That’s IT! On the newest generation of artists in ...

From the Pseudolithic Time to ..

That’s IT! On the newest generation of artists in Italy and one meter eighty from the border

Almost a year after the beginning of his leadership at MAMbo, Lorenzo Balbi presents his first major institutional exhibition in the Sala delle Ciminiere, an ambitious project in which converge the intention to redefine (even architecturally) the museum as a privileged window on the artistic languages of the contemporaneity received in the moment of their making and the desire to strengthen its role as a propulsive center of artistic production. To accentuate the osmosis between the city and the museum, a previously darkened arched window has been opened to allow to see the exhibition activities from the outside, placing the museum as an ideal continuation of the arcades that connect it to the urban fabric, while two new openings inside mark the connection between the permanent collection and the area dedicated to temporary exhibitions.

That’s IT! On the newest generation of artists in Italy and one meter eighty from the border (the title recalls the verses of Arte and Confini in which Bruno Munari in 1971 anticipated the intellectual fluidity of contemporaneity) is an exhibition that brings together the works of 56 artists and collectives born after 1980 and united by an Italian identity in various ways understood as citizenship, origin, formation or cultural affinity. It is clear from the beginning that, while the rigorous application of the generational criterion identifies the creativity of the Millennials as a precise field of investigation, the variety of the possible combinations between place of birth, study and work returns the concept of origin in an open and magmatic perspective that raises questions rather than certainties. To make this overview as relevant as possible to the sensitivity of the artists involved (whose selection, underlines the curator, wanted to be a sampling without any pretension of exhaustiveness) no constraints of expressive means were imposed and each was asked to propose a work that best represents the characteristics of one’s own poetics. The result is a polyphonic orchestration of different voices and points of view that in the juxtaposition become choral: if the idea of Italian identity suggested by the title, in which perhaps the protagonists can no longer recognize each other, slips into the indeterminacy of a latent thought, some shared lines of research, language, inspiration and poetics are clearly outlined.

First of all, there is an interest in documenting the dynamics of the present and hypothesizing their most authentic historical and social contextualization regardless of the systematizations of the official communication: emblematic in this regard is the work of Orestis Mavroudis, a video montage of all the sessions of the Greek parliament since the official beginning of the crisis in 2010 (the work will end on 20 August, the day on which the European bailout plan against the insolvent country will expire) from which the artist has extrapolated only the sequences in which the members of the various political alignment applaud to generate a surreal performative interpretation of the balance of power dynamics underlying the management of economic and social issues.

Tradition as a vehicle for connecting past and present and as a precious experiential baggage to be updated is at the heart of the project by Elena Mazzi, who in 2015 involved the inhabitants of Guilmi, a tiny town near Chieti, in the rediscovery of their ancestral magical universe restoring ancient rituals aimed at caring for people and animals. By reversing the anthropocentric perspective of these practices, the artist has experimented their miraculous efficacy on the real and metaphorical wounds of contemporary society, applying, for example, the traditional remedy based on oil, wool and hen feathers for the saffron (a skin disease today eradicated) to the landslide that surrounds the town isolating it from the rest of the region that no administration has yet been charged with removing for a precise calculation of political conveniences.

The landscape as a semantic field and terrain of ideological clash is the starting point of the series of safety glass screen printing in which Elisa Caldana draws up some urban architectural structures originally designed to be relational whose function has been denied by political reasons, such as the benches in Piazza Risorgimento in Pordenone, dubbed Piazza Tirana because it is a meeting point of the local Albanian community, arbitrarily converted into absurd modernist sculptures to make them inaccessible in an attempt to stem the aggregation of immigrants.

Also Margherita Moscardini reinterprets the historical survivals in the contemporary landscape in 9 films (6 of which have been produced for the exhibition) that document what remains of the fortifications of the Atlantic Wall, a defensive line built by the Third Reich along the Atlantic Coast. The artist reinterprets these ruins as abstract sculptures that continue to indelibly characterize the environmental context recalling at the same time the proliferation of walls and barriers with which in recent years governments are opposed to the new waves of migration.

Violence and war are an existential condition tragically rooted in the perception of our present, to which the most critically aware artists cannot remain indifferent. So Carlo Gabriele Tribbioli decides to leave for Liberia in search of the most frightening essence of war, understood as the primordial engine of being and as ineluctable dynamics that govern the structure of the universe. The work by Filippo Bisagni is similarly raw, linking the surprising iconographic affinity between a series of shots that document the torture of the US and CIA army in the prison of Abu Ghraib and some shots taken from Salò or the 120 days of Sodoma, a film-testament in which Pasolini condemns the authoritarianism of the mass media in a farcical parody of the Republic of Salò.

The atmosphere cools and becomes sensually artificial in a nucleus of works inspired by the new concerns and suggestions generated by the omnipresence of virtual reality, such as the self-portraits by Irene Fenara that show the artist’s frontal image recorded by several surveillance cameras, whose filming is obsessively put on the net on dedicated websites. The virtual landscape of the network and, in general, the errors and contingencies generated by immaterial technologies genetically engineered to be perfect, are the main interest of Emilio Vavarella, who presents a systematic survey of the Google Street View panoramas in search of the manifestations of technical problems of his algorithm. The result is a fascinating mosaic of screenshots (strictly printed in 13/9 format or its derivatives as the monitor used by the artist for his exploration) in which the visual inconsistencies created by the black holes of the system succeed each other in a coherent flow of chromatic and formal analogies that seem to postulate the existence of a new authomatic digital aesthetic. The great advertising narratives conveyed by the network are instead the focus of the work of the IOCOSE collective, which formalizes a critical research on marketing rhetoric through a video of “unboxing” that illustrates the characteristics of unrecognizable technological products that after are literally “launched” by the artists in a snow-covered field decreeing their definitive homologation and demystification.

The creative potential of the new media is plumbed by the Cool Couple duo, which offers an irreverent PES tournament inside the museum: taking advantage of the possibility offered by the Playstation to change the appearance of the players, the artists have created 20 football teams (complete with customized T-shirts and badges), each associated with an artistic movement from the Renaissance to the present, whose formations reflect the role and character of the artists belonging to the various groups. The intent is to detect the competitiveness that animates the art system and which conditions the economic evaluation of the artworks and to ironize the ineffectiveness of many artistic manifestations in arousing participation when compared to football enthusiasm. To football as a universal catalyst of strong and shared emotions which are immediately monetized also refers the work of Angelo Licciardello & Francesco Tagliavia, a tapestry that immortalizes the desperation of the players of the Italian National team at the end of the Italy – Sweden match which decreed their definitive exclusion from the 2018 World Championship. This emblem of failure is caustically framed by the brands of the sponsors who had already invested huge amounts of money in the image of the losing team.

A certain strand of artists instead favors conceptual interventions that are camouflaged in the materials to which they are applied, such as the marbles of Caterina Morigi or the fusions in which Elia Cantori condenses mental processes and physical properties of matter. Some, like the Kosovar Petrit Halilaj that despite his young age already has a participation in the Venetian Biennale and a solo show at the Hangar Bicocca, introject materials and objects taken from the real to create intimate narratives and self-representations. In other cases the object becomes a desecrating element, anecdote and exemplary case, such as the curtain created by Roberto Fassone made of 13 strips of sheets he used for a walk in the streets of Rome where he was accompanied by 13 people dressed as ghosts to give an idea of what would happen if all the dead were present on earth (recent studies claim that 107 billion people lived on the planet, which means that for each of us there are 13 dead people).

This is only a possible path for reading an exhibition full of issues and ideas that offers an embryonic recognition of the most contemporary artistic languages: while it is still premature to hypothesize their further developments, given the rapidity of the epochal changes we are going through, it is clearly outlined the vocation to the projects of the involved artists, representatives of a generation that looks at reality, aspires to the museum and cannot easily be attracted by utopian digressions.

That’s IT! On the newest generation of artists in Italy and one meter eighty from the border
curated by Lorenzo Balbi
June 22 – November 11 2018
MAMbo – Museo d’Arte Moderna di Bologna
Via Don Minzoni 14 Bologna 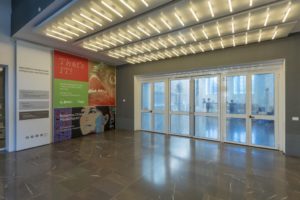 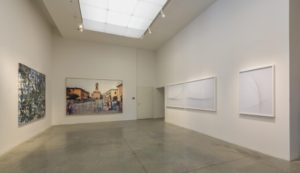 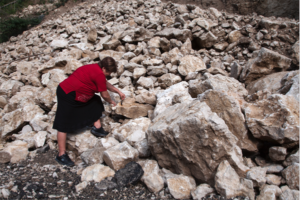 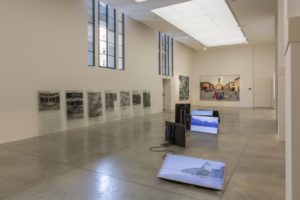 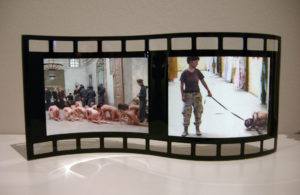 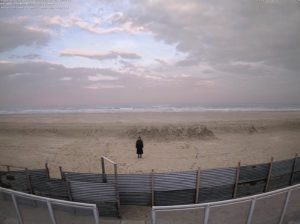 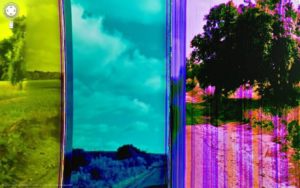 Emilio Vavarella, The Google Trilogy – 1. Report a Problem, 2012, photographic prints on paper and aluminium, courtesy of the artist and GALLLERIAPIÙ 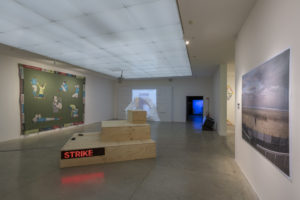 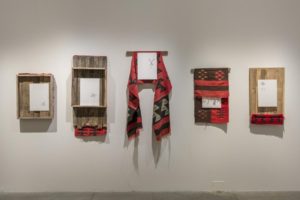 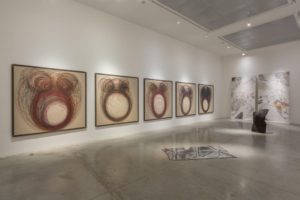