A cosmic vulnerability: the Mo..

The aerial and geometrical logic of the landscape ...

It would be useful to ask whether Paul Cézanne was foolish or wise when railing against excessive pictorial academicism by asserting «to copy… to copy… yes… There is nothing but that. As for me, I just want to lose myself in nature […] to have the same harsh tones of the rocks, the rational obstinacy of the mountain, the fluidity of the air, the warmth of the sun».[1]Therefore, on this line of interpretation nobody pushed beyond Cézanne, capable as he was of perceiving that nature did not like to hide itself in its peculiar views, but to reveal itself through sensations without any intermediation. This such attitude, which for Cézanne was an infinite getting lost in the landscape, is also evident in the works of the artist Brian Scott Campbell (1983, Columbus, Ohio, USA), whose works are on display at the exhibition When the trees touch the clouds, at the Richter Fine Art gallery in Rome, from May 24th to July 29th, 2022.

The solo show is developed throughout the gallery spaces, characterized by a renewed and wide exhibition area, thus defining a clear installation preference, for some questionable, as in one space the works on canvas are exhibited, while in the other there are the drawings. In this regard, it could be objected that it has been a long time since such a balanced exhibition had been proposed in Rome, if only for the wide spectrum of works on display, considering precisely how such an offer represents a reason of interest for the careful qualitative selection of works. The artworks, in other words, consciously invoke a stimulating choice that matches the philosophy of the gallerist Tommaso Richter, who is not bound to choices subject to the classic rules of the art system. This is also the result of an independent poetics of the gallery, which is used to promote exhibition projects that are culturally concrete, convincing, and strongly ciphered by their organic character. The latter acceptation can be referred to all the artists who usually exhibit in the Richter Fine Art gallery rooms, as authors of appreciable contributions created in perfect harmony with human nature, that is, by auscultating the vibrations of their own organs, firstly the belly and simultaneously their heart and brain.

Returning to the Roman exhibition, it must be said that the artworks are capable of fully revealing the artist’s expressive characteristics, such as being able to delineate an always consistent creative course for both canvases and drawings, as well as being capable of generating intuitive images, thanks to the basic coloring characterized by diluted, planar and synthetic brushstrokes. Traits arranged in a condensed and uniform manner on the pictorial background, differing from it only by the sharp contour lines that enclose the landscape forms within slats. From here it is easy to infer how the virtuosities devised induce toward an original and autonomous pictorial model, placing themselves precisely along the lines of what the philosopher Alain Roger said about landscape painting, when he exhorted «what a bore, what a mess! The artist’s vocation is to deny it, to neutralize it with a view to producing the models that will enable us on the contrary to model it».[2] In other words, a model, the one by Campbell, that induces him to work on medium-sized canvases, characterized by a formal reduction not focused on signification, since his landscapes live autonomously in associative chains, without being subordinated to any story.

In this way, the artist portrays from the landscape what manifests itself only phenomenally with a deliberately pure style, and here the light-soaked strokes seem precisely those of a “child” following an aerial and geometric logic, adept at bringing back the fluidity of natural environments. Here, then, behind Campbell’s innocent perception, a streamlined, fluid and decidedly two-dimensional painting is generated, likely apt to follow an unveiling of the formless[3], perhaps revealing something that is cleverly concealed. Thus, the artist does not give up showing us, even if in synthesis, vaguely formless landscapes whose profiles rotate placing themselves at will in perspective. This way, areas of color advance and stabilize in a spatial designation like scraps of tonal patches with harmonic agreement, to represent a natural environment at once limpid and rhythmic. Just so squares and reversals of planes magically become the most advanced forces of visual sensations in which the viewer – wanting to quote the accompanying remarks to the exhibition by philosopher Giuseppe Armogida – «It looked like we saw… pure illusion, insecure use of an insecure something»[4].

However, far from any vague assumptions, the expressive force of Campbell’s works lies in the drawings, an interesting selection of which is finely displayed within neutral wooden frames in the gallery’s new environment. Here it becomes even more evident that for the artist such practice does not stand as a sideline activity, characterizing itself, instead, as a manifestation of a vital practice, as a means of transcribing the world. The works demonstrate with vigorous eloquence, just as much as the paintings, that Campbell is capable of locating an autonomous spatial situation such that the forms of life are restored to a suspended sky of essences. For that matter, the artist himself relies on drawing practice while not renouncing to be visionary, as with a few lines of graphite on paper he defines dynamic accentuations in which the contour lines, broken in some parts, hold up only seemingly incompletely and precariously a landscape that disintegrates in different directions. Hence, the variegated handwritings of the sign hold primarily to suggest and not to write a landscape; precisely because, Campbell likely works by intuition, performing the construction of a new spatiality, in which the only element that differs is the granularity of the graphite aimed at avoiding contours, which seem to be scanned by the artist as a dark threat.

It is now easy to understand that such a particular tangency of path, uniting works on canvas and drawings, brings out instantaneous elaborations aimed at leaving no residue, with an effortlessness that benefits the viewer’s gaze with its attractive and enigmatic suspension. Since the artist’s main goal strongly remains to abolish the excess in order to focus on the essential, such as the interleaving of space, he constructs uninhibited montages by staging landscape dreams endowed with solidity and stability, as if we are confronted with the slow motion of a “moviola” on a view that really flows adagio.

Now, reaching our conclusion, it is easy to remark that Campbell chooses to execute a landscape digression that is possible to live and breathe only on the basis of clings of spatial grafts; a fascination – in other words – towards the landscape that is just as the one which Paul Cézanne lived, in a stubborn and immersive way, according to whom the artist was nothing but a receptacle of sensations, a brain, a recording device[5]. 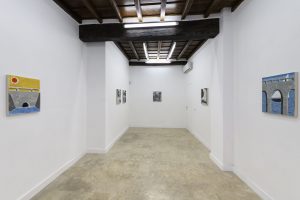 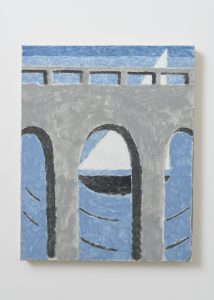 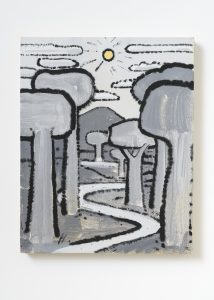 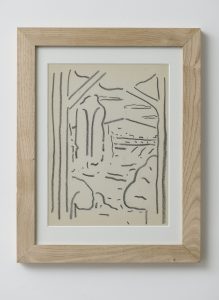