The other universe of Michele Zaza

The other universe of Michele Zaza

Last December Galleria de’Foscherari, located in the historic center of Bologna, presented the first solo exhibition of the Italian artist Michele Zaza. An excursus of works whose communicative, familiar and immediate intent becomes clear and redundant in the succession of the most varied pictorial means used. It is precisely the variability of techniques that characterizes the work of this artist: sculptures, photographs, installations, wall paintings interact with each other in an attempt to form a new universe of reference.

The main objective for Zaza is, in fact, that of building a universe that acquires its independence and that definitively moves away from that usually known by mankind.

It is no coincidence that the reason for astrology becomes dominant already in the first, and most recent, work “Cosmic Secret” (2018). Here objects belonging to the most basic everyday life, such as bread crumbs, are glued to the wall and transformed into orbits, on which the planets can move. Leftovers from that consumer society that the artist finds himself directly experiencing and which, with all his artistic strength, tries to dismantle.

The intent is, in fact, to restart, through a drastic process of regression and impoverishment, from what is simple and essential. It is through this absolute renewal that the viewer is faced with something that is, at the same time, familiar and foreign to him; clear and mysterious. The result of this ambivalence is a state of suspension and reflection in which the individual finds himself immersed.

For example, the shape drawn on the wall, of a very dark red color, recalls that of a house and therefore appears to be something familiar. However, within the identified section, star-shaped objects are loaded with ambiguity. Not being able to decipher their location, as well as their identity, a sense of total estrangement is favored in the individual.

The suspension status is further amplified here by the interruption of the celestial path inside the same house. A suspension that returns in the second work presented: “Foreign universe” (1976). Here the visual and gestural contact between father and son is interrupted by the white space between the two black frames. Each frame delimits the space of a ﬁgure, first the father and then the son, intent on mutually blowing soap bubbles.

The conversation between the two becomes light and airy. As proof of this, the use of soap bubbles with which children are used to having fun. A form of fun, therefore, simple and essential, far from the continuous desire for possession that characterizes contemporary society from childhood.

The white space of the wall is also dotted with numerous frames in different colours, inside which there are photos of bread crumbs. Therefore, the way in which the different works of Zaza interact with each other is significant, despite the conspicuous distance of time in which they were made. For example, the work “Foreign Universe” communicates directly with the more recent “Cosmic Secret” thanks to the recurring use of breadcrumbs. Just as the movement of the orbits, traced in this last installation, is directly connected to the gestures of the artist and his wife in the photographic cycle “Inhabited sky” (1985). The movements with which they are immortalized are an explicit reference to the cosmic movement; while, the blue and white hues that cover their bodies are a synthesis of the ether. In this way, there is a total cancellation of the human figure which, becoming one with the celestial space, becomes the final stage of the overturning process implemented by the artist himself. 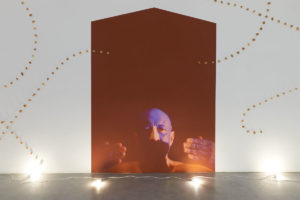 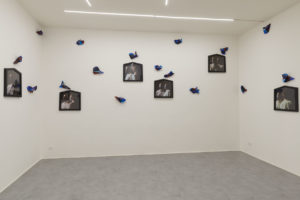 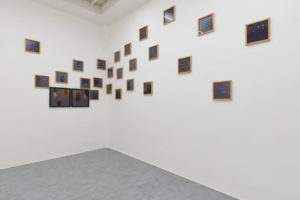