The spell of Damien Meade at the CAR DRDE gallery ...

Jesse Darling. No Medals No Ri..

Whether in the face of hieratic faces, or in those of the footsteps practiced in an unknown material, the sensation one feels when observing the works of Damien Meade is comparable to a sort of profound spell. One is almost dumbfounded in intercepting the gaze of the depicted characters, as much as in trying to follow the folds of the pink substance that animates the rest of the paintings. Even the titles, wrapped in the vagueness of the untitled – paraphrasing Alessandra Franetovich’s words from the critical text of the exhibition – do not give any exhaustive answer, nor any holds to hold onto.

The works presented on this occasion – the Irish artist’s second solo show, after the one organized in 2018 – all belong to 2021 and constitute the latest efforts in Maede’s favorite field from the beginning: that of painting. The difference is minimal compared to previous experiments, yet highly perceptible: the same categories of subjects that characterize his production remain – those, in fact, of the figures and of the affected material – but the ways in which the artist returns them change significantly. It is enough to make a quick comparison with the paintings from a few years ago to realize this: the rendering of the new characters moves away from the primary source that generated them – the sculptural sketches – to acquire a more austere and enigmatic aura, halfway between the surrealist sinuosity and metaphysical obscurity, while the substance protagonist of the second category abandons the polychromism of the previous examples to reach only the pink-complexion, gaining vigor and sensuality to the limits of eroticism.

In fact, as Davide Rosi Degli Esposti, director of CAR DRDE also affirms, this particular shade of pink is the identification of Meade’s painting, and has always been present in every work of him, even if only through small and imperceptible nuances. In fact, in addition to overflowing into the paintings, informal – “real canvases tempting a haptic taste for painting”, writes Franetovich – it can be seen penetrating into the tones that surround the mouth and nose of individuals, assuming, from time to time, reddish or purple shades depending on the intensity of the light, until they get lost in the remaining and predominant blue and silver colors.

Perhaps it is also thanks to this nuance – so human and carnal – if this last group of works is able to exercise the spell we mentioned at the beginning. What is certain is that it is a very powerful spell, assisted by the disturbing presence that, albeit vaguely familiar – they have eyes, nose, mouth, hair – remain closed in their silence, to scrutinize your every single movement undeterred. Is therefore the magic formula capable of evoking made up of their chest? What are the plots that make it up? Sort of armor or the whole of their entrails? Or zoo-phytomorphic conformations? And of their head, floating in indefinite backgrounds and separated, almost in an overwhelming way, from everything else; but it also consists of the sinuous agglomeration of materials, trapped in the flatness of the two dimensions, yet surprisingly alive and magmatic. The question that would haunt anyone is: what are they made of?

Once out of the gallery, and the spell stopped, no answer will satisfy our questions. But perhaps this is the meaning of Maede’s painting: to let you slip into the indeterminacy of its atmosphere, letting you savor every detail and every fold of what it reports, so as to instill doubt about what those figures wanted to tell and what could be hidden behind that mysterious substance. Basically, as John Berger wrote, “more radically than verbal dialogue, by its nature sight is based on reciprocity. And often dialogue is nothing more than an attempt to give voice to this reciprocity”, even when everything appears silent, imperceptible and indecipherable. 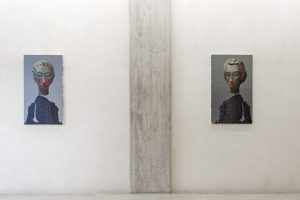 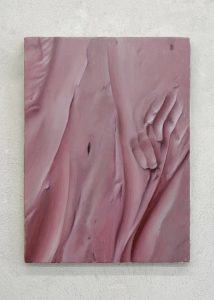 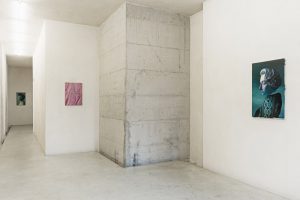