“Humpty Dumpty” is the name that Lewis Carrol gave to the impossibility of regaining an original state, despite every effort to do so. In this wake, Cyprien Gaillard’s two-folding of his exhibition HUMPTY DUMPTY, held simultaneously at the Palais de Tokyo and Lafayette Anticipations, introduces a breach in its timed experience: being here and now implies not being there and then. Nostalgia, grief, and threat assemble, amounting to a present bearing a worry that only imagination can ease. 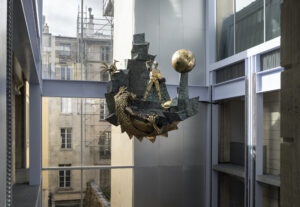 Le Défenseur du Temps, a monumental sculptural clock made by Jacques Monestier, was unveiled in 1979 at the heart of the neo-medieval and postmodern neighborhood called “Le Quartier de l’Horloge” (the Clock Neighborhood). It was slowly turning into scraps before Gaillard gave it a new life: dysfunctional since 2003, it only served as a nesting haven for pigeons to breed behind the Centre Pompidou’s back. Gaillard revamped the sculpture and exhibited it at Lafayette Anticipations. Its timely choreography is now seeable again: an armed man protects a clock (giving the time to passersby as it symbolizes the human realm) from the joint attacks of fire, air, and water, respectively embodied by a dragon, a bird, and a crab. Only the man, still wearing the excrement that show how time has passed, now protects a time moving backward on a custom soundtrack made of distorted radio hits of his moment of death. 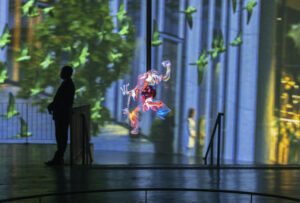 Le Défenseur du Temps, the focal point of DUMPTY (the second chapter of the exhibition), is the center of gravity, the central star around which the elements of HUMPTY gravitate, the first part of the exhibition presented at the Palais de Tokyo. L’Ange du Foyer (Vierte Fassung) (The Angel of the House), a ventilator invisibly and silently turning at first, bears once faced the hologram—a porous, immaterial image—of a weirdly moving monster. Borrowed from Max Ernst, the sculptor of Le Grand Assistant (The Great Assistant), an owl perched on a monumental pedestal marking the entrance of Le Quartier de l’Horloge when coming from the Centre Pompidou, the monster symbolizes fascism. A disturbing character, as if suspended in space, that seems to endlessly fall on itself, pinned on thin air, constantly gesticulating yet perfectly stationary. This paradoxical movement sets on Formation, a fly of parrots in Düsseldorf, that is to say, from point A to point B. The fly sometimes seems unending, as if it was a timelessly-running river. Formation, with its monumental and curving screen, includes the viewers in a forwarding flow, its cinematographic illusion of endlessness acting as a vector for movement. 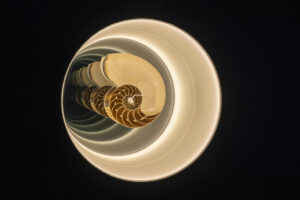 Near the entrance to the same room one of the two halves of a nautilus stands, the other is located in the previous space. Their internal spiral, displayed in front of a circular mirror, falsely pierces the looking glass with a continuous redundancy that creates an infinite perspective in a deceptive spatial depth. A circle turns into a spiral, only visually producing motion, adding to the paradoxes of stationary movement and illusive inclusion. Like the A and B sides of the same coin, the two halves create a spatial link, which here is immaterial, only amplifying Gaillard’s artefactual production of endlessness. In the same room as side A of this vertiginous setting, Ocean //Ocean projects onto yet another imposing screen. In this 11-minute montage of diverse but communicative visual and conceptual trajectories, archival footage shows disused subway cars being disposed of in New York Bay. The promise of a slow dissolving into the environment, as water and its faun integrate the urban wrecks into their world, these images form a dreadful example of time going in reverse. 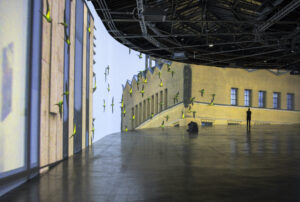 The two combined chapters form a postmodern concern: since the former Now, is gone, now is the time for a play on time. Gaillard’s work is a melancholic and dramatic play, which invites to cold reflections rather than expansive and enthusiastic emotions. His marble plans, built to last in a permanent cold, seem to form a cemetery for painting as they all stand in their resemblance to tombstones, extending a road between life and death already opened by Love Locks right in front of HUMPTY’s doors. Love Locks: : uncherished bags of the most intimate, loaded, eternal, symbols of love, which however accumulate, serially and randomly, on the grids of the Pont des Arts, to force the cyclical removal. These obsolete, deactivated-yet-still-closed locks, corny and sincere, yet shown in a cynically archeological setting as they lie in bags taken from building sites, effectively introduce the viewers to HUMPTY. They seem to whisper that their unexpected, undue resting place awaits long-lasting and ephemeral alike. 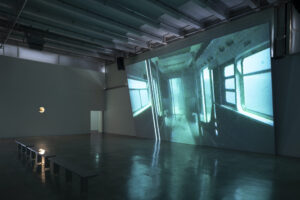 Between the Palais de Tokyo and Lafayette Anticipations, Gaillard gathers his fragmented attempts (pictorial surface, drawing, sculpture, video, hologram on fan, photography) to capture time, only to feel it slip. Yet it densifies, now palpable. The fragments are progressively building the drama: time exists only when it leaves, it exists at last as one of the many coordinates infusing in the entropic nature of our existence. Entropy is the constraint of a human life that only happens to the extent of its remoting, building as it falls: going, in both senses of the word. The theme was dear to Robert Smithson, under whose patronage Gaillard places his work next to his Ocean//Ocean: the imprints of sewer grates in New Jersey, which is Smithson’s native town, record a trace of humanity by exposing both a marginal state next to New York, the quintessential city and the paradigmatic relationship to nature that characterized Smithson’s meteoric thought and artistic practice. In an adjacent room, Smithson’s drawing of a sanctuary in an abandoned quarry places love for the lost in an unequivocal perspective. The inscription “ABSENT” is drawn on the first work of the series exhibited by Gaillard. 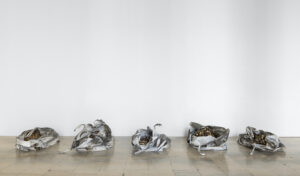 Marcel Proust’s Time Regained (which is comparably to Smithson’s masterpiece Spiral Jetty and Gaillard’s HUMPTY\DUMPTY) is the impossible but fertile challenge of finding what is lost anew, if not again, or to figure out how to turn on fire from its ashes. Originally longing for the maternal tenderness towards a child he is no more, Proust built a kaleidoscopic and swirling aesthetic made of moments, impressions and interrelations between the inner realm of thoughts and the subjectivities-filled, society world. This ever-enlarging coil ultimately tends toward a pool of memories for his quill, writing the history of his inability to be what he now becomes as the attempt develops. These coming-of-age dialectics and tensions between presence and absence, potentiality and realization, separated yet interconnected parts of time, are embodied by Gaillard in impossible grasps, vanishing permanences, illusions of infinity, and cemeteries for time-proven elements. Depths that are most perceptible when the second chapter, DUMPTY, sheds light on the first one, HUMPTY. Condensing Cyprien Gaillard’s take on time, the reverse sidebar in HUMPTY\DUMPTY – the exploitation of a crack between future and past turning crimson into bittersweet, therefore creating a livable now – then comes as no affectation.