Daniel Buren in Mexico, at Gal..

The truth told by Teresa Margolles at the Mattatoi...

OTHER IDENTITY | The "lockdown..

The truth told by Teresa Margolles at the Mattatoio in Rome

I have always been interested in understanding the cruel war that has been going on for years between Mexico and the United States of America. In this story, in which the USA “dresses” as good and fight against the ruthless Mexican drug trafficking, it is now difficult to determine who is wrong and who is right, and it is even more difficult not to think that both sides are stained with guilt even at the expense of justice, in the name of a political or economic convenience. Certainly, I don’t want to put the policies of the two Countries in the dock, neither I want to elect winners or losers, but I would like to recount, trying to stay above issues they don’t know so well, the most heartbreaking but not so resonant aspect of this bitter struggle.

Every traumatic event brings out the best strategies and often the word that turns out to be most truthful is that of the strongest, or of those who make themselves the bearer of some concept of justice. Contrary to all expectations, one of the artists who is more involved, through her works, in the action of denunciation against the violence generated by the Mexican drug war is Teresa Margolles, born in 1963 in Culiacán, in the State of Sinaloa.

The artist condemns the inhumanity of the violence that lingers in the Mexican streets, acts as a spokesperson for choked truths and for the denial that follows certain events. Her work, which takes on a performative and conceptual matrix, while maintaining a purity of message, manages to be the spokesman of testimonies that, without this intermediation, would fall into oblivion. It’s true, Margolles’ works don’t explicit names or photographs, they don’t give faces to the victims, but they give asylum to their voices.

In Italy, the echoes of such brutality arrive as faded and this war, although still very actual, touches us without shaking us too much. Mattatoio di Rome, however, offers a wonderful opportunity to meditate on the theme, involving also situations inherent in the roman territory. The institution presents Periphery of agony, an installation by Margolles, which is part of the three-year program Sensitive Devices, thought by Angel Moya Garcia and that we can define as a broad reflection made through the practice of art.

The entire pavilion 9B, which has been painted in red for the occasion, is occupied by the installation. Before being able to visit the exhibition, a sort of antechamber prepares us and a sign warns the most sensitive visitors to think before continuing, as before their eyes they will find brutal truths. A multitude of industrial red plastic curtains (an element already used in the past by Margolles, in other shades), wrap and tighten the space in a vise that alienates from the outside world. The atmosphere becomes rarefied and one does not have time to understand, nor to acclimatize, because at the center of the space a very large backlit table houses a fabric used to cover the bodies of the murdered Mexicans. It is necessary to walk along the table but it is not easy to do so at a fast pace: every detail, every yellowish shade, every stain, that is repeated several times until it disappears, are the fruit of who knows what pain, and they have wrapped up bodies that have been torn apart and deprived of any dignity.

I walked on both sides of the space several times and counted my steps: eighty-three feet on each side. It is not an objective measurement, the sheet is twenty-three meters long, but I walked slowly through the room, trying to take in every fold and every stain. I crossed this huge red space, emblem of spilled blood, and I found myself in a room with a large sign: “See, hear and be silent“, words about which there is little to argue.

Another small room hosts a video that portrays a sort of moment of preparation, a rite of commemoration of the victims. An action developed in three phases: lifting slowly and delicately, supporting for a few minutes and finally laying the large cloth on the ground.

In order to leave the pavilion, it is necessary to retrace the same path in reverse, and once again one must confront a cruel truth. The visitor’s imagination, tried by chilling visions, must absolutely be put to test as this is the only way for which one can choose to be witnesses or silent accomplices.

Today more than ever, this exhibition is relevant and emphasizes the most important role of art, which is not only the symbol of memory and culture, but it is the essential means that helps telling bad truths. 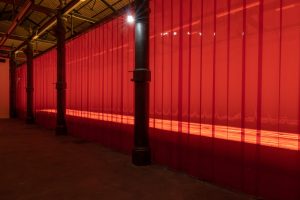 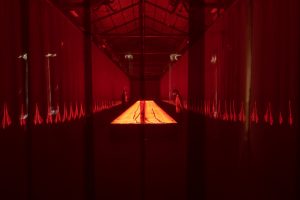 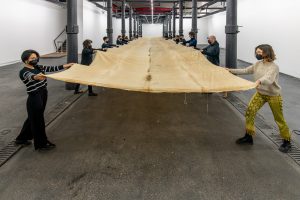 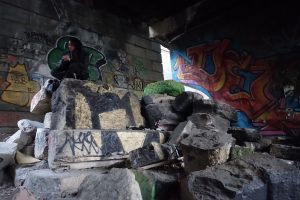