Mirko Rajnar’s thoughts and wo..

The vision through by Flavia Albu in the spaces of...

The vision through is the title of Flavia Albu’s exhibition in which she presents, for the first time in its entirety, the Curtains series, curated by Marta Orsola Sironi, which traces the artist’s work since its beginning. Large paintings, installations, and videos attest to Flavia’s research, which is aimed at exploring the structural elements of painting and the act of looking. The exhibition has been installed in the frescoed rooms of a seventeenth-century palace, the headquarters of Golab Agency that, in addition to offering communication and visual design consultancy, it hosts exhibitions by emerging artists and often outside the mainstream circuit.

The vision through will remain open to the public until 28thApril, in via Fatebenefratelli 5, in Milano, just a few paces away from the famous Jamaica café, which, since the beginning of the Twentieth century, has established itself as an intellectual salon and meeting place for artists and creatives, such as the poet Giulia Nicolai, the photographer Ugo Mulas, and the writer Ernest Hemingway.

Born in Suceava, Romania, in 1991, Flavia has been living and working in Italy since 1993, where she achieved her master’s degree in Painting at the Brera Academy of Fine Arts. «I would say that Pittura Futura (2016), with a critical text by Alberto Mugnaini, is the exhibition that marked the beginning of my path as an artist», Flavia comments as she begins to guide me through the exhibition.

Entering the first room, a black drape is lying in the ground, Fallen Drape (2020) – as black as the blackest black in the world by Anish Kapoor – that dialogues, in a language all of its own, with Untitled (2021), the oil painting hanging on the wall in front of it. Both works function as an integrated system, a duet in perfect synchrony. The vertical brushstrokes evoke the artist’s gesture and help me imagine her at work, in her studio. The multiple shades of blue – Klein blue, cerulean blue, sea blue, royal blue– remind me of Irma Blank’s series Radical Writings (1983-1996), even if in a completely different vein of research.

«I couldn’t say exactly in which artists I’m most curious about», the author replies to my first question, gazing upwards to the right as if reflecting. I approach the fabric lying on the marble floor in an attempt to concretize that tactile sensation that the cloth transmits to me. Meanwhile, Flavia continues, «I am actually interested in very different researches. I could say Anne Imhof or Gerhard Richter, for example, but surely the focus on the device of representation always remains essential to me».

The exhibition continues, and, in the background, I hear the mumbling of keyboards, WhatsApp notifications, and the voices of the agency team at work. This grip on pragmatism comforts me because I can finally see art coming out of the legitimized system of fairs, galleries, and institutions, where often the unwanted “pierrage” occludes any possibility of really looking at the works.

I continue my visit through The vision through on my own. In the meantime, Flavia moves away in order to catch the thinking that an art critic, Jacqueline Ceresoli, is offering aloud about the effect of natural light filtering through the large windows on the paintings. First, I listen, then, I linger in the most majestic room of the Golab Agency offices, in this space, her works have found their own hic et nunc. I dwell on the angel. It is impossible not to think of Paul Klee’s Angelus Novus. However, this painting is different from the others. In terms of style or theme? I don’t know, from my phase as a university girl in Buenos Aires, I have been impressed, word for word, by what my Semiotics professor used to repeat in every lecture: «Even in abstract art, it is possible to grasp a theme or motif when you look at the production as a whole». I observe, I approach, then I move away again. I don’t know what effects of light the critic was talking about earlier, but this particular work struck me.

Perhaps the curator sees me puzzled. Marta courteously approaches and introduces herself. She doesn’t know me, but I have been following her career for a long time: first an archaeologist, then an iconologist, and finally a curator of contemporary artists whith who she bonded in the dark corridors of the Accademia di Brera while pursuing her master’s degree in Curatorial Practices. Then she comments: «It is actually a reflective painting. Visibility and invisibility, duality and ambivalence return in this work – she skillfully and passionately explains – what looks like an angel is actually the pattern traced in the sky by a show of military planes».

For some reason I get lost in the tangle of my thoughts and Lacan’s theory about the “slippage between eye and gaze” comes to my mind. It sounds beautiful, maybe even clever, but to be honest, I wouldn’t know from which hemisphere of my brain these words surface and I wouldn’t be able to explain them. Perhaps, as Jorge Luis Borges said, everything has already been written and consequently said, done, and painted. And yet, this conviction never deterred him from creating. 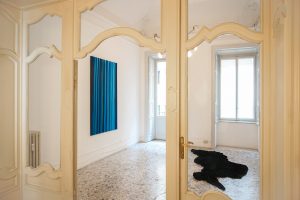 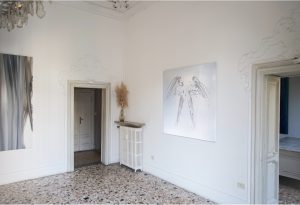 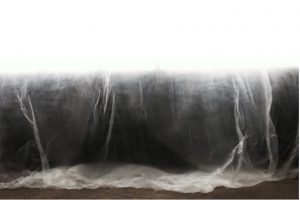 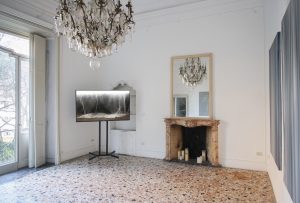 Installation view The vision through, 2022, Golab Agency, Milano. Courtesy BeAdvisors and the artist