The visionaries of the packaging: Christo and Jean...

The visionaries of the packaging: Christo and Jeanne Claude

More than we imagine contemporary art offers visions and themes that affect many aspects of our life. Vice versa, the questions of life influence the visual arts in a decisive way. If we talk about contemporaneity, we cannot fail to walk the paths of assembly and packaging. We live in a remarkable and unaware accumulation of objects of various types that have somehow gone beyond the process of packaging. Objects capture our attention both in the real and in the virtual world. To give an example, in our shopping centers, we celebrate the aesthetics of objects between packaging and assemblies.

Have you wondered how many times have you dealt with packaged items? At this point, you will be thinking about what this talk has to do with contemporary art. Got to do it! Everything related to everyday life and our ways of living is perfectly incorporated in the perspective of contemporary arts that become the place of amplification, the echo of discomforts, obsessions, habits and qualities of our being in the world. In this regard, I present the first artists who packed islands, coastal palaces and bridges. I refer to the well-known visionaries, Christo Yavachev (Gabrovo, June 13, 1935 – New York, May 31, 2020) and Jeanne-Claude Denat de Guillebon (Casablanca, June 13, 1935 – New York, November 18, 2009). They used the logic of packaging, using huge sheets of white nylon or fabric.

Their visions have also taken on a political and historical character because packaging is a form of visual censorship that renews not only the covered object, but the way of looking at it. Cathartic change, in fact, for those who stand before Christo’s works, is in the gaze, in the direction of the observer through a form of separation between what is covered and what will be revealed. It is evident how extreme the choice of Christo and Jeanne-Claude was, with colossal installations of “environmental art”, to highlight the ability to show, hiding and covering, also inspired by the theories of Joseph Beuys and Man Ray.

In the idea of ​​the couple, everything around us, the vision of any landscape, can undergo a variation: a subtraction of the vision itself. Today it would be called the packaging filter, to speak in a current language. They did it with macroscopic operations, they exacerbated the boundaries, times and actions of the micro world on an exaggeratedly macroscopic level. Think of colossal installations such as “Wrapped Coast” (Sydney, 1968-69); “Wrapped Reichstag” (Berlin, 1995); “Surrounded Islands” (Florida, 1980-83), “The Pont Neuf Wrapped” (Paris, 1975-85), created before the fashion of shopping centers and even before internet, available to all, and from the online sale itself, which is based on the logic of shipping and packaging.

They created events that attracted a huge number of observers in addition to the necessary collaboration of expert climbers, with all the necessary technical structures prepared for the realization – with permits and authorizations – with very short exposure times to the public compared to the ideational and organizational phase that it lasted for years. They used the landscape – coastal, islands, palaces – to cover them with huge quantities of nylon or fabric, forcibly changing their appearance.

On a conceptual and symbolic level, they have also given extreme form to the idea of ​​a generic object, which in order to exist and be marketed in our globalized market, only needs to be packaged. Metaphorically, any aspect of the world can be submerged and covered by a symbolic nylon covering if people do not learn to choose and look well, that is, to discover and reveal. If we consider contemporary art as a possibility of producing visions capable of changing the way we look and observe what exists around us, we would perhaps have a smaller chance of having our eyes packed by the greed of our objects. And who knows, maybe, the next time we release an object we have purchased from the packaging, we will think of two visionaries a little out of the line, like Christo and Jeanne-Claude Denat who remind us all of the opportunity to unveil and unpack the perception of the world itself. 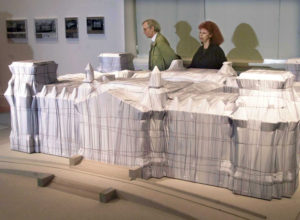 The artists Christo, left, and Jeanne-Claude, right, tour their exhibition at Berlin’s Martin-Gropius-Bau, Thursday, Sept. 6, 2001. The exhibition shows the early works of the couple as well as their long-time projects as the “Wrapped Reichstag” foreground, which was realised in 1995. (AP Photo/Jockel Finck) 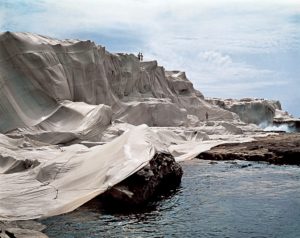 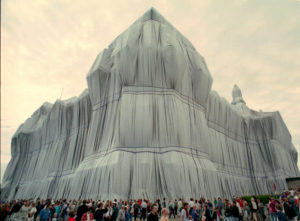 People gather to see the wrapped Reichstag building in Berlin Sunday, June 25. Hundreds of thousands tourists will be expected to visit the project “Wrapped Reichstag” by artist Christo and his wife Jeanne-Claude. The edifice will remain wrapped until July 6. (AP Photo/ Jan Bauer)