The ZigZag Protofilosofia by Ivana Spinelli at GAL...

Between 7000 and 3500 BC in Europe there was a matrilineal social organization characterized by gender equality and substantial absence of hierarchy and centralized authority. The Lithuanian archaeologist and linguist Marija Gimbutas (1921-1994) had coined to identify it the term “gilania”, born from the combination of the Greek roots gy (woman) and an (man). Through thousands of archaeological reliefs on vases, statuettes and prehistoric furnishings, she had identified a catalog of 45 recurring signs, usually interpreted as decoration, and had reread them as elements of a language common to the populations governed by this system. In the essay The language of the goddess Gimbutas reflected on the correlations between these graphics, formally inspired by nature and the body, and the culture based on the life-death-regeneration cycle of which they were an expression. In particular, Gimbutas found a generalized concept of fertility understood as earth, exchange, movement – therefore not uniquely identified with the female sphere – and a consequent all-inclusive vision of the goddess, not only idolized as an ancestral mother but also as an apocalyptic destroyer. The political importance of women in the organization of society and equality between the sexes found their foundation in this archaic mythology and were confirmed by the sign language, originating from the various combinations of the same basic sign “V” (stylized bird’s beak or pubic representation). Between 4300 and 2800 BC this system would have been supplanted by another Neolithic culture, that of the Kurgans, a warlike androcratic and patrilineal society which arrived on horseback from the Volga region. This radical cultural change led to the progressive obliteration of the previous system of signs, which lost the value of language and managed to survive in a latent state as a decorative pattern, handing down to today the residual unconscious of that ancient civilization so insidiously different from our stereotypes.

The ZigZag Protofilosofia (2017-ongoing) project by Ivana Spinelli, currently the protagonist of the exhibition Contropelo at GALLLERIAPIÙ, arises from her chance encounter with Marija Gimbutas’ archeomithology on the occasion of a search for an artist residence in Sardinia and a fascination for the philosophic potential of this Neolithic civilization excluded from official Prehistory. The discovery that the archaic world was much more advanced and multifaceted than the categorisations in which it was usually simplified, gives rise to the idea to bring back its signs in the present with the aim of experimenting how they can be inserted in our language and what epistemological and cognitive consequences could trigger. Specifically, the strong life-sign-nature connection that characterizes the prehistoric graphics postulates a cyclic logic totally different from the binary thinking system that has shaped Western analytical reflection for centuries and which today reveals its limitations in the inability to understand in its categories a fluid world in constant hybridization. The systematic exclusion of animal and plant beings from the philosophical sphere has erected an artificial ideological barrier that has atrophied our ability to adapt and exchange with the “different” and that today, crumbled by the evidence, leaves us vulnerable to otherness.

Ivana Spinelli’s journey through space and time in search of connections with that type of thought therefore starts from the recovery of the signs that are the symptom and the germ, the first phase of which consists in a patient graphic exercise based on repetition and composition in tables and notebooks. This practice allows the artist to appropriate those ancient signs, to introject them into her expressive baggage and to intuitively learn / imagine a language of which a precise interpretation does not yet exist. Among all the signs cataloged by Marija Gimbutas she then chooses one, the zigzag formed by the juxtaposition of two “V”, the oldest pictogram associated with water, and translates it into different artistic media ​​to explore how the semantic differences between these transpositions suggest further and not unequivocal increases in meaning.

The first translation takes place on sculpture, with the creation of a series of habitable and mobile structures generated by the three-dimensional reiteration of the zigzag sign. Each sculpture is a sort of atypical container, as if it were a frame in which the work is inside or behind: it is therefore about bodies that welcome within themselves something else (artificial and natural materials in an ambiguous relationship), just as the sign contains meaning without identifying totally in it. The choice of the aesthetics of the materials is very calibrated: the wood is largely left neutral with subtle pictorial interventions, while the structures are modeled and assembled through an evident craftsmanship (in one case also animal craft) which dilutes the seriality with calibrated inaccuracies of the basic modules, differentiating them from the re-editions of modernist design that have raged in recent years.

Among the sculptural prototypes of the sign we find: Scaletta v ^ v ^ v feline sculpture (2020), crooked connection between heaven and earth supported by wadding clouds and by legs protected by wool socks, Portable Zig Zag (2019), stylized snake where synthetic shavings and quiescent plants nestle and Meditation place, (2020), litter born from the multiplication and the intersection of the “V” on which one can lie down to perceive the circulation of the void. The idea behind these assemblages of shapes and elements is to relate artificial materials (representative of our age) with a nature which in turn is imitated and hybridized with contemporary substances to find out which forms of complementarity can be established and which logics the new objects thus created respond to. The keystone and the unit of measurement of this process is the sculpture The Goddess, a sign that looks and remains v ^ v ^ v (2017), an apparently dry branch of ficus, overturned with the roots in the air and associated with a pink synthetic boa feather. This fragile attempt at grafting, exposed to all the risks of indefiniteness, explicitly alludes to the existence of a parallel society that historically we have relegated to a vegetative state equated to inertia, assuming a transversal communication between different realms not necessarily accessible to man.

The same reflection leads Ivana Spinelli to formalize the painting in nest-bags in which the hand-drawn signs become digital fonts and then stencils drawn in vector, whose shades dialogue with the present while the graphics derive from the digitalization of the archaeological reliefs. Even these receptacles, imperfect attempts to emancipate themselves from nature while remaining nature, arise from the idea of ​​linking separate areas together and experiencing the surprising implications of these combinations by hypothesising new models of atypical societies. The works in the Text, refuge for the living series (2020) are open wounds in which natural samples and small mimetic treasures are collected that borrow their forms from the vegetable or mineral kingdom but are actually resin reproductions of the absent originals. Nothing is definitive in these hybrid spaces of coexistence and gestation, in line with the intention to dialogue “on an equal footing” with all that history has decided to exclude from its narrative. The circle closes with the application for generating Zigo Zago Stickers (2018), in which the prehistoric signs revisited with updated colors and graphic styles, after going through sculpture and painting, return to be an instinctive and universal language to be used as emoticons in digital chats. 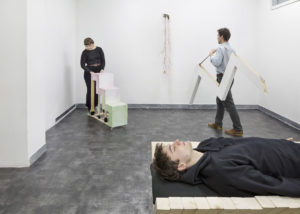 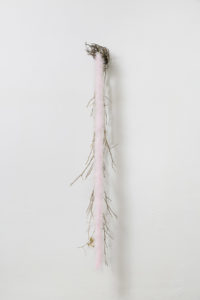 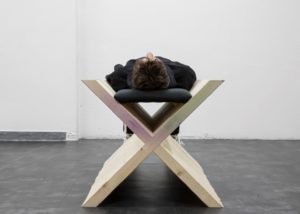 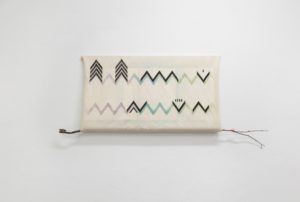 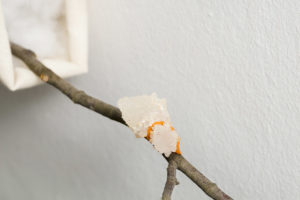