Aron Demetz at MARCA Museum in..

The MAXXI museum in Rome hosts the exhibition The Purple Line, by Swiss artist Thomas Hirschhorn until 6 March 2022. Set up inside gallery 3 of the museum, it is curated by the Chinese critic and curator Hou Hanru, artistic director of MAXXI, and by the curator Luigia Lonardelli. The name of the exhibition alludes to the theory of colors, to the purple color intended as the border between the spectrum of reds and that of violet. A border that intercepts the ‘pure color’, the most difficult to look at and the most disturbing.

The 118 works exhibited belong to the Pixel-Collage series, conceived between 2015 and 2017. These are collages created by the artist starting from “at least two elements of our world, joined together to create a new one, a world that did not exist before”. Collage according to Hirschhorn is a universal language, funny, easy to do and fast. It is the most used technique in the world. Everyone has made a collage at least once in their life. Pixel Collage combine professional shots, taken from fashion magazines or advertising campaigns, and images of massacres and battered people, taken by witnesses or passers-by without any aesthetic intention.

At the center of the exhibition is contemporary living saturated with images. Images that are often censored. Content deemed too strong or inappropriate is hidden from view in an attempt to protect the viewer. Censorship occurs through ‘pixellation’, a method that involves a political choice: establishing which part of an image to offer to the viewer and which to obscure, making it unrecognizable by modifying its pixels. Behind the use of ‘pixellation’ lies the authority that chooses what we can see and what not, what causes disturbance and who to protect from disturbance itself. Hirschhorn decides to overturn the common use of the pixel by using it to deny the vision of what is normally accepted and exhibited. Instead of hiding behind the pixel what is considered improper, acting as a moral, we see the reverse procedure: the models of fashion shots, designer clothing and accessories are censored in his works. Faceless subjects lose definition and brutally contrast with the tortured bodies, exposed in all their truth to the visitor’s eye. The result of these combinations is, in terms of contents, an unprecedented and stimulating arrangement of superficiality and depth, of abstraction and realism on the expressive level. A happy outcome that makes us reflect on the coexistence of opposites and its effects.

According to Hirschhorn, the use of the pixel to censor makes the horrors of war and violence acceptable. It allows people to watch horrible things while maintaining “their comfort, their calm and their luxury”. The use of pixels in the media is therefore hypocritical. Looking at images of tortured bodies is the only way to see violence, cruelty and war as they really are. Depressing and negative images, but is there another way of seeing war, one that is not negative? Censorship only allows us to make this more acceptable. But why should we accept it?

The artist wants to push us to develop a critical sense and a certain form of sensitivity, understood as the ability to be alert and attentive and to deal with reality without setting a comfortable distance. According to the artist, the danger facing contemporary society is that of hypersensitivity, a form of “self-enclosure and exclusion”, which prevents us from enduring the sight of reality. A reality that is often too difficult to accept to such an extent that we prefer to deny it through self-sedation and censorship.

The Purple Line takes the form of a path so complex as to be labyrinthine, defined by a purple wall 6 meters high and 250 long, designed specifically for the exhibition and conceived by the artist as independent from the museum structure in such a way as to affirm his emancipation. A wall that is a broken line, made up of sharp edges and obtuse angles. A wall that tightens around the visitor as if he were walking through an alley and then detaches himself to define larger spaces. A single architectural element that supports the entire exhibition and leaves the visitor with total freedom of movement in tracing his path. The set-up therefore does not include a predetermined path, an end or a beginning.

There are two formats of the works: a giant one that conquers the overall height of the wall by pushing the observer to move away from his point of view to take possession of an overall vision and a rather small one that invites you to get closer to fully grasp his content. Both formats stand out on the same support in a continuous disorienting oscillation between one dimension and another. 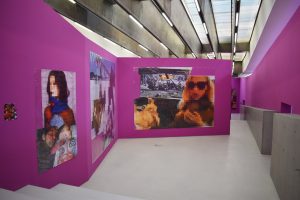 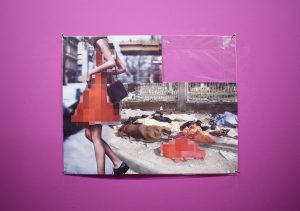 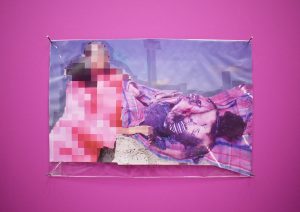 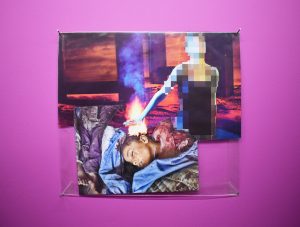 Born in Rome in 1992, she obtained a degree in Architecture from the University of Rome La Sapienza with a thesis in Architectural and Urban Design. She is interested in art and architecture and their mutual contamination.