Another Energy: Power to Conti..

Moira Ricci: the truth of the ..

Zeitz Museum of Contemporary Art Africa (Zeitz MOCAA) is a non-profit public institution whose purpose is to exhibit, collect and preserve contemporary African art. Alongside the permanent collection, the museum has large spaces to host temporary exhibitions and a project room for emerging artists. The Museum also includes the Center for Art Education and the Center for the Moving Image. The museum is housed in the former industrial building Grain Silo Complex at the V&A Waterfront (originally a set of forty-two concrete pipes 33 meters high, each with a diameter of 5.5 meters, and without any opening) converted thanks to the project of Heatherwick Studio. The current executive director and chief curator is Koyo Kouoh.

The permanent collection (all focused on the creativity of the artists who can be referred to the culture of the African continent because they were born and live in Africa or in other places or because they are children of the “diaspora” and live elsewhere) is very heterogeneous and three hundred and sixty degrees, and in any case it reveals a great attention to all possible variations and articulations. All this indicates a particularism that in some world seems to betray the “international” culture of the Enlightenment or a progressive socialist and unifying creed, to favor local traditions, even popular aspects or ancestral memories. A sense of redemption and reaffirmation of a past denied, and violated by colonialism or savage capitalism, seems to run through many of these works. On the tour we meet not only famous and celebrated authors in many international exhibitions, but also young and still unknown names; let’s take some examples: William Kentridge, Chéri Samba, Zanele Muholi, Kendell Geers, Abdoulaye Konaté, Ammira Kamudzengerere, Athi-Patra Ruga, Godfried Donkor, Kehinde Wiley.

Now, Zeitz MOCAA is involved in organizing the most complete retrospective of Tracey Rose (Durban, 1974, lives in Johannesburg), with works ranging from 1996 to 2019. The exhibition will include video projections, sculptures, photos, performances, painting. Tracey Rose is a radical voice in the world of South African and international art, given that her work can in effect be defined as “committed” or as a denunciation or revenge against white supremacism and male self-centeredness.

Her work, always tumultuous and overabundant, although it speaks of themes linked to the history of Africa (specifically not only its colonial past and the black / white man dichotomy, but also its traditions and identities) never gives the impression of being autobiographical, so much so that it can be said that this courageous artist gives voice to a protest that is more unanimous than individual. Her passion and her reinterpretations of the past lead to an overturning of the well-known figures of history, religion and contemporaneity, or rather to an “acting” in which the color of the skin often makes the difference. Her recited and performative poetry is a fantastic ritual: a cascade of often baroque variations, so much so that the fresco we are in front of is often transformed into an allegory, a translated and multilayered narrative. The style is perfect, every detail is very accurate, as an authentic observer of facts and people who wants to link every detail to the social, custom, historical, political and economic annotation or to the stereotypes connected to all these phenomena and to the role of women in the history of humanity.

And the body (often that of the author, even disguised as in a theatrical performance, but often also in its ostentatious nudity) becomes the vehicle of this subversive message, on which references to identity, gender, racial and gender policies are loaded. These performances, based on stage sets and on very accentuated (sometimes even dreamlike) disguises, can remotely recall the disguise methodology also used by Cindy Sherman, especially in the latter’s color series, but I would say that Rose, in this game of metamorphosis, is really on a higher step, right there where shet is capable of triggering, evidently for every slightly trained eye, a clear will to blame and whipping of a past brought back to the present: to our present. To a present never resolved and full of contradictions. 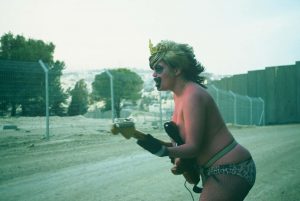 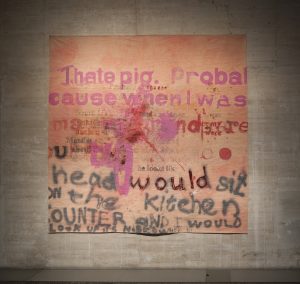 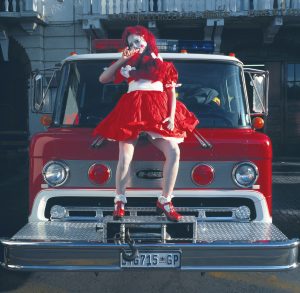