“Of My Abstract Gardening” by ..

The most difficult task of a journalist or an art critic depends on the context in which he finds himself, is not to exceed in linguistic or rhetorical virtuosity nor to enrich the content of the message of a work that appears immediate and synthetic or, on the other hand, uncomfortably conceptual, and that therefore requires a translation by an enlightened patient who explains its hidden meaning. The self-referential desire to give voice to the verb of art with the attempt to objectify an intrinsic meaning of a artwork does not respect sometimes the creative will of the artist. About that the painter Thomas Braida tries to hide it using the rhetorical instrument of irony with his new solo show Grandi Piccolini/The Shape of Paint to Come, inaugurated last April 9 at the MONITOR gallery in Rome.

If it is true as Agamben maintains that “irony is the faculty through which the artist tears from the world of contingencies and corresponds to that experience of his own absolute superiority over every content” it is  also equally true that the spasmodic search for an absolute and objective truth about the artwork is what pushes criticism to deepen and then pronounce to conquer a place on the podium of the elect.

The artworks of Thomas Braida, however, do not sin of this presumption. Certainly, the ironic key is present in his canvases which range from a small to a large format  but this offers a cue that if it will be caught obliges the viewer not only to observe the liminal layer of the pictorial surface. To find a point of discussion on what Agamben argued and stimulate critical thinking to further reflection, one could direct more attention to the content of the artwork than to its process, instead of dedicate it to the creative subjectivity of the artist. It is precisely with content that Braida’s painting is enriched with an immediately visual and often tangible one like the pictorial paste that appears sometimes stretched out evenly, sometimes emerging from the surface of the canvas instead. The coexistence of contrasting symbolic elements, typical of the ironic matrix, lays the foundations for a possible translation by the viewer. In a continuous reference to Greek mythology or to the modern pictorial tradition and to the constant relationship between the artist and the natural element, Braida painted a young Leda with dark and anything but white tones, immersed in a copper tank, which is revealed in the right room of the gallery, holding a dart in her hand like an Amazon, with her swan resting (Far from swans near salmon, 2022, oil on canvas, 220×185 cm).

Dark Teddy Bear (2020) overturns the iconographic tradition of the Dutch still life of the seventeenth century. If this represented the natural element in its maximum splendor, Braida instead expresses its transience. The organic matter is then flanked by the artificial one, typical of the rag bear, an element of our contemporary culture that coexists with that same tradition. The irony adopted by Braida cancels the idea of timeline and does so by introducing traditional symbols by inserting them into contemporary scenarios.

The theme of the opposite normally characterizes the ironic instrument concealing that objective truth which the criticism desperately tries to reach. For Braida painting is the only certainty as are the subjects he chooses to portray contrasting the almost dreamlike atmosphere of his canvases with the representation of bestial scenarios, frequently dominated by the feminine. In Kisses and Hugs(2021) a woman is bent over to brutally feed on a tiger, overturning again the traditional visual and semantic types where the beast becomes prey and the human ia the predator.

“Painting cleans, digs and cleans. It makes terrible things brilliant without making them beautiful, it sheds light in our and your darkness.” Interesting is Braida’s statement on the role of painting within the column I never explain #139 of ATP Diary to which he attributes an apparently salvific value as well as illusory to reiterate that it is painting itself that is ironic.

To conclude, it is natural to support what George Braque said in 1910, regarding the function of art: “We all know that Art is not truth [but] a lie that makes us reach the truth, at least the truth that we are given to understand”. An assertive attitude, which certainly does not respond to what Agamben claims. Irony in Braida’s canvases does not oblige the viewer to have to decipher any message nor to have to unveil any hidden truth. The choice in favor of a figurative painting does not allow to reveal, certainly, this «hidden truth» of the artist but offers a translation code, not at all simplistic, which has its roots in the cognitive capacity of recognition proper to the symbol. In front of a work by Braida, the viewer identifies the two symbols opposite in their meaning and deduces the message, satisfied and not anguished by the certainty that the pictorial sign expresses in its immediacy. 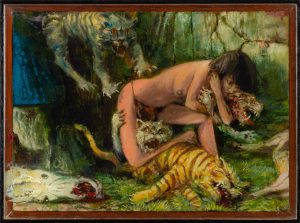 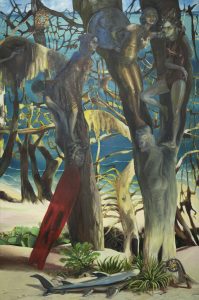