Between Order and Chaos: the P..

On 6 August 2018, a tank loaded with LPG gas, after a collision with a lorry carrying highly flammable solvents, explodes at km 4 of the A1-14 motorway junction near Borgo Panigale in Bologna. A fire with very high flames breaks out and eight minutes later it causes an uncontrollable explosion: the viaduct collapses, the surrounding homes and businesses suffer damage for millions of euros and the final toll amounts to two dead and 145 injured. On the same day, between Vincenzo D’Argenio and his current partner C., seated on a plaid with floral designs in the shade of a maple tree in the 300 Scalini Park on the hills near Bologna, the first kiss is taken. Immediately after this intense sentimental explosion, also fraught with (positive) consequences for their future, they hear the roar generated by the explosion of the tanker and see the smoke and flames of the fire from above.

The shocking coexistence of the two opposite events is at the origin of the Deflagrazione artist’s cut exhibition, which can be visited until August 20 at Museo Spazio Pubblico, a research center dedicated to the collaborative and transdisciplinary approach to the practice of public space between art, architecture and technology, recently founded in Bologna by City Space Architecture and Genius Saeculi under the artistic direction of Luisa Bravo. The project is the second step of a work that, after a long genesis, had landed in September 2020 in the underground rooms of Senape Vivaio Urbano, but which had only been visible for one evening because the night following the opening a violent storm had caused the flooding of the exhibition space and the partial destruction of the works on display. In this new solo show, the artist has restored the damaged works and enriched the exhibition with other elements that identify further fragments of the original narrative and also include the surreal story of its first presentation in the narrative flow.

Vincenzo D’Argenio works on memory through a narrative approach rooted in the meticulous search for details and the desire to rediscover the essence of the stories that he chooses to investigate with his practice in the detection and reworking of their material traces. Even after some time, the artist returns to the places where the events took place, discovering each time the possibility of new semantic superimpositions and new dynamics. Proceeding by fragments, he reconstructs and amplifies the memory making it explode into a sort of continuous present that opposes its natural obsolescence and transforms it into a map of objects which, assuming invisible connections between unrelated events, question the apparent dichotomy between individual and collective experience. Also this project, which reports his personal experience in relation to the news event, is configured as an essential ecosystem that suggests a vision of events as designated places, whose mysterious intersection assumes the value of a universal and intimate symbolic constellation at the same time.

The heart of the exhibition is an environmental-conceptual reconstruction: at the entrance we find a 1: 1 scale photographic replica of the flowered cloth on which C. and V. were sitting at the time of the explosion, made by a digital scan of the original and its visual recomposition in a mosaic of prints on fine art paper. This real element transformed into a photographic composition, which in the setting returns to be a sculptural object, lives in symbiosis with the carpet-grass already present in the exhibition space and with a vinyl recording of the sounds that form the sound identity of the 300 Scalini Park reproduced by a turntable, a retro device that seems to underline the romanticism of the two lovers with delicate irony. The third clue that completes the scene is a sculpture created by adding two transparent leaves in 3D printed liquid resin to a branch taken from the maple tree in the 300 Scalini Park, which has been compensated for the wound (and transformed into a work in progress) through inserts of gold leaf applied by the artist. The tragedy of the explosion is materialized by a projection of unpublished documentary videos recorded at the accident site by passers-by and rescuers inside a display of dried millet cobs (in Latin Panicum miliaceum), a cultivation once so widespread in Borgo Panigale to determine its toponymy. The contemporaneity between the two recreated events is emphasized not only by their spatial coexistence, but also by the overlapping of the two sound tracks, in which the song of the cicadas of the hills is at times overwhelmed by the scream of police sirens and roadside assistance vehicles.

Compared to the first presentation of the project, Vincenzo D’Argenio in Museo Spazio Pubblico adds a wall display that explains the clues from which his investigation began, where he juxtaposes documentary photos of the damage caused by the explosion, casts of the texture of the bark of the tree and tread of the accident site, copies of the front pages of the main Italian newspapers published the day after the crash and two positive and negative engraved plates reproducing the map of Bologna. A herbarium section brings together a sample of resin dust taken from the maple, a reproduction of its identification plate with its census number, the printing of an email exchange with the office of the environment and urban green sector of the Municipality of Bologna to ask for information on its history and a series of black and white photographs taken in various seasons and hours of the day that document the continuity of the artist’s visits to the tree. Precisely on the occasion of one of these “returns”, Vincenzo D’Argenio asks a child he met in the park to draw the maple and the enlarged projection on the wall of the child’s sketch appears on display as a further intertwining of lives and experiences.

The exhibition itinerary ends with a video documentation of the flooding of the first presentation of the project at Senape Vivaio Urbano and with the presence of some copies of the photographic book created for that occasion which brought together the materials now “exploded” on the wall in the form of object-documents. The books, submerged in water all night, now appear deformed, sealed and forever de-functionalized and are also presented as artifacts, accessible only in digital format via a password-protected QR code. This exhibition is also associated with an artisan publishing product offered to visitors: an envelope signed with a maple leaf stamp containing a handwritten letter from C. to Vincenzo and a critical text by Emilia Angelucci, the last visitor to the shipwrecked exhibition, who has been involved in its rebirth confirming how the artist’s interest in the stratifications of memory is translated into a free praise of coincidences and returns in which micro and macro events intersect without being subordinated to any hierarchy. 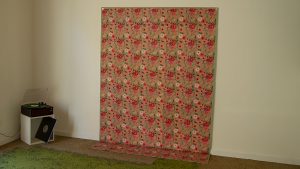 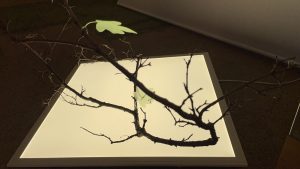 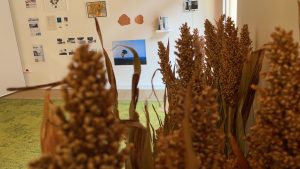 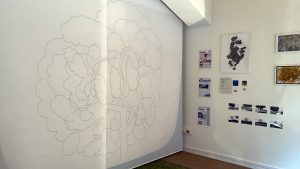 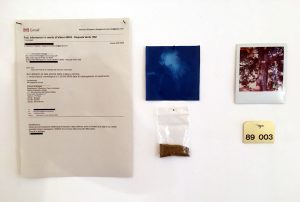 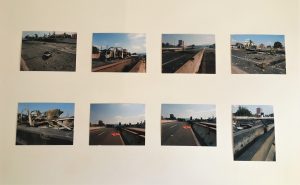 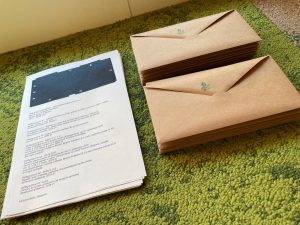