YAG/garage ITALIA is a research project that was born in summer 2021 through a research work carried out by the YAG/garage gallery in Pescara, with the aim of identifying the Italian territorial schools and the related young artists who represent them. The call, addressed for now to Lombardia and Campania,  sent back many proposals, exhibited in a virtual exhibition and submitted to a committee of experts formed by: Maila Buglioni, curator and chief editor of the magazine Segnonline, Alessandra Arnò, artist and teacher of Art Media and Creative Advisor, Martina Sconci, professor at the Academy of Fine Arts in L’Aquila and director of the Muspac, Ivan D’Alberto, art historian and director of the YAG/ garage and Silvio Maresca, founder and administrator of the YAG/ garage.

Andrea Strizzi, graduated with honors in both Sculpture and Decoration at the Academy of Brera, since 2014 collaborates with the Civica Jazz in Milan, in a good mixture of the arts that gave rise to some projects, including festivals and exhibitions. In the exhibition he shows the work in three elements Dal Profondo (2019) and one of his audiotactile installations, which highlights the dialogue created between the value of material and sound, in a multiple view both visual and musical. Davide Viggiano with Geografie del Divenire (2021) and Rin-Tracciami (2021) displays a research oriented to the individual and its features, using bioplastics and natural materials such as tissue, which create body stratifications in a dense osmosis between inside/outside.

Miriam Montani with the triptych Corpo Lieve (2019) and the diptych Radicamenti (2019) exalts the concept of instability and becoming, with the ashes of the trees and layers made of petals of flowers, enlighting questions about contemporaneity and its constant transformations. Even Li Jinze, who has Chinese origins but moves to Milan and studies in Brera, in the video-performance ANIMA (2021) slowly ignites ten bouquets of flowers put upside down, which the fire burns inexorably, leaving a dark footprint on the wall, alluding to time and its faster progress. Giuseppe Raffaele personally interprets the human entity and its values, focusing on identity and memories, whithin the use of natural materials such as earth, iron, resins or marble, that are modified by aggressive substances or atmospheric agents. Insularità n.1 (2020) is the placeholder not of a memory but of a sense of visceral belonging, who the individual feels strongly when referred to a place that is strongly rooted inside himself.

Annamaria Natale, graduated in Painting and Visual Arts, presents Orizia (2020) and Senza Titolo (2020), in which is clear the artist’s need to elaborate through an ethereal and light technique the instability of this historical period. Andrea Bolognino declines his own interest in theatre dynamics into two pen on paper from the series Man with A Permanent Mask (2021), in which a broken and open profile (or hidden?), halfway between the diabolical and the mysterious, puts us before a human attitude terribly real, but often invisible. Francesca Rao presents Diversamente fragile, an experimental work from 2021. The artist here uses for the first time the technique of printing on glass, rediscovering it as a material symbol of fragility, sharped boundaries and painful shape, but in a new positive key, which changes the perception of the individual himself.

YAG/garage ITALIA shows how the two schools shared a reflection about the current condition of man, on the one hand through a three-dimensional presence, and also with the choice of a strong material evidence. On the second side, while maintaining a greater lightness, marked by an apparently delicate graphics and minimal sculptures, the artists have actually reached an important depth in reading the tangible. 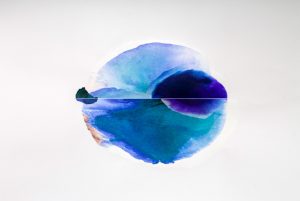 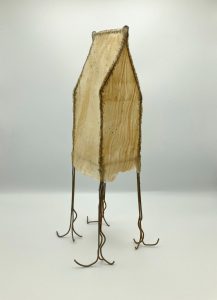 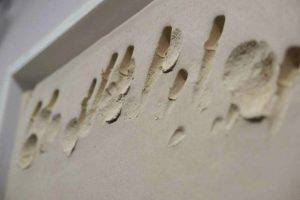