Zahra Hooshyar. Landscapes of the soul

Zahra Hooshyar. Landscapes of the soul

Painting is born from the inexhaustible amazement of the painter who lets herself be enchanted by the world: wonder seeks the essential, is an instant manifestation of being, dissolved by the consequential rhythm of existence. Nature has always been a privileged field of investigation for those who work with color and its representation in contemporary art has long gone out of the canons of realism to embrace a wider field of cues, motifs, and implications. By color, an artist is a demiurge, maker of new forms, molder of other worlds that are not those of reality and in this sense every vision immediately becomes creation.

The Iranian artist, Zahra Hooshyar (1961. Lives and works in the UK) begins with her impressions of nature’s fugitive objects and her observation of the most intangible phenomena, like light, air, reflection, condensation, shadow, to turn them into an inner dien plan in which the sense of vision melts into a variety, plunging into a single imaginary garden. Each painting appears to stem from the magnification and blurring of a meteorological detail or texture that retains an astonishing camouflage with the original while gaining an existential depth that is decoupled from the objective data. The painting is born in it as a deep need for direct contact with nature and translates not into the traditional landscape but a loving glance of life-filled things, into a yearning. Infinity becomes light and color. The painting represents the place where the splendor of nature is welcomed, a space of beauty within which the world animates and finds its concordance, overcoming conflicts, and disharmonies of real life.

Color is understood as the language of the eye that perceives the world and recognizes its suggestive value that stimulates the imagination to enrich a dream and open new horizons to infinity and the unknown. For this reason, painting, while taking its cue from reality, is not a tool of description, but takes on spiritual value, as if the color were what comes before the definitive distinction between subject and object, the original element still in contact with the mythical time of creation, able to unite rather than divide. Painting for Zahra Hooshyar (and as a reflection of her painting) means abandoning oneself to the immense stretch of space, immersing yourself in the birth fluid, trying to reconcile and unite different realities to create a new entity, tenaciously chasing through the colorful, universal singing that has united time and space since its immemorial times.

The diverse and profound spectacle of light, translated into color, instills in the natural reality the sense of the impossible that only painting can recreate within an apparent naturalism and gives visible form to the continual change of things that prevents the instant of crystallization. The artist, therefore, by transforming the splendor she perceives into the paint, has the power to unwind the world from appearances, to illuminate and illuminate the dark. The visible borders of objects do not stand up to this spring force that has come from a primitive time, before creation, and the senses, without distinction and priority, communicate with each other in unison to seek an inner shape or indissoluble born before anything else. If nature as it speaks to the eye never tires of dialog with all of our senses, even painting explores through color that original magma that is not only the ultimate vision but the ultimate evidence of synesthetic properties. Transforming perceived nature into painting, therefore, means finding that distant overwhelming harmony and recreating it on the canvas conveying in color perceptions normally appanage of other senses. In the paintings of Zahra Hooshyar, we, therefore, have a color that smells and resonates, a color able to come into direct contact with the origin, in the primordial instant from which our configuration and nature were born.

The eye pairs with the color of the world, but the perception takes place in the space of the interior, where the invention overlaps with the description through the language, at the same time subjective and universal, of painting. In one of his letters, Paul Gauguin wrote: The color, so ambiguous in the sensations it offers us, can only be employed in an ambiguous way every time it is necessary not to draw but to translate the musical emotions that are freed from its nature, from its mysterious and enigmatic center. The symbol creates by means of wise harmonies. Color in its vibrations captures the most universal, indefinite secret energy that exists in nature.

Zahra Hooshyar’s paintings could be called painting of essences, the triumph of a slow time flowing through things, shapes and unifies them within the veil of silent light. Its total interpenetration with nature shows how reality and its reflection share the same time and inhabit the same space and how the duality between visible and invisible can be recomposed into a pulviscular dissolution of being in infinite particles. Everything we are used to seeing is sprouted in fascinating inflorescences of light in which the instant and the eternal merge. The pictorial surface captures the mysterious jolt of life that manifests itself in the labile, in the indistinct, in the fugitive, reactivating the intensity of the mythical time that preceded us and that still constitutes our active and living essence. 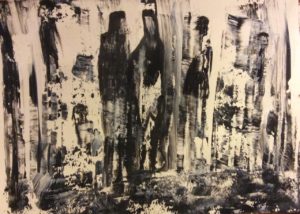 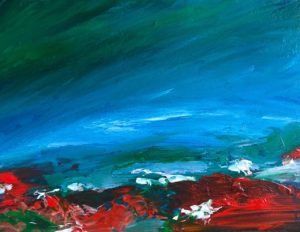 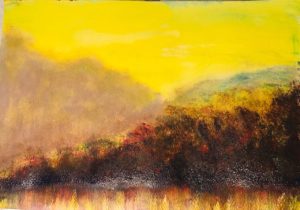 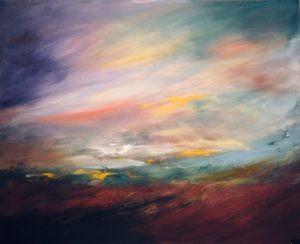