Interview with Andrea Bianconi on the occasion of his Fantastic Planet exhibition at the CAMeC in La Spezia, that will be open until September 30, 2018.

Emanuele Magri: It seems to me that this exhibition, with works from 2011 to today, is basically born from an arrow, in turn born from the design that is the basis of your work, is that it?
Andrea Bianconi: The arrow is a symbol to which I have arrived slowly, it is a kind of inner synthesis, I wanted a symbol of the human condition. The arrow is a line with wings: you have the freedom to make a decision but then you have the obligation to respect it once you have chosen it. So the arrow puts me in a position to represent the human being. We find the arrow everywhere when we breathe, eat, live, feel the beating of the heart, everything has a direction but also the sunrise, the sunset, a leaf that falls, is a universal symbol.

Nothing bellicose?
It is not a weapon! It’s just a direction. One can decide to take a direction and has the freedom and the constraint to follow it.

How is the exhibition structured?
I liked to structure the exhibition as a kind of journey: I decided to call it Fantastic Planet and I took Dante as a guide. The arrow is an idea of journey, of travel. I wanted to take this journey and I want to understand what a paradise, a purgatory and a hell are. And I realized that these three worlds are also included in our moments, that is to say that we live in a moment in hell and the next moment in paradise. I think I’m always in purgatory, I’m always in an intermediate condition with two bands that pull me to the two extremes.

So that’s why the exhibition is conceived with three rooms that follow one another.
We start with hell where there is already a tension towards heaven. It’s a hell of the person. There are mirrors with cages in front of which you can see the relationship with yourself, you see yourself in the mirror in a cage and start a mechanism of doubt.

In the room of Purgatory there are beautiful drawings in which the arrow becomes an umbrella, rain, a series of little men …
Purgatory is a stalemate, it is a moment when you have to look for where the arrow is, in an umbrella, in a landscape, sometimes the arrow we have before our eyes but we do not see it.

And heaven?
In Paradise I wanted to take a wing as a symbol, because in the English word “drawing” there is Wing inside, the wing is the freedom that is inside our gestures.

For you, drawing was a tool for liberation, an instrument of knowledge.
Exactly. Then there is the black room where there is a luminous work. It is the person with herself. I wanted to insert the light in some way and to insert it I had to get it out of the path of the arrows. I could call it a decompression room, the room where the person is with herself, with an oracle.
Then I wanted to put two more things. A black man holding a bunch of arrows like a bunch of flowers is like saying that after all this journey there is the optimistic part of the journey. I called the work the Gift, because what we have to decide is a gift.
Then there’s the suitcase, which I took two days before the inauguration. (The works go from 2011 to today). There was a need for a suitcase for this trip. A baggage in which there are the man made with arrows, glasses, visions, a magic wand, etc.

Going back, let’s talk about your beginnings.
I was born as a performer, I always tried to investigate and study, analyze the relationships between things, between cultures, between people. I started investigating the relationship between me and my wife. We took a song, our wedding dresses, put two cages on our heads and we danced the song of our wedding. All this to see if we really know each other.
Then I wanted to deal with the relationship between cultures. I went to Shangay and I did a demonstration in a country gathering eighty-eight young people to understand how these young people live the Chinese tradition. Then I did the Moscow biennial where I wanted to compare myself with the Power. We were eight people dressed in cages and drum sets in front of the Red Square. When we played green everyone came in and when we played red nobody came in. It was a personification of the traffic light. Then the relationship with the landscape, for a museum outside of New York, in the Hudson Valley, I had done this performance. I was riding a bicycle with a cage behind it, and it was a way of relating to the landscape. In a museum in Oslo, two months ago, I built a huge flow fifteen meters high along the stairs of the Museum, made of ropes and objects and I and a harp player played these strings and these objects to understand what relationship there could be between them.

Recently one of your performance took place in Palermo at the inauguration of Manifesta 12.
In front of a mirror, I put thirty masks on top of each other until I became blind. I had also done this in New York and Huston.

On these works there is the book “Performance 2006-2016” and then ..
And then my last book sponsored by the collector Antonio Coppola, curated by Catherine de Zegher curator of the Moma, with an interview on my work.

The performance you did here at the Camec?
The obsession is whether or not this Fantastic Planet exists. So I wrote a musical score and a text. The musicians of the Conservatory have tried to make the words and the letters that I had written into music and they sang it with the soprano Felicita Brusoni who who interweaved this music with voice sounds to understand if this planet exists or not.

So what would you say if you had to define your research very briefly, from the performance to this exhibition?
I’m a relationship hunter and I use the arrow to get the direction. 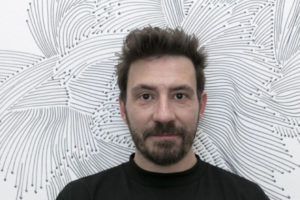 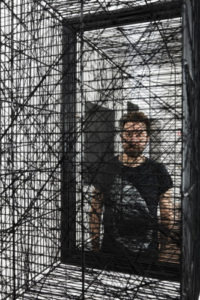 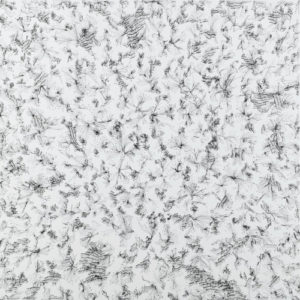 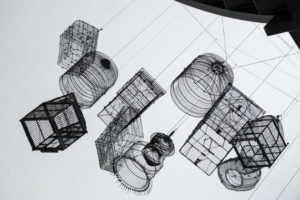 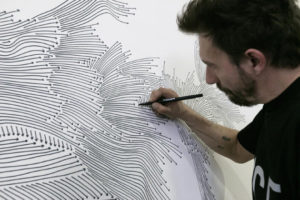