After the success of the solo exhibition by Arcangelo Sassolino, Il vuoto senza misura, which opened on 21 May, the gallery Atipografia (Arzignano, Vicenza) proposes the collective exhibition UNPLUGGED. It is a collection of works by Mats Bergquist, Gregorio Botta, Mirko Baricchi and Mattia Bosco, and will end on 30 October 2022.

The project by Elena Dal Molin involves a comparison between artists marked by different poetics, but with a joint sensitivity that leads them to confront the space and the viewer live: the works are to be touched and caressed like those of Mats Bergquist, appreciable with a close-up look as in the case of the paintings of Mirko Baricchi, or with a body to close as in the case of Mattia Bosco.

UNPLUGGED, which means «pull the plug», says Elena Dal Molin, for a concert refers to the «not amplified» that is to have a more intimate relationship with the instruments. A decision made in 2021 on the desire for “presence”. A photo is a third look, something that takes a lot away from the work. UNPLUGGED becomes a bit of the gallery poster, which requires a body-to-body made of measurements, a comparison with the work, of «entering into the picture» as Rothko said. And also from the geographical point of view, the gallery itself is placed in such a position that you do not pass by, you just have to come, enter, appreciate the space and the work of functional adjustment started on the eve of the pandemic, carried out by the AMAA study: fascinating environments in which to research, exhibit, meet and even live. Presence and physicality: works of art are such if they move, move and sommovimento.

So here is Selva, a canvas by Mirko Baricchi, which, with its dimensions, invites to an immersive contemplation. With almost monochrome shades of green, Baricchi’s landscapes are characterized by a fast succession of brushes, followed by a partial removal of color: a set of pictorial gestures that creates a two-dimensional carpet with sudden three-dimensional presences, punctuations that open to pictorial perspectives and unexpected depths. This work is counterbalanced by Cactus, which seems to be of a completely different type and instead, as the author explains, these are fragments that might seem marginal, but traceable in Selva and vice versa.

The two sculptures by Mattia Bosco (artistic director of the House of Artists in Milan) in black rosewood marble and gold, play on the contrast between the stone shown in all its material being and its energy, its veins, irregularities, and the twists of the prisms perfectly regular, in gold, that fit together to bring light in the night of the rosewood. Their position in the dark part of the gallery makes the golden light of the geometric grafts stand out beautifully.

With the nine icons of Mats Bergquist, entitled Till Lucia, we are brought back to the icons of the Coptic tradition, which re-call the technique of the fourth century AD, which, when touched, and retouched became concave: wooden boards on which is placed a fine linen canvas by means of rabbit glue and through very slow steps, layers of plaster, a working process that recalls the rite of prayer. The smooth surfaces, tactile paintings-sculptures, ask to be touched, caressed, and invite to contemplation and silence. Lucia is the saint of the winter solstice, which in the Nordic countries is felt intensely because it foretells the periods of darkness, when the sense of sight is lowered and that of feeling prevails.

Finally, we find the work of Gregorio Botta. The artist draws with light, with transparency and lightness, creating increasingly rarefied works like Sebastian, in which an arrow pierces a glass: an empty space in which we enter up to the white wall on which grow white flowers. From the wound of the body of the pictorial tradition one enters the impalpable, the irreproducible, the inconsistency of the spirit.
There is also a wound in the Chariot of Ophelia, a work inspired by the famous Ophelia of Millais. From that wound in the lead, from this heavy material, flows pure and transparent water like that of the spring, bringing us back to the transparency of the previous work. As with Muta, we pass from hearing to silence. The Tibetan bell suspended in a water tank refers to its sound only as a sensation. 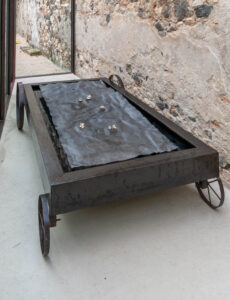 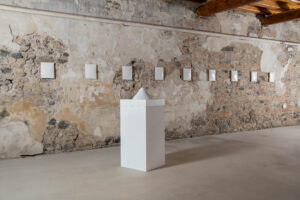 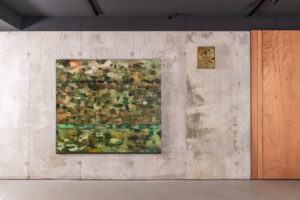