Extension, the new building designed by David Chipperfield Architects, has doubled the space of the Kunsthaus in Zurich, transforming this institution into the largest Swiss art museum. The total cost of this intervention is close to 206 million Swiss francs, of which about half was covered by the contribution of private citizens, while the rest by the city and the canton of Zurich. The new building connects with a seventy meters long underground tunnel to the historic building of the Kunsthaus, built on Heimplatz in 1910 (a bit like in the Jewish Museum in Berlin, access to which is allowed via an underground corridor from the ticket office of the Berlin-Museum). Since then, the Kunsthaus has expanded several times, starting with the project by Karl Moser in 1925, then in 1958 with the exhibition gallery, auditorium and restaurant designed by the Pfister brothers, and finally, in 1976, with a further enlargement signed by Erwin Müller. The Chipperfield Extension allows for 20% of the collections to be exhibited, about double what was possible up to now. The subdivision of the spaces focuses on four macro areas: the exhibition of collections from the 1960s onwards, the Emil Bührle Collection, the space for temporary exhibitions and the central hall designed as a sort of agora for the enjoyment of art.

As a result of this reorganization, the “historical” spaces of the museum will have more rooms dedicated to ancient painting and to the enhancement of Swiss artists, in particular Ferdinand Hodler and Alberto Giacometti. The materials used for the interior of the Extension are concrete, lightly colored oak wood and white marble for the floors. Brass for the decoration of walls, doors, handrails, elevators, signage. The façade, elegantly marked by pillars, is modeled from Jura limestone.

Free access will be the art garden located north of the Chipperfield building. Together with the Zurich Theater, another presence of strong symbolic value in the city, the new urban structure underlines the function of the cultural hub of the Heimplatz, which is also the gateway to the university district.

An important role in the renovation project of this part of the city is played by Tactile Lights, the installation of lights and videos created by Pipilotti Rist in 2016, on the occasion of her exhibition at the Kunsthaus and then remained as a permanent installation on Heimplatz. The centerpiece of the work is an auction designed by the artist who in the evenings of the darkest months of the year, from October to March, projects splashes of color on the facades of the surrounding buildings and on the ground.

Walter De Maria (1935 – 2013) was one of the great interpreters of the so-called American neo-avant-garde. His most famous work is The Lightning Field (1977): after having driven into an area of ​​about three km, in a remote corner of New Mexico, four hundred pointed metal poles, these, acting as lightning rods, multiply their light effects. His work, therefore, is fully inscribed in the current of Land Art, without however forgetting that purist dimension of minimalist sculpture, typical of Carl Andre’s works, and which has also strongly characterized his work.

“The 2000 Sculpture” fully responds to these roots, and is one of the largest sculptures in the world designed for an enclosed and horizontally developing space. The work, in fact, designed for the Kunsthaus Zürich twenty years ago, is now being re-proposed. This exhibition consists of two thousand white plaster bars, each 50 cm long and 11.8 to 12 cm high. The individual parallelepipeds, although in the overall view and from a distance, look all the same, have lateral faces of five, seven or nine sides. They are arranged over an area of ​​five hundred square meters, in a total of twenty rows of one hundred bars, like so many soldiers arranged for inspection. The arrangement follows a specific rhythm: 5–7–9–7–5–5–7–9–7–5. This creates a sort of herringbone pattern and, depending on where visitors are, the bars seem to move towards them or away from them, according to a Gestalt-like perception that plays with light and shadow. 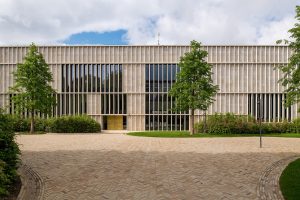 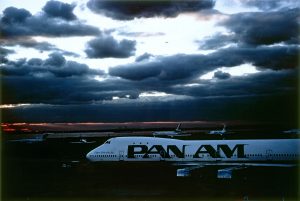 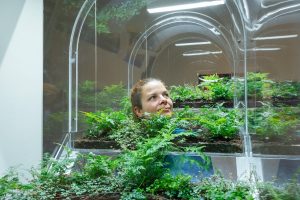 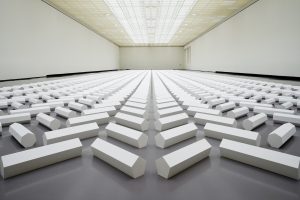