After about fifteen years of projects and worksite, M + has opened in Hong Kong, a new cultural center referring to the visual arts of the twentieth and twenty-first centuries and which aims to act as an engine for the development of the cultural district of West Kowloon. Due to the size of the collections (about eight thousand works), the size of the spaces (65 thousand square meters) and the highly diversified exhibition and educational activity, this museum intends to compete with the largest and most attractive centers of Western culture, such as the Tate Modern, the MoMA and the Center Pompidou. The Museum, administered by WKCDA (West Kowloon Cultural District Authority), is endowed by a highly respected staff and is directed by Suhanya Raffel. The architectural design of this exceptional cultural center is due to the visionary planning of Herzog & de Meuron, who here worked in close collaboration with TFP Farrells and Arup.

Of course, we must take note that it opens its doors at a time when the political situation is not the most optimistic. The former British colony, since 1997 under Chinese sovereignty with the status of Special Administrative Region, has seen its autonomy lose over the years and the street protests that gradually occurred are clear evidence of this. With the introduction of the new law on national security in 2020, the political climate has changed and some fundamental freedoms have been lost. For example, the application of the new legislation dictated by Beijing, rather broad on crimes of secession, subversion, terrorism and collusion with foreign or external forces, could cast a dangerous shadow on the cultural activities of the new museum as well. To put it clearly, the fear is that the museum’s activities, beyond any good intention, may self-censor before having to clash with the political authorities. In fact, Henry Tang, chairman of the board of directors of the West Kowloon Cultural District Authority and former Hong Kong chief secretary from 2007 to 2011, gave a speech in which he cheered at the press conference for the inauguration of the museum due to the fact that the city of Hong Kong now has a world-class museum, but at the same time as the recurring question of possible censorship within M + has emphasized, with great tact and elegance, that no museum can break the laws, including the National Security Act. “Artistic expression is not above the law” he said and added that societies have evolving standards, be they moral or legal, which can make some works of art less acceptable than they were when were produced for the first time. In short, one wonders: could an exhibition be rejected because the author is disliked by political power or because the contents could be considered dangerous?

However, beyond any pessimistic forecast, the Museum opened its doors in a grandiloquent way and with six thematic exhibitions. It acts as a trailblazer “Hong Kong: Here and Beyond” (Main Hall Gallery, until November 27, 2022), a spectacular exhibition that documents the evolution of visual culture in parallel with the transformation of the city from the 1960s to present. Another of the inaugural exhibitions, “Things, Spaces, Interactions” (East Galleries, until May 21, 2023), showcases the design and culture of the visual arts of the Asian world. Then we have to deal with “M + Sigg Collection: From Revolution to Globalization” (Sigg Galleries, until 7 October 2022) which investigates the development of Chinese contemporary art from the 1970s to the 2000s. In some way, this exhibition has its counterpart in “Individuals, Networks, Expressions” (South Galleries, until February 5, 2023), where the developments of post-World War II international art are investigated from an Asian point of view.

Then we find a series of testimonies of conceptual art included in the exhibition “The Dream of the Museum” (Courtyard Galleries, until 18 September 2022), and to finish with a flourish the grandiose installation by Antony Gormley: “Asian Field” (West Gallery, until 3 July 2022), with hundreds of clay sculptures made with the collaboration of about three hundred inhabitants of the village of Huadong (Guangzhou city). This project was born in 2003 and has now been “married” with the installation of about 200 thousand terracotta figurines: a kind of army that is also the variant of previous installations created by the English artist in Australia, North America and South, United Kingdom and Europe. On each of these occasions, the dominant aspect was that of the involvement of local communities and participation in the creation of the final product. This is to say that in all these activities performed outside the studio, the process of dialogue and involvement was more important than the formal detail.

Here, we pause with a brief comment on this author, since he is placed among the greatest representatives of the new English sculpture from the Eighties, together with Tony Cragg. However, beyond the labels and historical contextualizations, Gormley is today acclaimed worldwide for the increasingly different declination of his works and his public installations and because his work intertwines the expressive form of the human body (as a kind of fixed point of the Neo-Renaissance period) with the space that welcomes it, to the point of immersing oneself in nature and seeking cosmic relationships. And it must also be said that in this installation (where the number has its significant and superabundant datum, as in a sort of sacrificial rite) the body, although treated briefly, is not missing from the appeal: a standing body, with two eyes and two arms; in fact the basic elements to give it a sense of primary recognition and connection with archaic stylistic features. 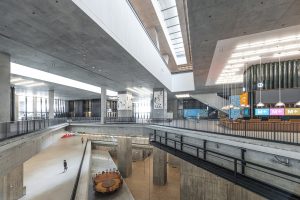 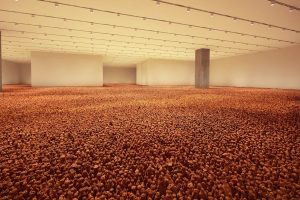 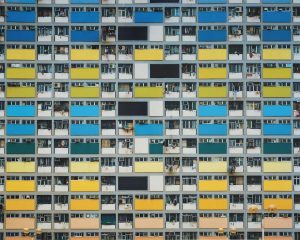