The journey as a cognitive too..

In a half-dark cellar of unfathomable size, Matthew Barney (1967) emerges as a demon from a primordial broth of urine and faeces. He climbs the stairs leading into Norman Mailer‘s house (1923 – 2007), through the room where the wake for the writer’s death begins and enters the bathroom where he is sodomized by an old cadaveric (the pharaoh Usurmare). From the man’s golden penis he spills out of the silvery sperm, who, traveling through the rooms, meets the prosthetic limbs of the actress Almee Mullins. These are the first scenes of the performance film with a considerable duration of almost six hours, with which Arte Fiera di Bologna decided to inaugurate its fortieth edition.

River of fundament (2014) is inspired by the book Norman Mailer’s Ancient Evenings, a novel set in pre-Christian Egypt that tells of the soul in the passages from life to death to rebirth.

Gods and demigods, in the contemporary world of Barney, enrich the human existence of an ancient, almost forgotten sacredness. The symbology is varied and abundant, sumptuous and pornographic and the transition to another life is accompanied by baroque rites between orifices and feces, mechanical carcasses and car emblems. A Chrysler dealership in Los Angeles is the temple where the destruction and rebirth of the body is performed. And in the industrial area of ​​Detroit, on the other hand, the angry Set cuts the car into fourteen parts by dissolving each piece in the furnace.

Death and resurrection follow one another in the eternal slow, perhaps even moving, flow of the putrid river that stagnates in its foundations. In this regenerative placenta the opposites join and the spirits wander in search of the way back.

The musical composition of Jonathan Bepler (1959) plays a primary role. Made of songs, voices, sounds, shots and improvisations, it gives structure to the images concatenating to them as if everything had been conceived for a single score. River of Fundament is a Wagnerian work not by duration, but by the proximity to that Gesamtkunstwerk so coveted by the American artist. Noteworthy detail, Barney has produced eighty-five sculptures for this film and who knows what else, thus increasing the difficulty of cognitive approach necessary to the immediate and total embrace of the project. The technical language has not really evolved particularly, zoom and slow camera turns, panoramic aerial shots are the same as the previous films. But it also breaks down the media habits by subjecting the viewer to an unusual comprehensive effort, bringing him closer to an operatic language and hence to his idea of ​​the sacred. Before this vanishes forever from our existences or while it re-appears in forms sometimes extraneous to the point that we do not recognize it, here the sought-after scenes of River Of Fundament appear as “arias” wrapped in the magnificent representation of an endless epic liturgy. 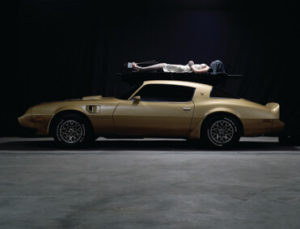 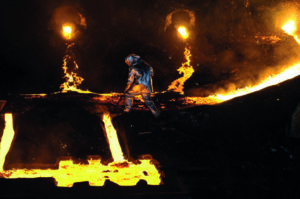