Max Papeschi. Pop humor and digital art in the exh...

Hic Sunt Leones (Here are the lions) is the title of Max Papeschi‘s multimedia event, curated by Gianluca Marziani, currently on display in Rome, with a resounding success in attendance despite the hot summer temperatures. Title that sounds like a notice that refers to the original Latin phrase, which was used in historiography to indicate the unexplored lands of Africa. In this case, however, the Latin expression is a metaphor for reflecting on the Fascist twenty-year period reversed and shaken in artistic, sarcastic and satirical pixels.

Make yourself comfortable because I am not only talking about a singular visionary, known both in Italy and abroad, attracted by the potential of digital composition, passionate about history and power dynamics, but also a professional in the theater, cinema and television world, from whom he inherited a strong narrative scenic vision and a digital awareness with which he landed in the world of contemporary art in 2008. I am talking about Max Papeschi: an artist explorer of pixelated continents still unexplored with references to the elongated, shaken, contemporaneity combined with universal icons in a mix of glacial, bizarre, humorous visions of our times, attracting the attention of an extremely varied audience of non-professionals. In front of his digital creations with the images of contemporary dictators, decomposed and reproposed in an eccentric, bizarre and “papeschian” way, we have fun immediately and then we metabolize a reflection on the sense of history and historical facts.

On the other hand, Pirandello had already talked about the humorous look on the world with the well-known example of the “old woman awkwardly dressed and parade of youth clothes” of which many will laugh but it will be a bitter laugh that has to do with the opposite feeling. So, moved by a pop humor, Papeschi plays and has fun in an exaggerated and deliberately extreme way with the story.

For Hic Sunt Leones, the artist created a site-specific multimedia installation at WEGIL, the famous Trastevere building where GIL (Italian Youth of the Littorio) was born. Here, Papeschi staged a parody of Fascism starring the black shirts and the Duce himself, whose effigies are composed of “original” bodies in a military outfit, but surmounted by the head of Topo Gigio: the one who will save us from evil, in fact. Precisely the iconic figure of Topo Gigio represents the “object” in which many generations will identify themselves, who will go through, perhaps without realizing it, a piece of fascist history to see in this mouse the saving function of our times because in the end we are still surrounded by several black shirts. Not those of the past but those of the present.

It must also be said that mice are now taken on as an emblematic symbol in the artistic world: from Banksy to Papeschi and vice versa because in it there is a dark dimension – given the animal’s propensity to live in hidden places – that artists want to overturn to show from another point of view. Then, the logic of the absurd enters the scene, which has the function of lowering the weight of history in lightness, in the frivolity of the imagination condensed in a mouse, which unconsciously filters the crimes of history together with the hilarity attached to its own character.

And it does not end here because this multimedia installation also consists of a video that reproduces the videoclip of the popular fascist song Faccetta Nera, made with Maurizio Temporin, and five prints – frames of the most iconic and comic moments of the video – made with the digital collage technique, of which Papaeschi is a pioneer at least in Italy and two cut – out figures or the representation of the Duce, upside down. This is the crucial point: you will certainly smile in front of certain unthinkable combinations of Papeschi who plays, for example, with the image of the North Korean dictator, Kim Jong-Un, inserted in iconic artistic contexts – at least in this side of the world – as Botticelli’s Spring or Leonardo’s Last Supper with Trump, creating a paradoxical union between life-death, good-bad, beautiful-ugly, absurd-real.

Papeschi, a keen pixel director, recruits and artistically brings historical and media “objects” of our world to the digital scene, orchestrating a pop and sarcastic humor so as not to forget the story. And if there is Topo Gigio it means that we will save ourselves and there will be the desire to tell the story. Even in a Pop key! 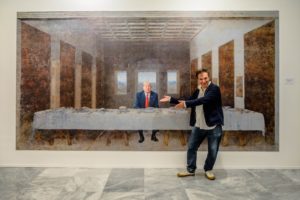 Max Papeschi in front of Verily, verily, I say unto you, that one of you shall betray me, 2018. Ph. Consuelo Fabi 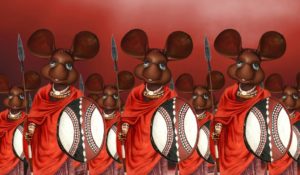 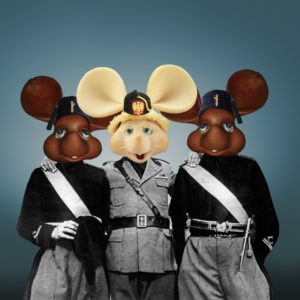 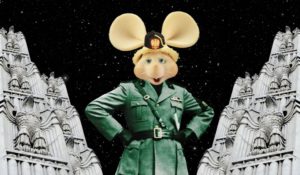