The birth of Postmodern condition in visual arts: ...

The birth of Postmodern condition in visual arts: the thought 1972-1979

Trying to understand the dynamics, the crucial moments and the fundamental reflections of a period of which there is still much to be explored in terms of aesthetics such as the 1980s, is an unavoidable act to better understand the artistic articulation of the present and must necessarily pass through the analysis of those theoretical bases that, from the previous decade, are the conditions for development. In fact, already at the end of the 1970s, the conceptual dialectics had lost incisiveness due to a saturation of their alphabet and a unclear critical definition because, at these dates, under the label of “conceptual” there was a very vast aesthetic territory and very little precise. Furthermore, the ordinary obsolescence of the language was determinated by an incoherent attitude towards the art market, always been considered hostile by conceptual artists who, however, had marketed every possible draft, photograph, newspaper and testimony of their work but, in any case, without reaching the full satisfaction of the art system and its actors. In fact, part of the international success of the so-called Neo-Expressionism, definition which refers to a generalized recovery of the image and of the pictorial exercise, is due to a collecting practice that, in that context, was rediscovering the pleasure of painting, perhaps even on the wave of neoconservative values that the arrival of this chronology brought with it. Just think that after the phenomenon of the Hyppies and the protests, in the United States   spreaded the Reaganism and the vainglorious fashion of the Yuppies, while in Europe, where with the Brigate Rosse and the Baader Mainhof group the political struggle had degenerated into terrorism, overcome the oil crisis and once the civil rights of divorce, abortion and conscientious objection have been obtained, social tension will be diluted in favor of a new perception of widespread prosperity. However, in the intellectual circles spread the awareness that this situation announced a new point of beginning and of artistic exploration that, after the first expressive and then physical reset of the artwork happened in the previous two decades, felt the need to reformulate its skills by questioning itself about its past, its identity, and its nature. As in all moments of transformation, art had come to the point of having to deal with itself.

It is more widely perceived, on the background of the these events, how history is devoid of a predetermined purpose, making collape in this way the prevailing phenomenological thought of Hegelian historical idealism which during the first half of the twentieth century had conveyed the birth and aesthetic intents of the historical avant-gardes, in favor of a re-evaluation of the thought of Friedrich Nietzsche and its historical conception, where the succession of events is no longer the programmed manifestation of the Zeitgeist (spirit of time), but an unmotivated and necessary eternal return of the identical. This principle, in addition, was well suited to the cyclicity with which the history of art throughout the 20th century was moved, always compressed between the inconsistent isthmuses of phases of great experimentation and moments of return to order. This observation finds its validity also within the chronological and disciplinary banks of the three decades that have provided the aesthetic bases and anticipated the arrival of the one in question, where the extraordinary executive and expressive freedom of the Informal art – first true global language of the contemporary art – was first coldly immobilized by Minimalism (that can be defined a modern return to order) that revaluated the importance of the formal and physical qualities of the artistic realization, to then become the object of a process that could be said inverse, or that of dematerialization triggered by the strong experimentation practiced by the conceptual tendencies, to return finally, at the dawn of the temporal segment here considered, to the rediscovery of the painting first, and of the objectivity then. In this way, it was affirming a general vision decidedly disheartened towards man and history, which was also reflected in the reconsideration of the contingentist thought of Émile Boutroux, as well as that of contemporary philosophers. In advance with the times, in fact, were the post-structuralist Gilles Deleuze and the anti-psychiatrist Fèlix Guattari, who with the publication in 1972 of L’Anti Oedipus – the first of the two texts of the corpus Capitalism and Schizophrenia – identified with lucid clarity many of the social and cultural phenomena that were taking shape in that context and that would have been reflected in the ways of propagation of the artistic experience. Terms such as “nomadic thought” and “deterritorialization”, introduced by them, described well the indefinability towards which the human society was orientating itself and how it was deconstructing itself, causing the loss of identities, of the local specificities and  becoming in this way more and more like a “device” – according to Deleuze a system of lines in reciprocal disequilibrium – characterized by a ramification like a “rhizome”, accordingly following a multidirectional horizontality that doesn’t contain hierarchies. This consciousness of the fall of the idols of modernity, with the approach of the 1980s, is nourished by another fundamental contribution to dissolve the most complex aspects of the moment, as was that of Jean Francois Lyotard who, with the publication in 1979 of Postmodern Condition: report on knowledge, inaugurates the decade by defining – precisely – the concept of Postmodernity related to advanced capitalist societies, where, since the 1960s, all typically modernist factors like absolutism, utopism and finalism that – as said – had characterized the creative seasons of the historical avant-garde, to the benefit of a disenchanted and relativistic reinterpretation of the history of art, releasing it so from any purpose and belonging. To this is added the “Weak thought” theorized in the same years by the epistemologist Gianni Vattimo together with Pier Aldo Rovatti, who, having noted the fall of the idea of centrality in history and in human communities, argues the rise and proliferation of localisms and particularisms until that moment overpowereed by the monolithic nature of a single and leading thought, which did not include the exception represented by diversity within it. Thus, we pass from a vision of univocal monochordic integrity dictated by a homologating thouht, to a polyphonic, segmented and polysemic one.

In correspondence with this events, in the international artistic context, in the Italian one and also in the field of militant criticism, there is a fragmentation of aesthetic conjugations, caused by an eclectic and versatile linguistic attitude in deliberately drawing, thus generating the phenomenon of Citationism, to the visual syntaxes of the past – recent or not – without taking much care of their historical-cultural relevancy. In concordance with the practice of the Different repetition always conceived by Deleuze, the various artistic legacies are treated in a decidedly nonchalant manner, as pieces whose combinations do not necessarily have to be provided with narrative or philological coherence. In opposite direction to modernity, that on the echo of dictates like “the ornament is a crime” and “less is more” by the architects Adolf Loos and Ludwig Mies Van Der Rohe, had founded his speculation on the importance of rationality and methodological relevancy, that which arises from its crisis and from the end of its references, is characterized by the desire to differently revalue its linguistic capacities, so it’s not possible to have only one aesthetic solution, but it seems necessary to experiment them in the most varied and risky applications, because style and artistic result are selfjustified. Consequently, in front of the continuous fusion between high register and low register, just as Lyotard argued, it seems that “everything can be read in every way” and, remembering the motto of another architect, Bob Venturi, we come to the awareness that “Less is boring”. Even more interesting and effective from a disciplinary and strictly historical-artistic point of view, through the reconstruction of an itinerary of exhibitions and moments of critical elaboration, it will be to see how creative eclecticism deriving from a such varied and pluralizing thought is mirrored in the diffusion modes and in the contents of the relativeartistic experience. 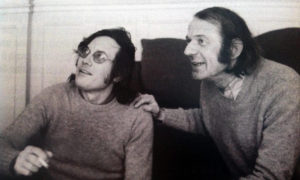 Gilles Deleuze and Fèlix Guattari in the 70’s 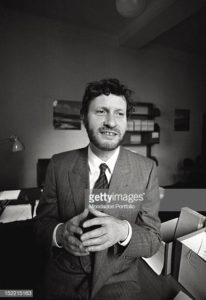 The philosopher from Turin Giovanni Vattimo is smiling in his studio. Turin, 1980. (Photo by Adriano Alecchi/Mondadori Portfolio via Getty Images) 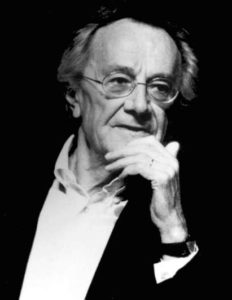 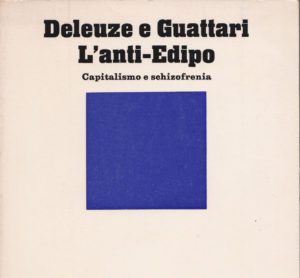