Not to miss GERMANO CELANT

The studio for an artist is the fundamental place, the cave from which his creation originates, the maternal utero to which he returns and from which he is reborn. High, low, old or new, shared or solitary studies. The studio is the mirror of the artist, a place that can tell us something more about his work.

According to Daniel Buren, it is in the studio that works of art should be seen, and not in a museum or a gallery, which, not being designed to host a work of art in particular, neutralize and distort each work. Only within the studio the artist is allowed to be himself and dirt to prevail over cleanliness, and to chaos to shape matter.

Among contemporary artists, Lucas Samaras was the first to exhibit his studio in public, transferring it entirely from New Jersey to rebuild it inside the Green Gallery in New York. The work, entitled Room # 1, dates back to 1964 and shows, as frozen, the place that has been his bedroom and studio for 14 years. In this small 6 x 13 feet room (less than 2 meters x 4) there are paintings, sculptures, personal objects, his bed, his clothes, his books, sketches and personal reflections. For Samaras, the work is configured as a sort of huge sculpture, an autobiographical collage that contains the essence of the artist, his present and his past. On sale for $ 17,000, Room # 1 remained unsold, but marked a capital moment in the history of art.

Samaras’ act fits fully into the reflection on space that began in the late 1950s, early 1960s. Within a few years, art has gone from creating an “invisible unicum”, as Yves Klein defines the performance / event Le vide brought to the Galerie Iris Clert in Paris in 1958, to Le plein by Arman, exhibited in 1960 in the same gallery. A few years later the installations by Dan Flavin, Andy Warhol and Carl Andre carry on the consequences of the reflections on the exhibition space born with Duchamp in 1938 with 1200 sacs de charbon and Sixteen Miles of Strings in 1942.

Other precedents of Samaras’ act are Merzbau, the inhabited studios of Schwitters, the first of which was completed, or better abandoned, in 1937, and Bed by Rauschenberg, the 1955 combine painting exhibited vertically on a wall of the Charles Egan Gallery in New York.

In the Samaras studio exhibition, the reflection on the space started in those years focuses on a particular place, the one inhabited by the artist, which is made to coincide here with the exhibition space. Samaras will declare that he has made with Room # 1 the most personal gesture that an artist can make, which shows the totality of the artist in the most complete way. In Samaras’ room / studio, in fact, it is possible to find everything that has given shape to the artist along with what he experiences daily. A portrait of the artist without the artist, a trace of his passage, of his way of changing things and environments. A portrait of his presence in his absence, the presentation of private elements in a public place. Samaras’s messy room refuses to consider any object contained in it private, first of all his bed, which will be followed by other beds in art history, from the unmade one by Felix Gonzales-Torres to the devastated one by Tracy Emin, up to the sofas by Franz West.

Just in those same years, between 1967 and 68, Lowell Nesbitt visited the studios of his artist friends, including Claes Oldenburg and Louise Nevelson, to represent them in photos and subsequently on canvas, convinced that ateliers were “portraits of the artists in to which there were neither faces nor bodies. ” Spaces that open inside, very personal, which normally cannot be accessed. Curiously, the very fact of depicting a too personal place, far from the historical-allegorical representation of the painting then in vogue, caused Courbet the exclusion from the Universal Exhibition of Paris of 1855 of the painting that represents his atelier, an exclusion that has given origin, as is known, to the opening by the painter of Pavilion of Realism. And Samaras’ gesture also has to do with reality, presented without embellishments and brought directly to the field as a large object trouvé, together with the denial of the gallery’s clean and neutral space as a white cube.

In Samaras’ work there is a fusion between art and life, that is represented without veils. Almost all his artistic career is introspective, autobiographical and self-referential: from the first self-portraits painted, to the polaroids, to Photo-Transformations of the Seventies, the presence of the artist is the leit motif of his work, which makes us enter his studio- bedroom as much as in his small kitchen with a checkered floor, and which makes Room # 1 a self-portrait of Samaras of those years. 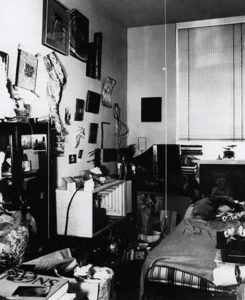 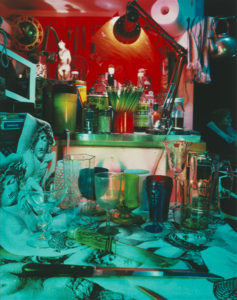 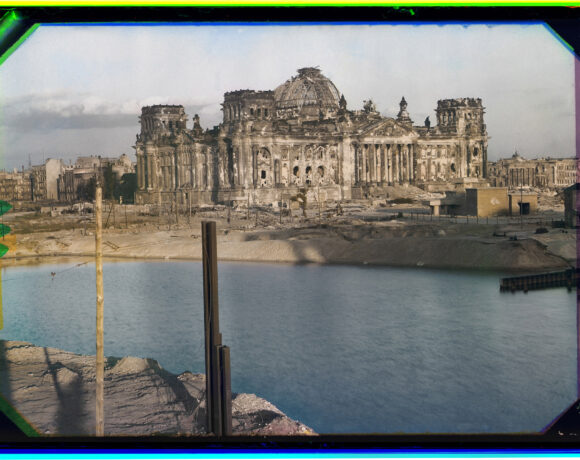