A Symposium for Time is Out of..

Although the title of the title may suggest it, the last solo exhibition by Alfredo Pirri at the Florentine gallery Eduardo Secci is not an exhibition tacked on contrasts, rather focused on limits: Day / Night is avowedly poetic with many pictorial suggestions evoked more or less intentionally according to the Nerudian principle that “poetry doesn’t belong to the writer”. However it investigates the often imperceptible connection between art and more rigorous systems such as optics and architecture.

Starting with the first room with the installation-lamp Studio-per-Imbrunire (someone will remember a well-known painting by Giacomo Balla), the chromatic impression becomes more and more evident and clear by exploiting the excellent diffused sunlight of the gallery, an invitation to repeat the visit on several occasions to prove how time fades the colors, shattering, with slow curvature, on the transparencies of plexiglass in Studio per Compagni e Angeli, a markedly architectural site-specific work which stimulate an experiential and not merely visual fruition . The allusion to the luminous dust combined with the fresh lightness of the feathers creates a sensory contrast between the actual perception and the promptly offered meditative invitation, given the strong poetic accent already discussed, a temporal and existential friction: it is four o’clock in the morning or four o’clock at night? Pirri leaves us the pleasant doubt.

The optical and metalinguistic games chase each other further in the room dedicated to the most paroxysmal works: the recent production of the Arie series, almost unpublished in the use of chalcographic black chasm, cancels out the grace so far found in favor of an enveloping shadowy dimension, an undergrowth anyway refreshing and familiar, as of (congenial term) Mediterranean scrub.

Taking up the initial concept, the border investigated between painting and architecture deserves a brief study; recalling how Jannis Kounellis liked to call himself “painter” (Pirri himself writes it in an article in 2013 for the magazine L’Espresso) transcending a more physical and full-bodied sense (“the meat” he called it) of this traditional technique, so also for the artist from Cosenza, painting spreading in space takes on architectural features. It is not a simple dialectic, there is no intertwined relationship as in the modern fresco (which, among other things, the gallery enjoys a pleasant example of the early twentieth century), but a true transubstantiation because the works coincide with their new nature when they are exposed. This highly mystical reflection serves as a twilight counterpart precisely with the more evanescent and pindaric atmosphere of the other side of the exhibition: only by their fusion can beauty, not equilibrium, be born, since the operation is characterized by continuous dynamic relationships, never defined, often even powerful and incisive. “The sun slips beyond the dunes to rape other nights,” the poet wrote.

Thus, a state of limbo pervades, an artificial purgatory that is precise both in analytical reading and in technical reading, perhaps alluding to the world of chalcographic engraving, the land of none of the visual arts, marked in the numerous traces, footprints and releases of the various works presented (even the watercolors 33 giri have an idea of ​​”press”) and peculiar in its ritual, circular and meditative process as Day / Night is, and always will be. 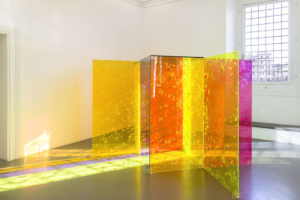 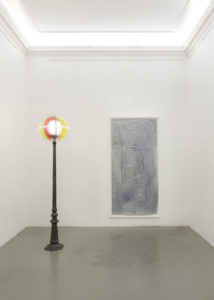