Between Order and Chaos: the P..

The solo show “Beautiful Lies” by Ali Banisadr (1976, Teheran) in Florence is part of the project known as Museo Novecento OFF, presenting a great event for international contemporary art world outside of the museum spaces. The exhibition, curated by director Sergio Risaliti and organized by MUS.E, is on view until August 29, 2021 and takes place in two symbolic and historical locations as the Palazzo Vecchio and the Museo Stefano Bardini.

Banisadr’s artworks are shown for the first time in an Italian state museum and in Florence, in dialogue with art and history of this prestigious city. At the Museo Bardini, where the renown Stefano Bardini’s collection made up of marbles, medieval and renaissance paintings, weapons and Persian rugs is preserved, the artist presents 20 paintings in connection with all these elements and iconic “blue” of the architecture. At Palazzo Vecchio, Banisadr presents a trilogy of canvases inspired by Dante’s Inferno, part of the commemorative events marking the 700th anniversary of the death of the “Sommo Poeta”.

Art practice and personal experience coalesce in Ali Banisadr, since he moved from Iran to Turkey with his family as a child, arriving in the United States. He settles and studies in New York, where he still lives and works. Ali has been an artist for his whole life, as his mother recalled him about his drawings produced during childhood while Iran – Iraq war took place. Bombardments, sounds and consequences of the conflict echoed in his memory through the years and emerges in his artworks and poetics based upon unconscious and synesthesia.

As a result of a life lived both in an inner and a collective way, his “worldscapes”, where figuration and abstract meet and balance each other, spread a rhythmic energy of intertwined sounds and colors. The creation of a restless motion and metamorphosis does not allow any focal point or hierarchy to emerge in his composition, instead produces a structural complexity and a multiplicity of figures that overlap and blend until fulfilling a harmony typical of orchestras.

There is no sketches or preconceived idea in his process, that is a very visceral one, he never knows where the paintings want to go but follow through with them while working in his studio or during daily activities. At the beginning, there are large brushstrokes and more body movement, a gestural phase similar to a performance to create the larger effects. A second time consists of working like a miniaturist, focusing on the details. His work always walks a fine line between the Micro and the Macro.

The exhibition’s title “Beautiful Lies”, as one of the artworks shown at Palazzo Vecchio in front of Giuditta and Oloferne by Donatello, is also an expression used by Dante while describing his literature and all allegorical poems in general and really apt to define Ali Banisadr’s art. His “pandemonium” representations remind us of the allegorical structure in Dante’s Divine Comedy, with myriads of characters, events and images connected to multiple significance levels.

Driving Banisadr’s research and inspiration come from an encyclopedic knowledge of art history, literature, poetry, and philosophy, which affects contemporary reality. His relationship with Iranian or Homeric epic poems, his interest for miniatures, renaissance art and painters as Bosch e Bruegel; together with an aware role in current society, with its own contradictions, all bounded with dream and meditation worlds, produce a “polyphonic” art language essential to our contemporary era.

The exhibition “Beautiful Lies” is rooted to a millenary tradition, actualized to an analog and digital universe where we live. Visitors walking across these ancient rooms, could isolate themselves from such a peculiar scenario thanks to the immersive art presented, capable of represent them both as individuals and as part of a collective and social group. 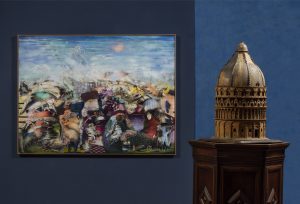 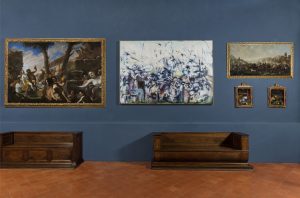 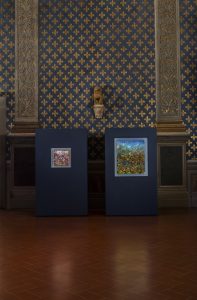 Graduated in Foreign languages, literatures and European artist cultures, she worked as a visitor assistant in some prestigious art museums and institutions in London, UK. Once back to Italy, Caterina obtained a Master degree in Contemporary Art Markets from NABA, Milan, while starting collaborations with contemporary art galleries with roles as gallery assistant and exhibitions coordinator. She writes for art magazines and has recently started to work as independent curator, after attending a course in curatorial practices at the School for Curatorial Studies, Venice.