An initial hermaphroditism. Surrogates at the Prad...

An initial hermaphroditism. Surrogates at the Prada Observatory.

At the Prada Observatory, in the Galleria Vittorio Emanuele II in Milan, the exhibition Surrogates. An ideal love, curated by Melissia Harris, editor-at-large of Aperture Foundation, presents forty-two photographic works by the American Jamie Diamond and Elena Dorfman. Both projects, which occupy the two floors of the observatory, reflect upon the concept of surrogate, associating it with eroticism and motherhood; these two themes are peculiar to contemporary art, for their scabrous and polysemic index, and for this reason never as complex if one wanted to give it back, considering the risks of a sugary rhetoric.

Extraordinary in this sense, for having supported with complexity and scientific authority the new models of femininity from 1900 onwards, the Milanese exhibition La Grande Madre, curated in 2015 by Massimiliano Gioni, who materialized Harald Szeemann’s intentions / obsessions, where maternity and eroticism shook hands in configuring themselves as an earthquake with the intention of demolishing the millennial building of the patriarchy.
Not really so when you want to go back to consider the photographic series that the exhibition at the Observatory offers us.

On the first floor, two subjects are underlined: on one hand the baby dolls by Jamie Diamond, actually disturbing if only for the visual grandeur of the chromogenic prints, on the other the mannequin dolls, cut to half-length and with highly erotic expressions, by Elena Dorfman. But with regard to complexity, already at this point of the exhibition you could have the impression, not without annoyance, of having been catapulted, perhaps unintentionally, into a world that, however proscribed, wants to be forcibly declined in the feminine, without however any “real” woman is still openly presented to us. A femininity that for now is embodied in traditional attributions and artificial outposts.
First impressions are confirmed when you go up to the second floor. We are faced with an almost narrative development of both projects.

Still lovers, created by Dorfman between 2001 and 2005, focused on people – men and women – who decided to share their life with their dolls-dummy, full of imperfections, perhaps in an attempt to make more of the realistic or, on the contrary, grotesque intent (and think of the foreground of swollen ankles, one would say monstrous, of one of these) and Forever Mothers (2012-2018), as well as Jamie Diamond’s Nine Months of Reborning (2014). In these cases, the artist follows the life of the American Reborners community, of which she herself will become part (I Promise to be a Good Mother), women who make realize, even at a high price (about $ 15,000 per surrogate ) hyper-realistic dolls with which they interact to fulfill the desire for motherhood, even in the case of grown children who have abandoned the family nest.

The very few adult male figures turn out to be pleonastic and of course we don’t find ourselves in front of the very subtle game put in place by the hysterical bodies of Cindy Sherman, who dissolves the traditional boundaries of sexual genres while using artificial prostheses associating them to motherhood. It seems that, in this case, the image of the woman is complicated in a sort of initial hermaphroditism, being creaturely with almost theological-kabbalistic implications, such as to make me recall the photograph of the sleeping Hermaphrodite by Mariella Bettineschi, shown by recent at the Miart by the London gallery Richard Saltoun; certainly, the latter, beautiful in its icy sensuality that offered contemplation in an asphyxiated environment, with no possibility of movement, and with almost sadistic connotations. In the case of Surrogates, it seems, instead, that both photographic series are actually resolved in a documentary approach, without however respecting the golden rule of participant observation. 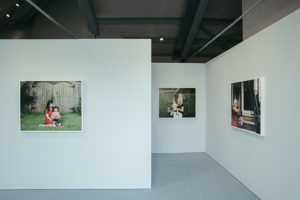 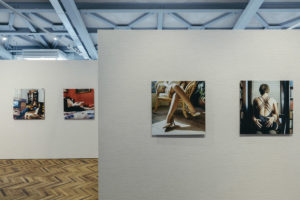 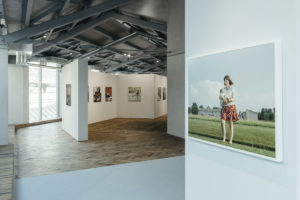 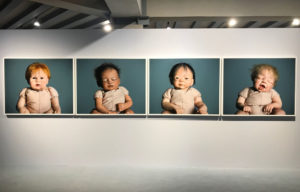