At the P420 gallery in Bologna the exhibition Shape, color, taste, sound and smell curated by Cecilia Canziani is conceived as a juxtaposition of two independent monographs with the same title, one dedicated to a body of works by the Belgian Guy Mees (Mecheln, 1935 – Antwerp, 2003), the other focused on the recent production of the Italian Adelaide Cioni (Bologna, 1976). The double show, which is emblematic of the gallery’s constant commitment to enhancing and rediscovering international masters of the recent past not yet adequately known in Italy, while supporting the search for young ones engaged in re-reading traditional media in a contemporary key, highlights how the creative results of artists which are so much different by generation, geographical origin and intent may be similar.

Both Mess and Cioni appear as painters in a heterodox way: both use the typical supports of this discipline, respectively the canvas and the paper, to free them from their auxiliary function and transform them into body and essence; both extremely sensitive in detecting and combining refined chromatic ranges that are not at all obvious, they neutralize the unrepeatability of the pictorial gesture in a surgical choice of colored surfaces on which to intervene in a sculptural sense, cutting, overlapping, folding and gluing. As can be guessed from these first clues, the two artists are united by a conception of painting understood as pure presence of color in relation to the exhibition space and the physicality of the viewer. Through simple but extremely precise forms (indifferently abstract or taken from reality) painting, released from the support, meaning and narration, explores its own possibilities of autonomy, specifying itself as matter and object. With the complicity of the vast and immaculate space of the gallery, the shapes created by the two artists expand themselves into the environment to reveal an architectural and totalizing ambition that almost defiantly challenges the vertigo and horror vacui despite an equally ostentatious constitutive fragility. The pieces of color that the two artists suspend on the walls, ephemeral and monumental at the same time, combine their unassailable evidence as almost aseptic facts with a pervasive essence that reaches the viewer through the delicate intermediate region where the consciousness passes into the unconscious.

The title of the exhibition was taken from a script by the theater director Wim Meuwissen, reworked in several hands, in which Mees recognized the essential traits of his poetry as if it were a sort of manifesto. It underlines that painting is an adamantine and self-sufficient entity, but it can express its existence only in the sensory perceptions of those who approach it. Seductive and rejecting precisely because of this basic oxymoron, it lives in a condition of perpetual transition between the real and the imaginary, between illusion and irrefutability, between emotion and rationality. The works of the two artists are cleverly designed to resist any misleading process of interpretation. They act as a bridge between the objective and measurable space that the artworks and visitors occupy with their physical bulk and the luminous and immaterial realm where the colors live as archetypal forms not yet made static by individuation and our most instinctive mental projections.

The first room of the exhibition includes recent works by Adelaide Cioni made of wool, flannel, fabric and acrylic on paper belonging to the Go Easy on Me series begun in 2017 and Secondary Images (2019). In the first, the artist cuts and sews slightly furry fabric shapes onto the canvas to suggest stylized and two-dimensional images of magnified and provocatively naive ice creams. These objects, inexplicably bewitching in their simplicity and ironically contradictory in evoking the summer through materials that protect from the cold, are extremely indicative of how Cioni considers the color a material (or rather a thing, as the critical text by Cecilia Canziani specifies) and the images as infinite variations of a catalog of forms identified by chromatic passages delimited by a gesture that in her case is more sculptural than pictorial. In Secondary Images the reduction to a minimum of the referent becomes even more radical: in this series the artist presents no longer forms but extremely minimal patterns, such as a circle, a chessboard or a series of scaled ovals. Also made with the same technique that seems to declare any authorial specificity superfluous, they demonstrate how the iconic simplicity of Cioni’s language contains a very refined thought capable of reconciling ancient chromatic subtleties with an upright conceptual approach.

The second room of the exhibition is dedicated to the Verloren Ruimte series (Lost Space) which Guy Mees created between in the second half of the Eighties and the Nineties: like Adelaide Cioni, the Belgian master also experienced painting using cut-outs of already colored surfaces – in his case tissue paper, acetate and lace sheets – which were installed directly on the wall. In these works, the search for the essential materializes into a perfect coincidence of form, color and content that together form an essential entity. The arrangement in space of a few calibrated color hints leads the viewer to feel surrounded by a painting that mysteriously acquires intensity as it gets thinner and sparse. With the natural grace of a dance (not by chance Mees had titled Imaginair Ballet the most articulated composition on display in this exhibition) the very thin strips of paper that touch the wall draw their own ray of action, galvanizing the space around it. Somehow heirs of the visionary purity of the theatrical costumes of the historical avant-gardes but devoid of ideological and functional obstructions, these fragments of backgrounds cut through the void identifying its unsuspected interstices and inviting the viewer’s gaze and mind to penetrate them to make themselves color and shape. Mees’s research, aimed at tracing the minimal and indivisible unity of the pictorial language to explore its endless combinatorial variations, manages to combine a conceptually rigorous experimentation with a natural propensity for lightness that makes his works engaging beyond any attempt at critical reflection. 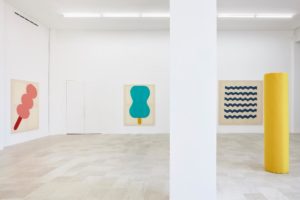 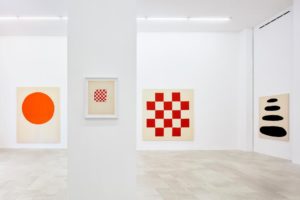 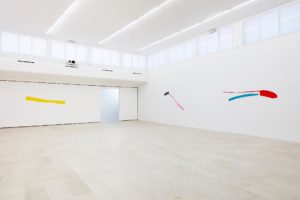 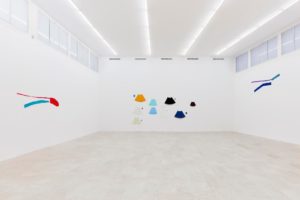 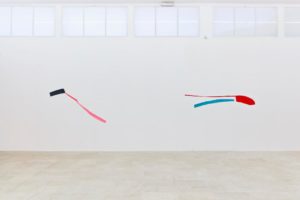