Àccents on Marino Marini Museum in Florence: read and write the story and the future of culture

ÀCCENTS, ACCÈNTI, ÀКЦЕНТЫ is the program of the 2019 Visiting Director of the Florentine Museum, Dimitri Ozerkov, head of the Contemporary Art Department of the State Hermitage Museum in St. Petersburg, which placed the Accents on the different strengths of the Marino Marini Museum. The result is a real contamination between place and thought.

To read
Is this a church, or a house?
Once it was a church,
now it’s a home
where someone meets someone.
Children, women, men,
and maybe horses,
and maybe Marino,
indeed Marino Marini,
who carved these statues
and painted these paintings.
If there is Marino, is there the sea?
The sea of water is not,
but the sea of thought.
This is a church and also a house,
where someone meets someone,
man and woman, little girl and child,
and there are also, Marino,
and my horses and riders,
in the sea of your thoughts.
(from Figure con parole, R. Piumini and H. Ashizawa)

“First the works arrived, then the Museum was built,” says the President of the Marino Marini Museum in Florence, Patrizia Asproni, where, going up the circuit of stairs that overlook the modern nave, you immediately notice the unique result of a bond very strong between architecture and museum.
The expressive and often meager sculptures and figures of the twentieth century by Marino Marini, so serious and fantastic, among knights and thinkers, warriors, dancers and jugglers, boxers and pomonos, bathers and swimmers, can thus be contemplated from different positions, totally changing the classic frontal observation point. A man on horseback, observed from above, is as if he were first to perceive the strategy of combat.

The Marino Museum of Florence thus has a sort of observatory within itself, from which we understand how it is made. A self-reflective museum, to play a bit with environmental psychology, where contemplation is not practiced from an external point but is part of the museum itself.
In fact, this “belvedere” makes the story protagonists not only the works but also the architecture of the Museum and with it all its past, revealing the stratifications of this place, as history has laid them.

Inside this museum is the magnificent Rucellai chapel by Leon Battista Alberti, tomb of Giovanni Rucellai, whose devotional qualities, still evidently shining today, mean that in these days the place, once consecrated, leaves a time of the Church of San Pancrazio today deconsecrated, it will resume spiritual activity with the Sunday Masses. San Pancrazio, already witness of Charlemagne, was also a monastery for Benedictine nuns. A place with sacred roots, literally and for interpretation, the one on which the Marino Marini Museum wanted to weave its own.

To write
Peter’s creature I love you,
I love your severe and harmonious appearance,
the majestic course of the Neva,
the granite of its shores,
the cast iron embroidery of the gates,
the pale twilight and the splendor without moon
of your melancholy nights
when I write in my room,
I read without a lamp
and the sleeping piers are clear,
the deserted streets, the spire
of the luminous Admiralty,
and a dawn quickly changes
to the other, taking away
from the golden sky the night darkness,
leaving only half an hour at night.
(from The Bronze Horseman, A.S. Pushkin)

The spiritual act continues, marking this year the introduction of a new and unique figure, conceived by the Florentine Museum, the Visiting Director, who, in a sort of contamination with the place, creates an annual artistic program. The First Visiting Director in the history of contemporary art starts from the Marino Marini Museum, which hosts Dimitri Ozerkov of the Hermitage in St. Petersburg, curator in recent years of several important Italian events on contemporary art, from the Venice Biennale to the Centennial of Vittorio Veneto until the Futuruins exhibition just ended at Palazzo Fortuny.

Dimitri Ozerkov, after having visited and discovered the greatness of the Marino Marini Museum, thus invents an artistic program based on a smart metaphor. As the accents allow a poetic reading in which some words take on greater importance, the same accents can be placed in special places allowing to read immediately its peculiarities. Born Accents, Accenti, Акценты the project of events that will characterize the Marino Marini for this year. An exclusive and international project that wants, among other things, to relate Florence to St. Petersburg. An artistic residence, of three well-known Russian contemporary artists, a conceptual exhibition at the Rucellai Chapel and an extraordinary White Night (#nottebianca24) that brought critics, artists, poets, musicians and international performers to the Marino Marini Museum for one night.

The bronze knights are no longer only those of Marino Marini but, metaphorically, the three Russian artists called by Ozerkov to work in Florence, Irina Drozd, Andrey Kuzkin and Ivan Plusch, for a staging of the artistic process rather than the display of the result.
The Museum, residence of the artists for almost a month, shows today the fruit of the intense relationship that has been created between the works of Marino Marini and the museum itself and the projects of the three Russians.

Irina Drozd, thinking back to the destination of the monastery that was in the past the Museum, thus works on three graphic works that highlight the issue of violence and sexual harassment in the abbeys and churches, giving them the name of Code of silence. Three female figures drawn on canvas hung with clothespins thus relate to Marino Marini’s statues of women, in a chromatic result that sadly recalls blood, not to portray guilt but to shed light through the speech that creates the art.

Andrey Kuzkin enters and leaves the museum continuously, sees the difference in understanding life between Italy and Russia. Russians live with the weight of the thought that anything can be destroyed at any moment. Thus it was born, Standing at the border of doubts, reflection on the artist’s work and performance on death, which prefers to be a vegetable and planted himself with the head underground, along a bank of the Arno river. He then transcribes on the museum floor and on his skin all the diseases for which the body can perish. And yet the shroud of himself, in a mirrored giantography in which Kuzkin is passed over by the public. And finally the sensational statues of bread, placed in eloquent comparison with those of Marini. Christian bread and a symbol of survival once again gives life to this series of unarmed bodies, in which seeds and hopes can be seen, those of Russian prisoners who created forbidden objects with bread like pearls and nuts.

Ivan Plusch continues his journey in Florence with a work to which he gives the title of Nine circles of life, passing along the spaces of the museum a long red carpet which is unknown where it starts and it is not clear where it ends. A metaphor here, too, of existence and its precariousness, which leaves room only for the action of the present, for the passage. Along with the red corridor, randomly appear infantile red balls, a split DNA to be recomposed, which creates new landmarks in the museum, like the three canvases of the artist himself, where Marino Marini’s paintings are reinterpreted through a technique that insists on the possibility of the works to create new perceptive modalities, separated from a recognizable figure or face.

Alongside the works of the three contemporary artists, Dimitri Ozerkov creates in the Rucellai Chapel, once also part of the monastic complex, a conceptual exhibition dedicated to the theme of women. Here the women represented in three original eighteenth-century engravings inspired by known works of art history three biblical figures remembered as saviors rather than for a commonly violent act, heroines of the same human history: Giaele, Giuditta and Dalila.
However, the three women are also a more modern reference, that of the Three women of the great Austrian writer Robert Musil. Three stories that depict unforgettable portraits of women caught in the inner magma of their feelings or, to put it in Musil himself words, in the “slippery logic of the soul”, the same logic that led the three biblical women to act for the love of the Jewish people. 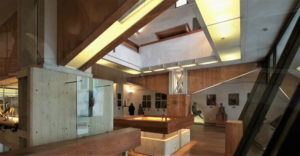 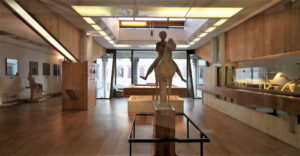 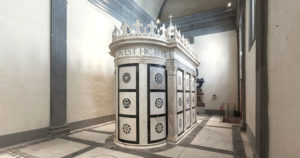 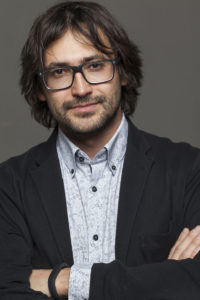 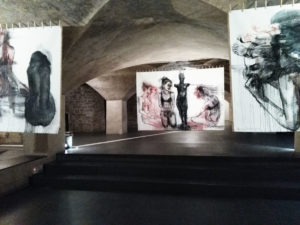 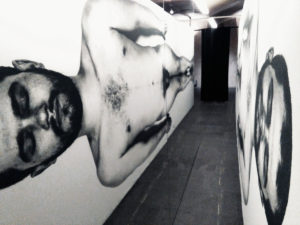 Andrey Kuzkin, Standing on the edge of doubt 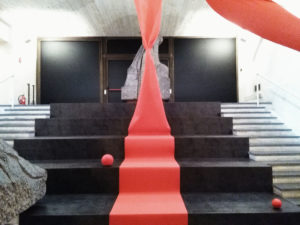 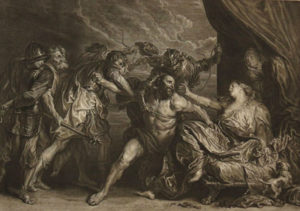 Sansone and Dalila by A. van Dyck