Lygia Pape. Between nature and..

Our exploration of contemporary Iranian painting continues; whose facets are not yet adequately known in western artistic circuits, with an in-depth study dedicated to Mehrangiz Imanpour (Tehran, 1963), an artist with a career of over thirty years and protagonist of several exhibitions in Iran, United Arab Emirates and Sweden, winner of the second prize in the mixed media section of the All Color – CAGO Contest last year in Maryland, United States. Her paintings focus on social issues, such as the condition of women, environmental problems, war and consumerism and use cryptic signs and symbols to invite the viewers to actively participate in the interpretation of the images by completing the concept and meaning with their own personal experiences.

Each painting is conceived as if it were a heraldic sign: on a neutral or conceptual background (which sometimes recalls the texture of desert sand, arid land, the sea or concrete road pavements) iconic trompe-l’œil elements stand out and depict everyday objects, archaeological finds or fragments of the human body detached from their usual context. Their apparently incongruous juxtaposition generates a sort of mental puzzle whose solution does not produce certainties but the multiplication of doubt, which passes without interruption from the interpretation of the image to the sinking in the deepest folds of the unconscious. With regard to these elements, which would perhaps be more appropriate to define outcrops, we could mention the famous phrase of the poet Isidore Ducasse (1846-1870), better known under the pseudonym of Comte de Lautréamont: As beautiful as the re-tractability of the claws of birds of prey; or again, such as the uncertainty of muscular movements in the folds of the soft parts of the pos erior cervical region; and above all, beautiful as the chance meeting on a dissection table of a sewing machine and an umbrella. The Surrealist historical avant-garde brought out the unconscious of the human soul, usually masked by the hypocrisy of the bourgeois society of the time, transforming at first sight the illogical perceptions arising from dreams or certain obsessive automatism into the syntax of a new visual alphabet destined to revolutionize the history of painting forever.

Mehrangiz Imanpour’s work also derives from the dismemberment of visual and mental logics that reflect the acceptability of the standards of behavior on which coexistence is based in every organized society to bring out the disturbing implication of the collective unconscious with its crooked but viscerally coherent connected to the most sincere impulses of the human being. The extremely calculated layout of her paintings; real traps for the thought from which it is impossible to escape unscathed, therefore hides the cathartic will to free herself from the inconsistencies of the contemporary lifestyle by magnifying its symptoms on the canvas. The artist establishes an ambiguous relationship of attraction and repulsion with her subjects: on one hand the hyper-realistic insistence on certain types of objects, taken as a paradigm of a certain status of economic well-being, manifests the fascination they exert on her (and on us) imagination, on the other hand; the systematic insertion of disturbing details and contradictory juxtapositions brings down the fake security induced by the system to open unbridgeable chasms of meaning.

To achieve this result, Mehrangiz Imanpour takes advantage of the surrealist composition grammar by re-reading it in contemporary art key elements and incorporates from the Pop Art the protagonism of the mass-produced consumerist object to radically altering its appeal. Whether the mass-printed objects by Andy Warhol or the advertising details emphasized by the painting of James Rosenquist – just to mention a few examples – flaunted a sparkling and impeccable appearance, Coca-Cola bottles, Mac Donald’s logo,  hamburgers and packages of Marlboros painted by the Iranian artist take on uncertain and melancholic features, as if they were scraps and residues of a civilization inexorably devoted to extinction. The desolate environmental or human catastrophe seem to allude to the desolate abstract or desert backdrops on which slender, barely sketched human silhouettes wander aimlessly, existential insects-like larvae, shadow-producing simulacra in search of an impossible conciliation with the world.

Sometimes the vision becomes even more crude and the canvas takes on the metaphorical value of an anatomical and emotional dissecting table in which the human being is torn to shreds to become eye, ear, hand or foot surrounded by ancient and modern objects that we can assume are the cause of human’s inner laceration. The idea of ​​introspection; understood in its most literal sense of looking inside, it is underlined by the recurrent presence of eyes (often feminine) that scrutinize the compositions framed by the canvas with an investigative attitude. Their alarming presence ideally places the viewer within the scene depicted as if he/she were one of the mysterious objects that populate it, or as if the canvas were a diaphragm that separates his/her gaze from another space in which his/her most secret mental projections  are free to expand.

The constant presence of internal / external, formal order / logical deviation, figurative / abstraction is is one of the most evident features in Mehrangiz Imanpour’s paintings. The artist pretends an objective detachment from her subjects (whom are individually represented in the most impartial manner possible) to lower the observer’s defenses through their immediate readability with the intent to transport him/her on the intimate and universal level of obsession and the return. For this reason, the elusiveness of her visual enigmas, rather than discouraging involvement, gives rise to an instinctive empathy that transforms the initial attempt at textual interpretation into an existential meditation on the uncertainty of the contemporary human condition. 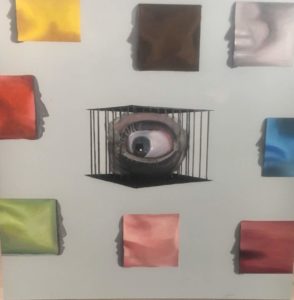 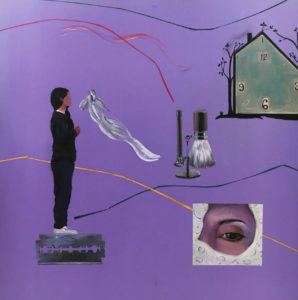 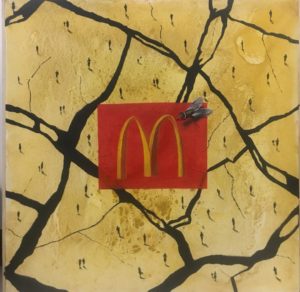