At Mtn in Bologna Epistéme: kn..

Barbara Kruger. The art of teaching the meaningles...

Barbara Kruger. The art of teaching the meaninglessness

In the group show American Art 1961-2001 at Palazzo Strozzi in Florence, which ended in August, there were displayed some artworks by American artist Barbara Kruger. With her world-wide fame, she is generally considered part of the so-called Pictures Generation movement, which pioneered a critical approach toward the American and global distribution of mass media culture. However, little attention has been undeservedly given, in Italy, to this artist, regardless of her being profoundly topical, and having been loyal to her poetic and style for more than 40 years.

There are two important elements with which we can recognize in her artistic practice, interacting in a deferential relationship of love and hate: image and word. At first sight, we can consider them mundane instruments, agreeing with the “I could have done it, myself” trend which characterizes many in our society. Nonetheless, where does Barbara Kruger come from and where does she want to go by using these languages? Why we can say that she is still a valuable artist we should care of, even after the digital evolution and the virtualization of social spaces?

The artworks by Barbara Kruger combine image and written text in order to acknowledge and elaborate the constructional mechanisms of reality; the appropriation of images from magazines, journals, advertisings is one fundamental point from which she starts a new discourse through those same images by zooming, cutting and combining them with written words. Their re-editing makes us think about the post-production methods used in the film editing. It is a parody of graphic and technical tactics applied to mass media for a larger distribution of her works at a street level.

Indeed, another fundamental and, often, underappreciated element is Kruger’s choice of public spaces for her artworks as a consequence of her protest against contemporary social structures where they should belong. The public space is where artworks are shown, encouraging a multitude of visual inputs whereby her bitter irony can cloak itself. The unsuspecting and unprepared seeker starts to think and reflect upon what is written and what one reads inside the work.

The space of the exhibition is peripheric, coherently with the quality of the images – nonetheless she does not refuse at all to show her artworks in museums and galleries in a sort of contamination of the institutional space. Her work displays the cultural aspects of the United States, their stereotypes and assimilation mechanisms. In this way, image and word are not just instruments, but also criticized objects due to the quality of the gaze they stimulate (they recall the male gaze and the objectification of women’s body) and to the structures they originate from: power, commerce and money. These three elements turn human existence into a mechanical loop of production, trading and consumption.

The fragmentation, editing and categorization of image and text refer to the sociality and commerce. Those living bodies are built, like the images and words of her artworks, abiding by the whims of power and money. Word and image are nothing but the main servants of these structures: they contribute to the spreading of the distorted capacity of defining what we are and who we are not. “I shop therefore I am” (Untitled -I Shop Therefore I Am), 1987, so I shop in order to be something. “I am not myself” (Untitled – You Are Not Yourself), 1984, because I am not defined by what I think, but rather by what other people can give me for a sense of belonging.  The individual is oppressed by an interior silent drama: this ignored emotional state merges from the depths of our souls and produce mixed sensations according to context, people, history – something which Kruger often tries to reach through her works.

Her art is something that makes meaning; it wants to fill our minds with the awareness of who we are and what we see and read – it is important to recall the current exhibition at the Art Institute of Chicago: THINKING OF YOU. I MEAN ME. I MEAN YOU (Sept. 19, 2021– Jan. 24, 2022): to read is not to make sense; we have to try to make sense of what we see and read by ourselves. Being aware of ourselves and our society is also stimulated by Barbara Kruger’s artworks: she teaches us to read in order to know and to understand in order to think. What is that we have to understand and reflect upon? That we are surrounded by images and words which are talking about meaninglessness, to begin with.

Cited in the article:

THINKING OF YOU. I MEAN ME. I MEAN YOU.
The Art Institute of Chicago
19 September 2021 – 24 January 2022
Regenstein Hall, Griffin Court, and various museum locations. 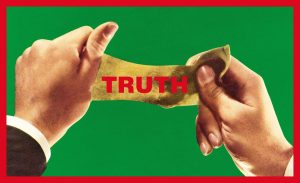 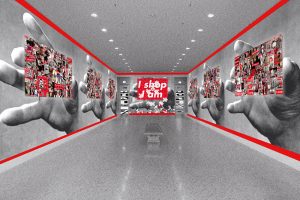 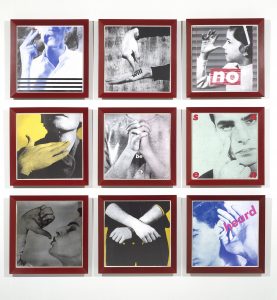 Barbara Kruger, Untitled (We will no longer be seen and not heard), lithograph, photolithograph, serigraphy on paper; cm 52,1 x 52,1 each of 9. Minneapolis, Walker Art Center. Walker Special Purchase Fund, 1985 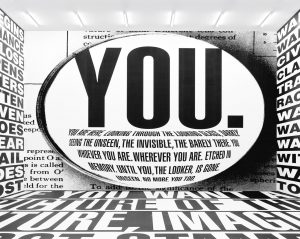