Bowie before Ziggy and A clockwork Orange

Bowie before Ziggy and A clockwork Orange

“David Bowie is not only the most extraordinary giant of pop music of the last forty years, he was a holy body, to use the expression coined by the architect Luca Ruali, he was for me and for many others the beginning of a vocation, the godfather of a passion, an example to follow, a father to defend always and in any case, and the perfect symbol of all the possibilities that man has to improve himself. […] But Bowie was a holy body, the beauty of dedication to beauty as the main value of the species, and there are no wrongdoings in his curriculum. ” So Gianluigi Ricuoerati on Rivista Studio wrote one of the most beautiful pieces dedicated to the disappearance of the great myth. Talking about a giant like Bowie is never easy, like paying homage to his crazy and Dionysian figure. The Ono Contemporary Art of Bologna decided for the third time to remember him celebrating his image through the twenty-seven shots by Michael Putland and the graphic work of Terry Pastor, designer who created the cover of Ziggy Stardust and Hunky Dory.

The year 1972, April, in the then residence of the artist, Haddon Hall, Putland portrays a Bowie before Ziggy, an artist placed before, before, one of his innumerable and prismatic macro projections of the self.

Serenity, brightness, beauty smiling and wrapped in the dress designed by Freddie Buretti, enter the collective imagination, on tiptoe, as if Putland had caught in those black and white shots, a precious, bright and rare intimacy like certain stars. It is said: “The idea was to get a look halfway between the image of Malcolm McDowell with a mascarate eye and an insect, it was the era of Wild Boys by William Burroughs … and it was a cross between this and A Clockwork Orange that began to put together the shape and appearance of what Ziggy and the Spiders were about to become. ” And it is at ONO that icons that have changed forever the history of art and culture, from cinema to music, meet in the backstage and in the rear of the photographic medium. In fact, in parallel to Bowie’s androgynous grace, one can admire his own voyeuristic thirst on the B side of one of Kubrick’s absolute masterpieces, Arancia Meccanica, based on the eponymous novel by Burgess, a film that is preceded by his fame. still mistakenly remembered for the excess of violence shown rather than the reflection that triggers inherent in the freedom that every man has to choose between good or evil. 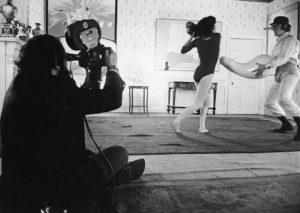 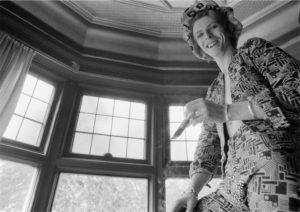 On the occasion of the forty-fifth anniversary of its release, the film is shown to the viewer through the shots the Dmitri Kasterine, who began his photographic career in full swinging London. It was Kubrick at the end of a day on the set of The Doctor Strangelove of 1964 asking Kasterine to work for him, adding “You stand in the right place”. Thus began their partnership, which led Kasterine to work on the 2001 sets: A Space Odyssey and A Clockwork Orange.

In the photos of the set of Clockwork Orange, the Kubrick lover of detail is revealed by the care and attention that the director dedicated to each scene, crazy shots of Kubrick with the camera lying on the ground under the famous phallic sculpture The Rocking machine by Herman Makkink, probably inspired by the Princess of Brancusi.

Nothing in Kubrick’s films was left to chance: from architecture, to furniture, clothing and music, everything was masterfully combined by the director’s synaesthetic eye.

Once seen, how can we forget the clothes designed by the Italian talent Milena Canonero? Or the tables, chairs and dispensers made by the sculptor Liz Moore, like the works of Allen Jones? How to forget Rossini and Beethoven alternating between the Korova Milk Bar and a city underpass?

If all this lies between the surreal and the fantastic, even more intriguing is to observe the preparations on the set, discovering in this case a unique intimacy between the director and his own work. Both Putland and Kasterine have had the advantage of being in exactly the right place at the right time, combining it with the ability to steal precious moments of singular beauty from myth.

In the spaces of ONO, Bowie and Kubrick meet, both unpublished, both famous promoters of an idea of ​​Wagnerian art, total, where art and aesthetics interpenetrate to three hundred and sixty degrees, demonstrating a different reality, where the immortality of a work remains dichotomically eternal and contemporary. Two immense artists with whom today as tomorrow is and will need to be confronted.