Bowie before Ziggy and A clock.. 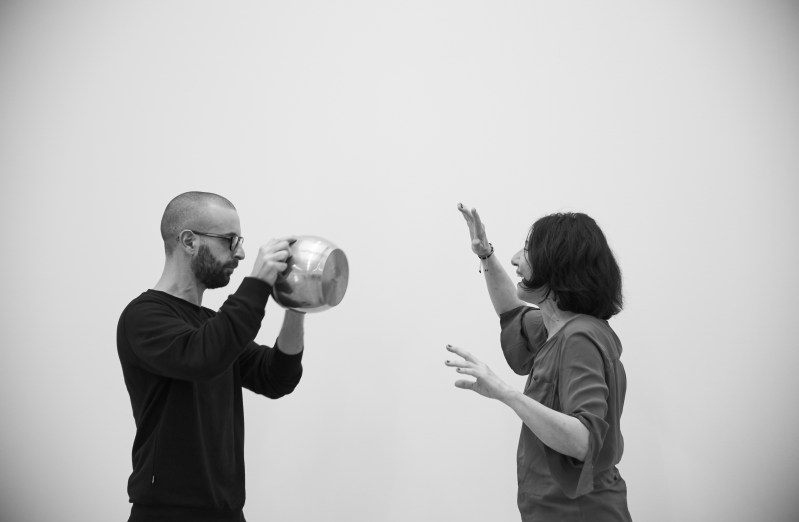 The 60s decided a radical rewriting of contemporary codes: the introduction of strategies based on textual information, emphasis on processuality, abolition of disciplinary boundaries and prevalence of the concept on the medium generated a new model of expanded art that irreversibly revolutionized any creative field. The convergence of expressive tools activated an unprecedented synergy in an international network of choreographers, musicians, painters and sculptors who found its epicenter in New York in spaces like the Living Theatre, Yoko Ono’s atelier or George Maciunas’ AG Gallery. The meetings and collective performances of that decade perhaps represent the last convincing utopia of the twentieth century, a unique moment of experimentation, collaboration and invention without compromise which determined the subsequent development of research prolonging its consequences till nowadays.

A key figure of that period of rupture of the schemes was the Italian-American choreographer and dancer Simone Forti, to which Enrico Astuni Gallery dedicates a special project as part of the collective 66 | 16 curated by Lorenzo Bruni with the weekly revival of one of her first performative actions. Born in Florence in 1935 in a family of Jewish origin, she moved to the US to escape anti-Semitic persecution; after a brief period of study at Reed College in Portland where she met her first husband Robert Morris, she addressed her artistic training by participating in the dance improvisation workshop founded in San Francisco by Annah Halprin. In line with the minimalist trends of the plastic arts, the aim of the experiment was to purify the dance from unnecessary elements and spectacular and virtuosic effects to restore it to its specific field: the material conception of bodies in motion. Denying any predetermined coding, post-modern choreography wanted to reestablish the critical dynamic of the scenic action by reintroducing the concept of  atelier, where the show become performances and the audience participated in the drafting process of the play.The first results of her research were made ​​public in 1960 at the New York collective Happenings at the Reuben Gallery where also Jim Dine and Claes Oldenburg were exposing: Simone Forti’s Dance Constructions were based on isolation of movements taken from the context of everyday life that, replicated as individual and purposeless actions, generated a new alienating choreography alphabet which was capable of interacting with the unpredictability of case.

Her minimalist language freed the dancers from the rigid artificiality of choreographed movements and costumes to explore the possibilities of self-expression of the body through everyday prosaic and pre-symbolic movements, such as childish gestures or animals and plants’ attitudes. Segmenting and repeating trend lines identified from any spontaneous physical activity, the artist creates a musical sense of pause, time and interval and building a ritual harmony that comes from the respect of the specific qualities of each movement and urges the viewer’s identification. All that is natural becomes material – movement for an improvisation that rethinks the relationship between body, object and space in a conscious choice between conflicting instinctive impulses.In May ’61 Simone Forti presented in Yoko Ono’s atelier the project entitled Five Dance Constructions & Some Other Things, 9 pieces of experimentation with materials that young dancers pioneers of Postmodern Dance like Trisha Brown, Yvonne Rainer and Steve Paxton indicated as a source of inspiration for the Judson Dance Theatre. To the section Some Other Things also belongs Censor (performance for two people, a pot, screws, audio) that Enrico Astuni Gallery received on loan from the MOMA in New York which houses the statement due a specific request of the artist who wants to give to the work a new life.

Every Thursday until May 15, two performers of different ages repeat the action following the original instructions that provide the singing of a popular motif selected by the interpreter with the acoustic accompaniment / contrast of the rattling of screws contained in a metal pot stirred by the other actor. The representation, practiced by different people and open to a wide range of possible incidental changes will be documented by a sequence of photographs that testify the uniqueness of every action in a poster / document that evokes the Fluxus atmosphere and its compelling imperative towards the here and now. In the exhibition in the gallery the live performance is a counterpoint to the recent video Flag in the Water (2015 ) which shows Simone Forti dipping in the waters of Mississippi River together with an American flag divided into two parts, one with stars, the other with strips. Interacting with the wet tissue that becomes heavier and with the river lapping against her body in symbiosis with the flag, the artist seems to want to take upon herself stories and sorrows of the people that symbol represent to dissolve them in the waves and return concrete ideal of freedom that it originally expressed. 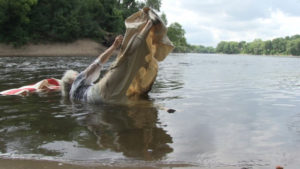 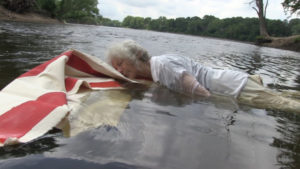 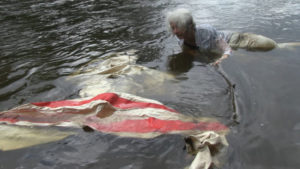 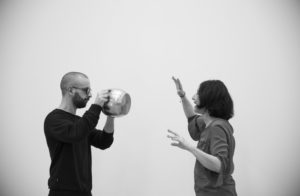 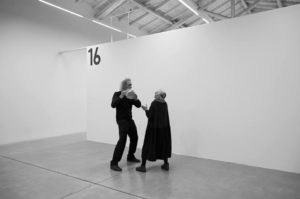