From the Commedia delle macchi.. 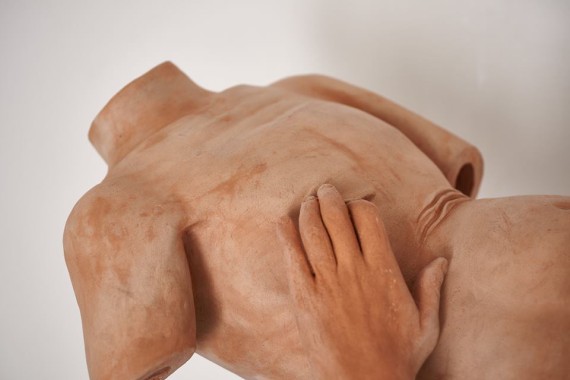 Galleria de’ Foscherari presents a new exhibition project that, evoking the masterpiece of James Ensor entitled The entrance of Christ into Brussels in 1899, compares the poetics of Piero Manai (Bologna, 1951-1988) and Luigi Presicce (Porto Cesareo 1976). The two artists, joined by a research that uses the body as a material for artistic creation and theater for personal introspection, both used as a reference for one of their works the famous painting in which the Belgian master depicted the apotheosis of the painter portrayed himself as Christ surrounded by a creepy crowd of masks inspired by the carnival of Ostend. If the grimaces and the skeletons that fill the composition of Ensor exacerbate the absurdity in a whirl of unbridled painting, in 1980 Manai takes all those grotesque faces isolating and expanding them on fragments of linen paper in an installation of more than 50 drawings entitled Self-Portrait with masks 1899.

This catalog of madness vigorously dashed in coal seems to surround and attack the viewer putting him at the center of the parade to show how even the traditional tools of painting can convey an actionism in line with the Central European neo-expressionism of those years. The shape becomes a privileged action field of a creative process that wants to regain the primary and archaic state of the image and to declare at the same time its origin in the art history. The masks, which are vehicle of revelation and no longer of concealment become pretexts of self-portraits that explore the human identity through the grimaces produced by the passions to investigate facial expressions in a similar way to the modified polaroid in which the artist expressed his lonely exhibitionism.The emphasis on corporeality in its integrity or breaking monumentalizes suggestions that involve sexual impulses, death or disgust actualizing the topic of the individual as a living person. Also Luigi Presicce’s research, overturning the idea of ​​disguise usually connected to mystification, uses masks and hermetic symbols as tools of a contemporary mysticism that transforms his paintings and performances into magical ritual actions. In the tableau vivant inspired by Ensor painting that evokes the stoning of St. Stephen, the artist appears as a shaman voted to self destruction driving a surreal carnival wagon carrying a threatening crowd of characters – obsession. The elegant composition cools the color vertigo of its iconographic source in a solemn choreography where sacred and profane history come together in an enigmatic synthesis that combines stylistic models derived from the Italian Renaissance to suggestions that are rooted in folk traditions of rural culture in Puglia.Manai and Presicce place themselves into the work to embody the fusion of art and life in a total experience where the body acts as a bridge between the contemporary man, his cultural past and nature.Both of them at different times in their careers wanted to pay homage to Joseph Beuys, the ideal father of this radical stance, in two paintings that depict his legendary hat made of felt filled with magical fire emphasizing its double meaning of heat generator and agent of alchemical transformation.The dialogue between the two artists goes on in a dense network of intellectuals analogies and formal similarities: the monoliths in which Manai investigated the material and energy of color exploring the sculptural possibilities of painting are a counterpoint to the impenetrable geometric solids painted or molded by Presicce as if they were containers of a heretical wisdom destined to few initiates to art. Diluted and mutilated bodies through which the first sought the original unity of figuration that survives the harshest subtractions give off the same archaic charm of sacrificial scene in which the other interprets the dismembered body pieces as relics and talismans that materialize the complex somnambulisms of his imagination. In The certification of hands Presicce plays a disintegrated idol or demon recalling the episode of the amputation of the fingers from the corpse of Ernesto Che Guevara as evidence of his murder before making his body disappear. Hooded figures, blacks angels and secular priests celebrate the mystery of an impossible recognition with the intensity of an hallucination that rejects the dynamics of rational thought to project the viewer into a parallel reality where only the intuition can grasp the symbolic efficacy of visionary apparitions happening in front of his eyes. 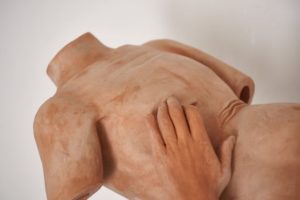 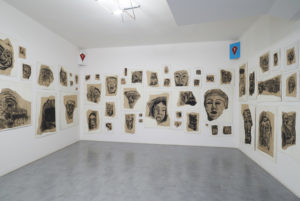 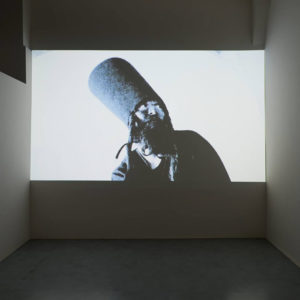 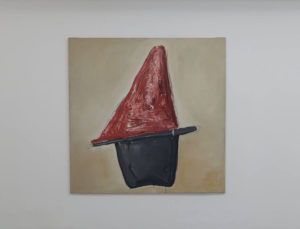