Belgrade is still carrying on the scars of the Nato bombs that hit the town during the Balkans war, in the meanwhile the Museum of Contemporary Art (built in 1958 in Novi Beograd) has just reopened and the National Museum, is under restoration and it is not visitable, although the website declares that the Museum is open from Tuesday till Sunday.

Furthermore the town is in perpetual renovation (for example the Sava river frontline), the young people look at the future and there is a proliferate of innovative activity. Among the others the buttonholes are: the Salon of the Museum of Contemporary Art, the Student Culture Centre (the space were Marina Abramović, in the Seventies, developed her first performances, before to arrive by Diagramma Gallery in Milan and by Studio Morra in Naples).

About the most innovative situations of this wonderful town, I have gather information directly from Ivona Fregl,  curator and art historian.
“It is very difficult to give a short, concise review of the contemporary art scene in Belgrade. As the capital of Serbia, Belgrade is a big city with numerous artists from a variety of backgrounds. Some resident artists were born in Belgrade while many others moved to live, create and establish a reputation in this city, thus making Belgrade a big glocal environment. Therefore, instead of producing a list of artists grouped according to their chosen artistic style (which is always questionable and would certainly result in a long list of names that would not be of any significance), I have chosen to present the web links to Belgrade galleries that represent most of the noteworthy local contemporary artists.”

Lucida gallery http://en.galerijalucida.rs/artists/represented the generation of artists which emerged on the Belgrade art scene during the 1980’s. This generation’s starting point is linked to the peak of marvellous state’s social, financial and institutional support for the artists during the 1970’s and 1980’s, then wars of the 1990’s and crisis came, but they continued to create; their art production continued all through this transitional period after the year 2000 as well. It is very interesting to follow their creative paths and observe how their creativity made the most of the social and cultural circumstances this generation of artists had to face during their careers.

Remont Independent Artistic Association https://www.remont.net/arhiva.html predominantly represents the middle generation of artists (now in their late thirties up to their fifties). Remont gallery became a symbol of the independent art scene in Belgrade, Serbia and worldwide, by establishing regional and international cultural connections between artists and cultivating the free spirit and innovative, uncompromising art.

U10 Art Space http://u10.rs/artists-and-curators/ gathers young artists, giving many of them a chance to express themselves publically for the first time. This institution, also run by young artists, makes a safe and, more important, a productive haven for the emerging artist. Obviously, there are many other artists not mentioned in these web links as well as a few other contemporary art galleries (for example O3one, Zvono, Magacin, Laufer || Eugster). In general, the contemporary art scene in Belgrade is a very diverse mix of creative preferences yielding a very rich blend of media – almost all artistic media and styles are present, from classical paintings and sculpture to the new media art, from abject to the art of memory and scenes from everyday life. In contrast to the depth and quality of art, the number of exhibiting spaces is extremely limited, and there is a persistent lack of public or private financing for art within the city. Within the art scene in Belgrade, we are all very well aware of the fact that, when crisis knocks on the door, culture is one of the first to feel the consequences and amongst the slowest to recover but,  in this case, the period of recovery has been lasting for more than two decades; to the point where many officials consider the current situation in art and culture to be a normal one which, in fact, is anything but normal, given the locally available talent and creative energy. 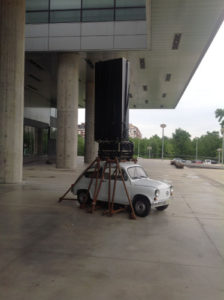 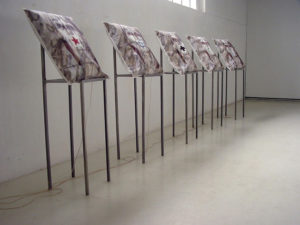