At La Galleria Nazionale in Rome, the exhibition Cosmowomen. Places as Constellation presents a site-specific assemblage of architectural projects curated by the Spanish-British architect Izaskun Chinchilla Moreno, Professor at the Barlett School of Architecture in London. Making up for the lack of a physical archive that among others, could document the works of over 65 female architects from different continents over a decade, this exhibition articulates as an assembly of collective thoughts and actions, drawing from experts in the field of classical culture, philosophy, anthropology, sociology, literature, theater, natural sciences and new technologies, according to a feminist choral performative approach.

Overall, the exhibition addresses a number of reflections on the conditions of living by rethinking the notion of space in a philosophical and physical terms with reference to the image of the armillary spheres, traditionally used in a pedagogical sense to investigate the relationships between earthly and celestial bodies, the earth and the cosmos.

In this sense, at the core of this feminist pluralist investigation is the question: ‘how we can live together? ‘, and this translates into an inquiry both on the ways of constructing space and on the conditions for an ethics of relationships.

The outcome of this project results as an assembly of progressist, utopian proposals which all aim to design practices of co-living and collaboration through sustainable forms that rethink the relationship between bodies and the environment, economy and the social collective by affirming the role of women both in architectural and social fields. According to this vision, the three site-specific individual spheres all reflect on the notion of existence and coexistence by rethinking places traditionally assigned to women and extending the limits between the private and the public space, resulting as a constellation.

In particular, the first installation revisits the space of the Gineceo, traditionally connotating the domestic area reserved for women and separated from the other rooms in a house, through a design approach that reformulates the conditions of domestic life through resilience and thinking about an ethics of care, memory, narrativity by reconsidering the role of women between the private and the public spheres. In this work, female thoughts and projects all converge in the construction of one house which presents itself as a primary unit for interweaving relationships according to principles of solidarity and complicity, while at the same time preserving an intimate and private condition for cultivating an autonomous thinking despite the social order.

The Onsen sphere takes its title from reflections on the ritual spaces of Japanese thermal baths to dynamically rethink the relationship between man and nature, between the private and the public spheres. The projects of the female architects, artists and intellectuals involved in this research all invite to assume a holistic view for the relationship between the human body and the landscape in terms of ecology and sustainability.

Finally, the sphere of Parliament proposes new housing solutions for public space, institutions and the urban space. By addressing considerations on the values ​​of dwelling and coexistence, this site-specific sphere draws a new architectural dimension in the form of a choral assembly, making explicit the necessity of positing a female positioning in order to reconstruct social and political spaces.

Through an accurate and meticulous choral construction, Cosmowomen. Places as Constellation, makes visible the significant contribution of female practitioners in the fields of art and architecture, thinking of itself as a constellation. The pedagogical intent of the projects further translates into the catalog and a series of collateral activities, including the format Cosmoschool, which is hosted by What’s on?, the National Gallery’s blog, amplifying the collective and participatory values of this exhibition. 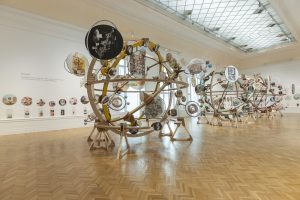 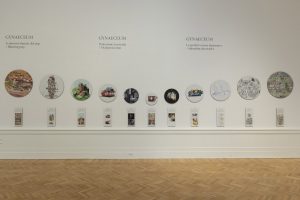 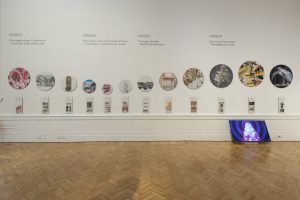 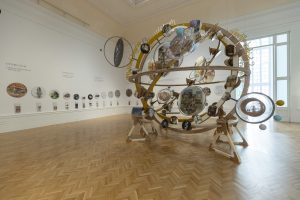