Ancient and contemporary meet at the Galleria Borghese in Rome. Protagonists are the works of Damien Hirst, in dialogue with Bernini’s sculptures, Caravaggio’s paintings, Canova’s sculptures and the many works in the gallery commissioned by Cardinal Scipione Borghese, on display with “Archeology Now” until 7 November 2021. The exhibition project was curated by Anna Coliva and Mauro Codognato, who wanted to create a unique environment, where the amazement generated by the magnificent ancient works, joins that for the contemporary thanks to one of the greatest and quoted artists of the world. After the important 2017 exhibition at Punta della Dogana in Venice, “Treasures from the Wreck of the Unbelievable” in which Hirst had imagined that the works on display were the findings of the great ship ‘Unbelievable’ (Apistos the original name in ancient Greek) , shipwrecked between the 1st and 2nd centuries in the Indian Ocean, near the African coast, forming part of the impressive collection of the freedman Aulus Calidius Amotan (known as Cif Amotan II) destined for an important temple dedicated to the Sun God in the east.

In the “Archeology Now” exhibition eighty of these works return to be protagonists. The different subjects, with refined handmade finishes, communicate with the surrounding environment: the preciousness of the Baroque meets, in a harmonious way, with the incrustations, the signs of time that cover the bodies created by Hirst, evoking the mythological world and the ancient world, not only in the subjects, but also in the majestic dimensions of some works, such as the sculpture Hydra and Kali, outside in the Giardino Segreto dell’Uccelliera. The project was carried out thanks to the support of Prada, which has always been interested in the arts and culture, in a multidisciplinary perspective and with a strong focus on contemporaneity.

Hirst makes his works even in small dimensions, with different materials such as bronze, Carrara marble, malachite, crystals, semi-precious stones. This preciousness is combined with the richness of the marbles, stuccos and decorations of the Borghese Gallery. The artist, like Cardinal Scipione, is obsessed with collecting, putting together antiquity and modernity in the multiplicity of different forms of expression. The chosen, ancient mythological subjects create a common thread between past and present, tradition and contemporaneity, confirming the intuition of the curators, namely the possibility of creating wonder and amazement.

The artist, fascinated by corals and the myth according to which they came to life from the blood of the decapitated Gorgon, attributes a central role to them, arguing that they make the chosen object even more unique, characterizing and embellishing it. Hirst invites the viewer to reflect on what is true and on what is not, however making the narration highly credible, thanks to the particularity of his works made with high manufacturing technique. The sense of “immortality”, understood as continuity beyond the instant of creation of the work, emanates from the works on display, referring to the importance of the sea, which preserves the objects, albeit enriching them with different forms of life, such as shells, algae, corals. However, Hirst’s meditation on death continues, as opposed to life, the only experience of which man is certain and of which he captures the moment. The stigmatization of the works is realized in the moment in which the action is carried out. One example is the “Female Archer” sculpture.

Also exhibited, for the first time in Italy, the paintings from the 2016 Color Space series, evolution of the Spot Paintings. As claimed by Hirst, in these works there is “the infiltration of human elements”. They are like cells under a microscope, whose motion is opposed to the stasis of the canvas. The reference to American art from the sixties can be seen in the works, whose eccentricity and vivacity of colors, albeit in the contemporaneity of the expressive line, amalgamated within the Borghese Gallery. Damien Hirst once again amazes and captivates. With his work he demonstrates how art can reveal different worlds, ancient and contemporary, but at the same time immortal in their fixed austerity. 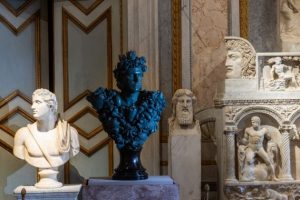 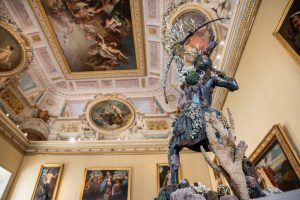 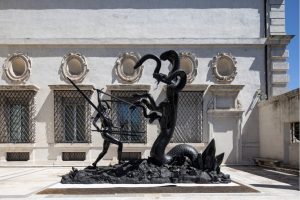 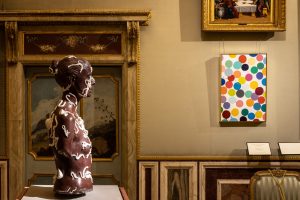