Daniel Arsham and his Still Life from the 31st cen...

The Perrotin Gallery in Tokyo, until 15 October 2022, hosts in its prestigious headquarters in Roppongi, on the first floor (for us Italians on the ground floor) of the iconic Piramide Building complex, for the second time in a few years, a solo show by the American artist Daniel Arsham.

Born in Cleveland in 1980, and grown in Miami, he then moved to New York, where he currently lives, to study art at the prestigious and exclusive Cooper Union for the Advancement of Science, an Art private school in Manhattan.

His work is concentrated in an imaginary space, between future history and fantastic archeology, interpreted through drawing, painting, sculpture, cinema, installation, performance and architecture. An interdisciplinary vortex emerges which, in an ironic and joking way, historicizes and “crystallizes” in a past-future those cultural icons (many references to the genius of Andy Warhol and cinema) and materials (luxury cars, for example) from our contemporary age.

Eroded casts of everyday objects made with geological materials (sand, selenite, volcanic ash) appear to the visitor as just found and unearthed after millennia of oblivion, remnants brought back to light from a new Pompeii of the future. So televisions, cameras, boomboxes, men, whole or in fragments, in contemporary clothes, stuffed animals, basketballs, cars.

All is rendered in senescence and/or fossilized to highlight the incongruous, and even in some ways dramatic and rash, acceleration of the rapid obsolescence of the technological tools of our digital age.

Use and abuse of consumption which, consuming the world, inevitably and consequently also consume us. An accelerated pace of our life time that should perhaps more often be questioned rather than supinely accepted.

In the main gallery five new paintings on canvas are installed, made with an acrylic color that has undergone a particular technique that makes the sign thick and full-bodied.

Metaphysical thought is present and evident and the painter’s hand is able to masterfully render what is still alive as dead.

Then two new sculptures of amalgamated metals, hybrid forms made of shiny steel and opaque bronze, timelessly suspended, in a surreal and dreamed state, between decadence and regeneration, placed right in front of the shop windows.

The first represents the Greek god Hermes, a reinterpretation of a 4th century sculpture preserved in the Archaeological Museum of Olympia.

The second reinterprets and remodels a detail of Michelangelo’s large sculpture preserved in the Church of San Lorenzo in Florence, depicting Giuliano de ‘Medici, second son of Piero il Gottoso and Lucrezia Tornabuoni.

Finally, in the adjacent room, three white (gray) film posters made of hydrostone, quartz and selenite are presented: E.T., Back to the future and 2001 A Space Odyssey.

In the artist’s poetics, they, which once advertised the show or adorned the bedrooms of the most avid fans, become artifacts from the past, in a process that from a syntropic desired becomes an entropic creation.

What is presented as perfect or almost perfect inevitably leads to imperfection.

The artist simply accelerates the vision and gives us a snapshot from the future where the various pasts tend to flatten into an indistinct and timeless unicum of accumulation.

In short, to paraphrase the philosopher Soren Kierkegaard, “life can only be understood by going back; but it must be lived going forward”.

A look from the 31st century can only help us, then. 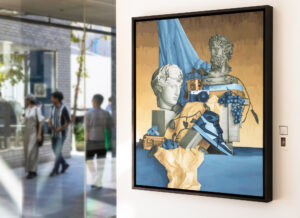 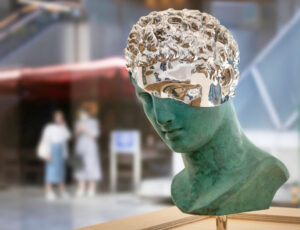 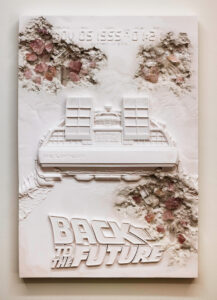