Until September 26th, the Etru, National Etruscan Museum Villa Giulia, merges with contemporary art by hosting the exhibition Dead Nations. Eternal version by Russian artist Evgeny Antufiev, curated by Marina Dacci and Svetlana Marich. “Evgeny Antufiev – says museum director Valentino Nizzo – tried to grasp the essence of Etruscan art on the formal level through the choice of materials, but also on the content and ideological level in comparison with death and especially with the regeneration that follows”.

Since he arrived in Italy, about ten years ago, the artist has been very impressed by the ability of Italian culture to absorb and stratify, giving rise to new ways to hold together the path of time. This characteristic is strongly related to his working approach, which is characterized by two closely connected lines: the first is the denial of linear time, which puts in the condition of not seeing past cultures as dead cultures but, on the contrary, to take them as part of the cycle of human history. The second fundamental point is the search for a symbology that accompanies the history of past civilizations and that is expressed through a series of archetypes traceable in different cultures.

Starting from his own interpretation of this past civilization, he has built, through his works, personal narratives, which invite the visitor to dive into the mind of the artist and, at the same time, to create subjective interweaving.

The first work that the visitor encounters entering the museum is the travertine obelisk positioned in the center of the courtyard, a tribute by the artist to the structure of the villa as a place able to reactivate a relationship with the past, connoted by a series of “modern” hieroglyphics. Two other works are present in the outer space, a fountain and a vase placed in the nymphaeum, both connected, both for the form and for the function, to the intrinsic meaning of water, that of generating new life. The fountain is characterized by a bronze mask, which is one of the archetypes of the artist, while the vase is a reference to those used by the Etruscan civilization to transport water but also to contain the remains of the deceased, because water was connected to an idea of regeneration and life.

In a wing of the upper floor, however, the works are arranged according to a search for camouflage and evocative relationship with artifacts that recall the customs and daily life, found mainly in the tombs. The long corridor culminates in a room entirely set up by the artist who, combining modern and ancient language, gave life to his own idea of a museum. The works, with fluid forms, appear raw because they reflect the physical presence of the artist and his particular way of working the material, you can see it from the footprints imprinted on the different surfaces.

From the choice of artifacts with which to interact, to the materials that recall the concepts of transformation and eternity, metal being an imperishable material, Evgeny Antufiev’s project therefore aims at the comparison and the connection with an ancient civilization that, while being part of a distant past, continues to speak to our present. “Art is a puzzle made of symbols – says the artist – and you can always find new connections”. 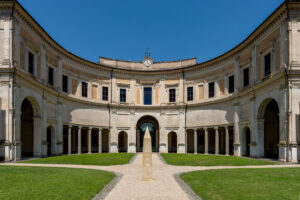 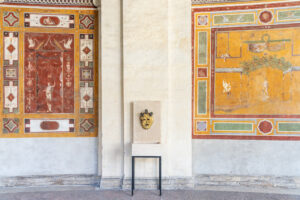 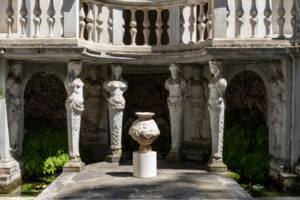 Sofia Zin (Rome 1998) studied at the University of Rome Tor Vergata, where in 2021 she obtained a master’s degree in Art History in Rome from Late Antiquity to present times. She is passionate about cinema and literature, she approached contemporary art after having conducted studies on the painting from the Roman sixteenth century and on the architecture of ancient Rome. She currently writes for Juliet art magazine and participates in several Crit of urban art collectives.