In conversation with Sara Pacu..

It is the last phase of Filippo De Pisis’ artistic work the focus of the exhibition “Di semplicità e di brivido”, running until 11 June 2022 at the P420 gallery in Bologna, in collaboration with Davide Ferri and Associazione per Filippo de Pisis in Milan. The works on display range from the 1940s to the death of the artist in 1956 and are placed in dialogue with the works of seven international painters: Richard Aldrich (Hampton, 1975), Michael Berryhill (El Paso, 1972), Luca Bertolo (Milan, 1968), Paul Housley (Stalybridge, 1964), Merlin James (Cardiff, 1960), Mairead O’hEocha (Dublin, 1962), Maaike Schoorel (Santpoort, 1973), who were called to dialogue with de Pisis, thus rediscovering that deep sense of contemporaneity and innovation.

The works range from works on paper and drawings depicting the young boys loved by De Pisis, characterized by a delicate line and ethereal contours that tend to dissolve in the representative space, and by canvases executed with mixed techniques, such as oils and pencils, characterized by representations of nature, the landscape and its colors. De Pisis’ link with poetry is evident and indissoluble. Born first as a poet and later to become a painter, lyricism and emotional tension are essential in his artistic language, as well as the representation of the soul of things, with particular attraction towards everything that tends to decay. It is thanks to the intermittent and pointillist, but at the same time impressionist, pictorial stroke that De Pisis managed to find a formal and expressive balance, which represented his restlessness of the soul, as in the texts of the poems of his reference authors, such as Leopardi and Pascoli.

The suffering of living is associated with an always lively and marked desire for happiness, in the way Leopardi himself defined it in his famous sentence: “Life and the absolute lack of illusion, and therefore of hope, are contradictory”. And it is in the course of this research that De Pisis experimented with different means of expression, different points of view on different levels and suspended atmospheres. The backgrounds, although for the most part soft and pastel-colored, attract the viewer with magnetic force, reviving timeless atmospheres and objects inwardly. An almost immortality of transience, in which petals, flowers and landscapes come to life vibrant in the light and brightness of the composition. Simplicity and thrill are the same words used by the artist to characterize this pictorial period, thus resulting prophetic, eloquent and conceptual. And starting from De Pisis’s so contemporary message, the artists present in the exhibition created their works by engaging in dialogue and confrontation with the work and poetics of the master from Ferrara. In the second room a site-specific area is circumscribed, purposely not finished, which recalls the works not completed by De Pisis and contains further works inside, disclosing and emphasizing their delicacy and peculiarities.

Moving through the exhibition space, the viewer encounters the dialogue created between the works of the various protagonists of the exhibition. The invited artists take up, in a completely subjective way, the peculiar traits of De Pisis’ painting, reinventing and reworking them. The chosen subjects, the colors, the perspectives, relive in the proposed works, such as in Tree by Merlin James, where the different levels are defined by two colors and the natural element stands out in the foreground, characterizing the representation. The floral element comes to life in Tulips Reinagle 2, by Mairead O’hEocha, which represents the vitality and harmony of the shapes, placing the flowers in the foreground and immersing them in a leaden sky of quick brushstrokes, capturing, in such way expressive peculiarities of the Ferrara artist. Luca Bertolo in Untitled, 20#12, engages in dialogue with the young boys represented by De Pisis, proposing a monumental and heroic idea of ​​himself, while holding his own head and thus representing himself as winner and victim.

The pictorial trait of Paul Housley, for example in Dogs on Leashes Cats run free, demonstrates how the artist has assimilated the master’s lesson in the representation of planes, verticality and timeless representation, where the concept of art plays a fundamental role. Abstract compositions characterize the works of Maaike Schoorel and Richard Aldrich, as if one wanted to represent the essence of painting through the free and extemporaneous use of color by reproducing the De Pisis’ fast strokes painting, a means by which the empty and full spaces are defined. As reported by the text of the curator Davide Ferri: «Michael Berryhill‘s work is characterized by a very close foreground, where the main figures appear or expand, stretch and adapt to the surface to occupy all the available space, in the middle of an incongruous landscape».

“Di semplicità e di brivido” offers the opportunity to enjoy the pictorial message of De Pisis and how it, with its stylistic modules, continues to be a source of inspiration and study for contemporary artists. 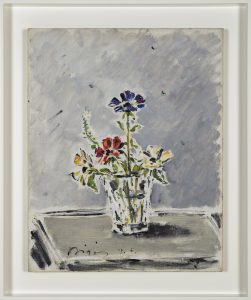 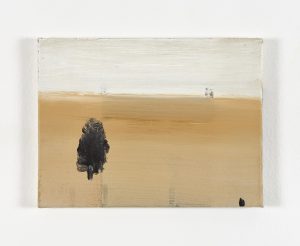 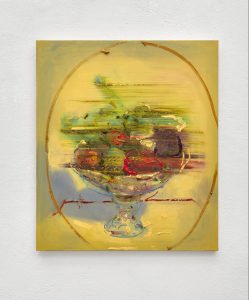