The Queen of the Curves is the nickname given to Zaha Hadid, an architect and designer of Iraqi origin, born in Baghdad and then naturalized British, by the prestigious London Guardian.

A genius, one of the greatest exponents of the deconstructivist architecture. A great personality, pure talent, unfortunately passed away in March 2016, when she was only 65 years old.

Dongdaemun Design Plaza (DDP), in Seoul, is one of her most iconic and amazing works, set, in perfect balance, despite the contrast between ancient and modern and despite the inevitable pre and post-realization criticisms, in the square in front of Heunginjimun, the Eastern Gate, Korea’s great cultural treasure, one of the four entrances that allowed access to the fortified part of the city.

The project (costing around 450 million US dollars in total and created in collaboration with the Korean firm Samoo Architects & Engineers), started in 2009 and inaugurated in 2015. It occupies the space that was, until 2007, the Dongdaemun Multi-Purpose Stadium.

During the construction works, the well-preserved remains of a 16th century Piazza d’Armi came to light. Remains have been moved and then relocated inside the Dongdaemun Park.

The complex, since the beginning, has become one of the great tourist attractions of the capital. Already in the first year over 8.5 million visitors have been there and a constant flow in the following years of about 6 million, attracted by the futuristic forms of the complex and by the quality of the events that are periodically held there.

The DDP is spread over eight floors (four of which are underground) in an area of almost 87,000 square meters: a series of exhibition galleries, conference rooms, a Design Museum, an educational center, a library, a “Design market” open 24/24 hours a day, which make it the optimal catalyst for the cultural and social life of the capital (bars and restaurants are not lacking) and a perfect incubator for creativity and the exchange of ideas.

Zaha Hadid worked focusing on the concept of “metonymic landscape” (that is, to create something that indirectly describes the essence of the place through the medium of a deduced landscape, created through the conceptual integration of its historical, cultural, urban, social and economic aspects).

The park, over than 30,000 square meters, which also occupies the roof of the structure, reinterprets the motifs of the traditional Korean garden.

The structure with undulating and fluid surfaces, 280 meters long, seems to float on the ground, as if cement, aluminum, steel and stone, despite their evident solidity, had no weight. A feeling that, with the coming of evening, becomes even more evident when the approximately 40,000 micro-perforated panels that cover it, whose texture recalls ancient decorations typical of the place, make the light shine through from the inside, creating a masterful, not to say miraculous, complete dematerialization of the whole.

The interiors (acrylic resin, acoustic tiles, synthetic fiber, polished steel and stone), on the other hand, intensify this feeling. Lightness and abstraction, in a metallic vapor that gently envelops you: almost a total estrangement. Almost a mystical experience.

Construction is to take up: Architecture is to move, said Le Corbusier. How can you blame him?

One loses oneself, easily and willingly, in the dominant and clean white of these curves and spirals, ample and soft, which incessantly follow one another like in a magical tale. A fairy tale forever, with many beginnings and no end. 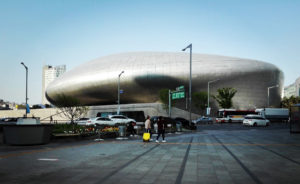 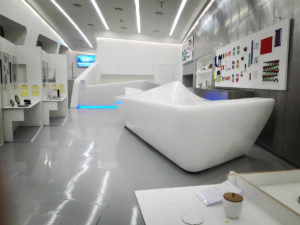 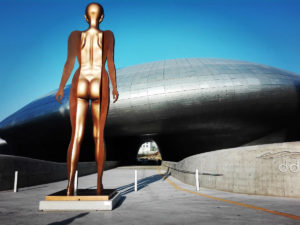 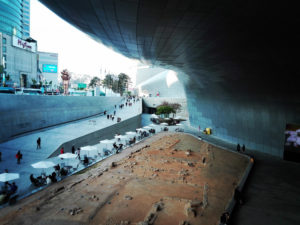