Ernesto Jannini. The art of gi..

Identity is essentially how ot..

For 20 years, Michael Elmgreen (b. 1961, Denmark) and Ingar Dragset (b. 1969, Norway), who together form the duo Elmgreen & Dragset, have been manipulating the unexpected and setting up traps that test the ability to intuition of the viewer forcing him to think creatively and not to look at things with unilateral logics.

Since Prada Marfa (2005), an environmental work located about 60 km north-west of the city of Marfa, in Jeff Davis County, Texas, near the U.S. Route 90 in a deserted area, the two artists are specialized in creating hyper-realistic environments where something always appears out of place, halfway between degradation and unfinished. In that case it was a Prada boutique with lots of original shoes and bags in the showcase, an object of desire blocked by a door that was always closed and that in the initial intentions was supposed to suffer a slow degradation that integrated it into the surrounding natural landscape. It was decided instead to make the installation permanent when, three days after the inauguration of the work, unknown persons vandalized it with graffiti on the outside after bursting inside and stealing bags and shoes.

At the center of the poetics of the two artists we find the exploration of the contrasting dynamics of desire, the meticulous observation of the places and roles of the art system, the constant osmosis between fiction and reality and the interest in placing the work of art in relation to a specific institutional, historical or social context.

Exemplary in this regard, the 2016 The Well Fair retrospective at the UCCA Center for Contemporary Art in Beijing in which the works of the two artists were exhibited in a series of stands that imitated the exhibition model of a trade fair. Some works were still packaged, wrapped in protective cellophane or half-installed, creating an ambiguous time frame that made it unclear if the fair was just finished or not yet started. The two artists theatrically orchestrate the spaces in which they exhibit, inviting the public to go through alienating situations and environments that include it in their enigma without granting a definitive intuition. In every room, corner or passage area it seems that a fleeting history is unfolding, the environments are conceived as large hyper-realistic sculptures to the point of seeming settings of an absurd but possible reality. The space seems to acquire its own performative capacity, it is charged with an energy that draws the visitor into the irresistible orbits of its multiple centers.

All these features return in Overheated, the new Elmgreen & Dragset exhibition at Massimo De Carlo gallery in Hong Kong. For the occasion, the third floor of the gallery has been transformed into an abandoned underground boiler room in which industrial tubes of various sizes, some of which are painted in improbable pastel shades, intersect in the space, forcing visitors to climb over, bend or get around obstacles to move around the exhibition. The fictitious tubes (which also emit steam at intervals) by visually communicating with the ventilation system located in the gallery ceiling, highlight what usually goes unnoticed. The metaphorical comparison evokes the often invisible and unaccredited work of a large undergrowth of actants engaged in various tasks in the world of art that, just like the heating systems that ensure comfort in our homes, are often invisible. At the same time the condition of abandonment in which the setting is pouring leads to reflect on the recent social changes in Hong Kong, once an important center of production of goods and products, today a financial center and hub of the art market where many industrial plants have been abandoned or reconverted to other intended use after the massive externalization of the manufacturing chain in cheaper countries.

The discontinuous and fragmented settings of Elmgreen & Dragset involve complex references to our present and critically rewrite the recent history of contemporary art, hybridizing references to minimalist formalism with conceptual incursions and a Scandinavian taste for design as an integral part of everyday life. To these aesthetic references is always added the insertion of alienating details that make their exhibitions resemble a crime scene, in which it is not at all obvious whether the event that gives rise to tension is imminent or just ended. The exhibition in question is also full of puzzles and misleading clues: the “boiler room” is dotted with objects that seem to allude to traces of human activity, as if someone had found shelter there after the place has been abandoned. Among these objects we find a black cast bronze car seat and a worn candle carved in marble on a copy in bronze of a small wooden crate used as a table replacement. In a corner, a pile of autumn leaves, made of metal and hand-painted, a precious post-modern vanitas, underlines the idea of a past time. The works, which at first glance might seem simple ready-made, are all sculptures produced with artisan care and the ambiguity of their presence increases the aura of mystery of the place. In the Elmgreen & Dragset set-ups the embarrassing short circuit created by the combination of elements that are fictitious while still adhering to reality according to conceptual or mimetic strategies brings out the weakness of any fixed point, which ultimately reveals itself as nothing more than a point of view. Their ability to pass almost inadvertently from lightness to depth, from eroticism to the most rigorous formalism, from radical criticism to divertissement and to make such contrasting instances coexist in the same work makes the fruition of their works an inexhaustible source of inspiration and meditation. 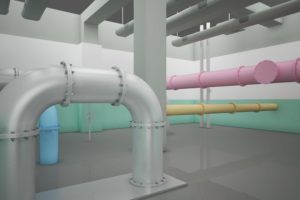 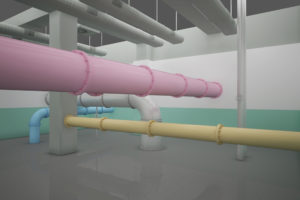 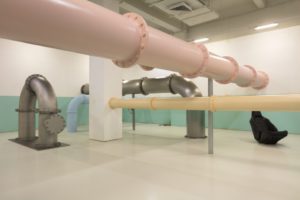 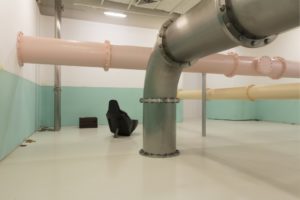 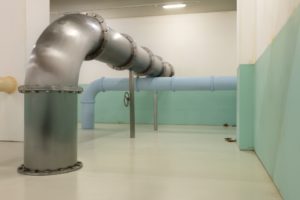