The Heresy of Folklore

Fabrizio Villa. A shot towards the soul

Fabrizio Villa. A shot towards the soul

The KōArt Gallery in Catania hosts People, personal exhibition of the photographer Fabrizio Villa, curated by Aurelia Nicolosi and Marilina Giaquinta, with five large photographic works presented. Fabrizio Villa, professional journalist and specialist in aerial photography, as a photojournalist for more than thirty years testifies themes ranging from social unease and immigration to the portraiture of protagonists of today through shots that contain hope and despair.

To grasp the essence of the chosen theme, Villa observes and analyzes what he will subsequently have to capture through the shot, keeping the right distance he needs to grasp it in its entirety; Villa is committed to tell the facts through his photographic images, adding his personal sensations and emotions and this is what gives him the opportunity to experiment with a new approach aimed at improving social inclusion.

The People exhibition tells the story of life by presenting collective portraits and human landscapes in which colors and details become keys to the observer’s analysis of the shot, shots in which Villa makes nature as protagonist as architecture, but primarily the human element counts, the latter so reduced by perspective, so small as to become a distant dot, where the shadows seem to become invisible: a human element that captured from the right distance and from above describes the turbulent relationship between the Earthly world and the Natural one.

In the five works presented in the exhibition, Villa tells about himself and his spirit and at the same time tells about the grandeur and the freshness of contemporary society; to do this the photographer in the same moment in which he presses the click of his travel companion, the camera, must necessarily activate eye and heart: telling people and facts becomes a way of life, in which one have to get down and identify oneself to grasp anecdotes that at first glance is unable to understand.

We find then: abandoned and anonymous bodies that oppose bodies lying along the crowded and warm beaches, faithful with the votive white sack along the streets of Catania that follow the fercolo of Santa Patrona Agata that oppose the white coat of the star chefs who emerge from the stalls of the Massimo Bellini Theater.

Over the years his images have been published in international newspapers and magazines: often they are bloody and painful shots, among which we can remember the death and destruction of Bosnia, the Intifada in the West Bank, the earthquakes in Turkey, the eruptions of Etna , the work of the last Calabrian charcoal burners, the new poor, the inmates of Islamic religion in Italian prison institutions and even the cloistered convents; many of these experiences resulted in reports that later became exhibitions.

”The shots of Villa – says the curator Aurelia Nicolosi – are visions that tell other visions, literacy of emotions, augmentative communication of actions, because, citing the author Ansel Adams, he puts in the photograph all the images he has seen, the books he read, the music he heard, and the people he loved. In other words, it simply puts itself and an extra glow. “ 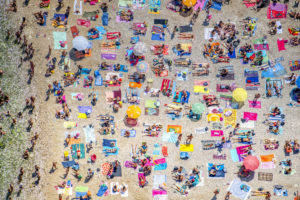 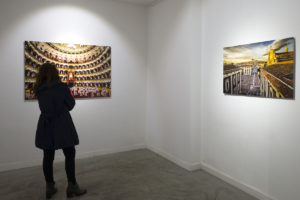