Things need time, especially if the topic is the design of a much-discussed contemporary art fair such as Roma Arte in Nuvola (from 17 to 20 November), now in its second edition and set up in the homonymous space designed by Studio Fuksas. There is a lot of confidence, but also a lot of skepticism about some organizational choices. Among the various voices in the stands, there are also comparisons with the other big trade fairs, which certainly range more not only on the international offer, but also on the entire collateral programming outside the fair. We know, however, that to be totally objective and critical, we must always evaluate the two scales. Rome is lost in the rules of politics, but summing up and throwing a sword in favor of the Urbe and the entire project, the assumptions, but also the optimistic spirit, on the part of the local employees and a part of the external exhibitors present, veer towards a more resolute and decisive direction in favor of the great fervor and cultural change that the city intends to carry out. 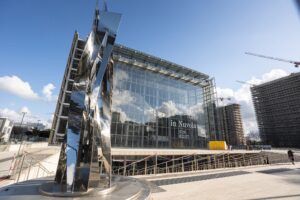 We can already feel, for example, the touch of the new artistic direction, which sees Adriana Polveroni, previously director of ArtVerona, strongly pragmatic and lucid in stating that «success must be honored and the best way to do it is to trace a path of growth». From this statement we perceive a specific guideline, which aims not so much at a comparison with other cities, but rather at the desire to draw a “systemic perspective”. If the choice fell on the reference to Rome as an attraction point for contemporary art in central and southern Italy and for its new or already consolidated collecting potential, we therefore expect to load a lot of expectation on any future artistic projects that will then tell the third edition and then see them satisfied. For now, however, in evaluating the first impressions just one day after opening, the selection of the galleries is certainly more targeted and thoughtful than experiment 0. In addition, the internal programming seems to be richer, seeing more frequently the presence of performances of high artistic profile (Elena Bellantoni, Romina De Novellis, Loredana Longo, Marcella Vanzo). 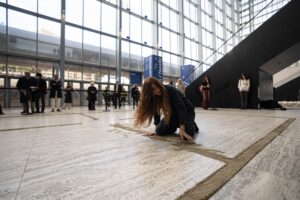 In LIMIT, the viewer is faced with the sense of disorientation and constraint inherent in the ontology of the limit: the artist Loredana Longo from Catania, gagged and crawling, confined in a square drawn with earth, tries an escape route crawling when the only possibility of movement – starting from its center – is between the thresholds of these micro environments. The salvific act lies in the in the capacity for adaptation where conventional and physical boundaries vanish. Longo, back in the center, through the reiteration of bodily action, loosening the braid, uses her hair to sweep away the boundaries, canceling their importance. 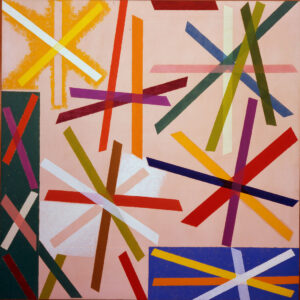 Starting from historicized art, the flagship exhibition project of the Modern Art section is under the signature of Tornabuoni Arte that focuses on the abstract painting of Piero Dorazio, paying particular attention to the mature period of his production, where it is the divisionist trait of the brushstrokes to express light and its ridiculousness. A project of such magnitude that emphasizes the Italian spirit, where set-up and curatorial methodology go hand in hand in relevance, but “dazzles” the surrounding context and the international scenario with its vibrant polychromy and the choice of a clean and essential visual narration. On the other hand, the project SI VIS PACEM, dedicated to the host country, which sees Ukraine and its artists as the protagonist (Vasyl Yarych, Yuri Smirnov, Viktor Kravtsov), appears contrasting: here dark and gray shades dominate, which underline the overall dichotomy between light and shadow, between peace and war, between serenity and melancholy.

Coming to the Contemporary, the deployed presence of painting is incisive: it is a traditional painting that sees figuration at the forefront, poised between definition and fading, partly young and fresh and partly emerging. Fortunately, this edition does not see the presence of invasive scenographic installations that draw attention only for an aesthetic point of view, but a strong return to that symbolic perception and rituality that is typical of pictorial and sculptural making emerges. 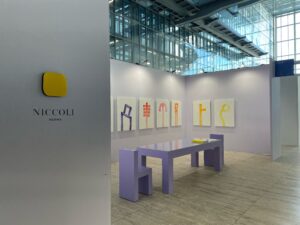 Among the stands with its pastel color that of Niccoli Arte Moderna (Parma) emerges, which exhibits the solo show Boyfriend by Jessica Wilson curated by Massimo Belli: a sequential series of small-format works with a minimal and essential trait, sign and symbolic, enhanced by an orderly and almost playful set-up. To the pictorial part, then, the artist connects the desire to create spaces that can be visited, on a human scale, also creating a piece of furniture capable of making the exhibition space at the same time dynamic and welcoming. For a mature painting, although she is very young, it is worth noting the artist Adelisa Selimbašić, presented by the Ipercubo gallery. Her canvases are distinguished by a soft but resolute pictorial trait, where the oil pictorial paste is uniformly spread and dissolved in pastel polychromatic shades. The woman’s body emancipates, manifesting itself on the canvas, through the choice of almost photographic compositional cuts where the framing of details prevails, in an almost dreamlike daily atmosphere. 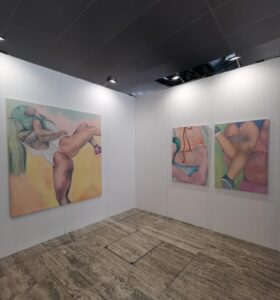 While Selimbašić’s figuration appears clear and delicate, that of Verdiana Bove, presented by the gallery 1/9unosunove and flanked by the artist Fabio Giorgi Alberti, seems more dilated. The body dissolves, but the figure appears at times subtracted from the canvas, like an ancient peeling fresco, where what remains is its outline. The perception of the bodily self is lost and blurred in the logic of a distant memory where color with large pasty brushstrokes invades personal identity. On the other hand, the figure of the double almost melts in Alberti’s mirror works. The observer confronts his/her alter ego with dystopian vision, reflecting his image in portions of mirror that veer towards diversified designs. 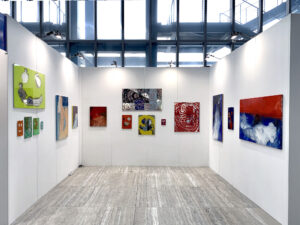 We therefore bet on the hypothetical winners of the Awards of this edition, which will enhance the best staging (Rock Award), the best overall project (The Best Award) and the best young artist (Young Award). A bit limiting was, however, the latter for many non-local exhibitors, since it will give the victory exclusively to artists residing in Lazio, excluding others in the national territory. 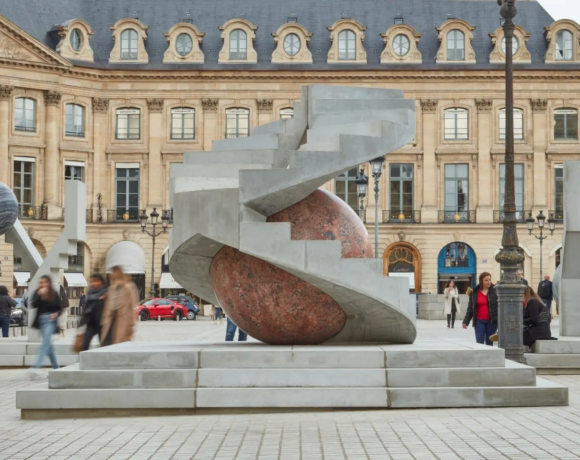