Florencia Martinez. Materially # 5 – Sewing up the...

Bill Beckley. The Name of the .. 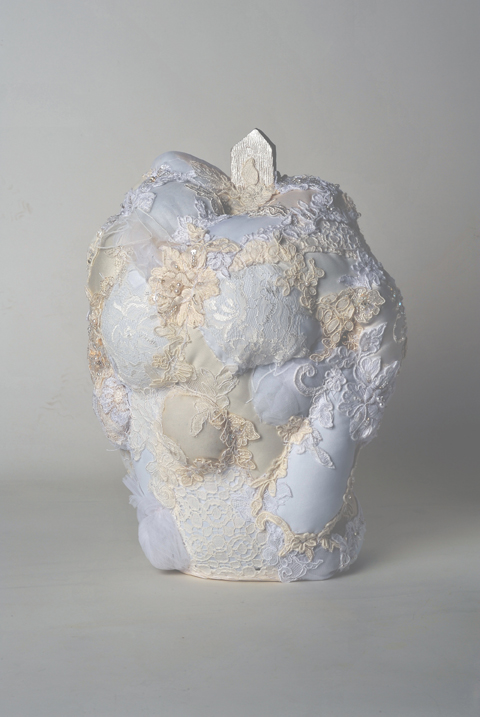 At Triennale Milano the space dedicated to art extends to the coffee. At the Triennale café, from October 2017 to April 2018, takes place the review named “Materialmente”, a series of exhibitions curated by Angelo Crespi to rethink traditional techniques in a contemporary way through the proposals of young artists already established on Italian and international scenes.  The small showcases hosted till now different works, from the refined “Popcellane” by Francesco De Molfetta, to the paper zoos by Alice Zanin, from the bright red synthetic bubbles by Beatrice Gallori, to the melted porcelains by Livia Marin.

The fifth and final event of the exhibition is dedicated to Florencia Martinez, which presents at the Triennale a dozen small fabric sculptures that echo the exhibition “H. Honey, Hungry, Home ” recently ended at Gilda Contemporary Art in Milan, where the artist presented larger works.

Florencia Martinez has been using cloth for several years as choisen material to recreate small corners of the world. The fabric is not a neutral and inexpressive medium, but a rich and speaking support. It is an already pre-formed material, pre-worked and often already predestined to a specific use that loads it with additional value and meaning. Thus, among the brightly colored fabrics and different patterns, we find lace from a wedding dress, or jute used for packing bags. They are fabrics that tell a story, speak to us about purity or resistance, about a moment of transition and change, about a threshold. “Home”, a small sculpture in white cloth, brings on the top of a mountain the door of the house like a crown, a stele well planted on the rock, but also a boundary stone, a war memorial, a sacred altar from which we can raise our intimate prayers. The thin black figure is always made from lace, but talks about loneliness and imprisonment, a woman close in her own forms, that seems to contract and disappear in order not to be seen, the hidden face and the tied hands, but nails like claws.

Many of Martinez’s works are linked to the female figure as a creature from which everything originates, a fat, vigorous figure like Mother Nature, the earth, or the ancestral woman. A woman who is a symbol of life, just as the fabric is a material historically linked to the feminine. “I find that the act of sewing is revolutionary “, says Martinez interviewed by Alessandra Redaelli “a return to ancient rhythms while everything is fast: a reappropriation of the time of manufacture, of manual skills”.

The fabrics of Florencia Martinez are padded and rolled up tight to form ropes with which she outlines figures and gives shape and contour to the world. The fabrics can be rolled up one on each other to form nodules, clumps of swollen tissue, like turgid seeds ready to explode, small cells with which she composes bodies and reconfigures the reality. The seams are thick, packed, nervous, like sutures of a wound. They have a different color compared to the color of the cloth in order to be visible and to create a pattern, a different moment. Because the wounds are part of the story. On these amalgams of colored rocks sit small figures, as on landscapes. A mountain at the top of which sits a man, in reflection, or a pile of round rocks on which stands a figure to hold, like Atlas, his world. Florencia Martinez’s sculptures tell of colors and stories of her native land, Argentina, with all the light and the heat that emanates from it but also with the suffering and contradictions of distance. These contradictions are healed through the long time of stitching and creation, through different pieces, of a new figure. 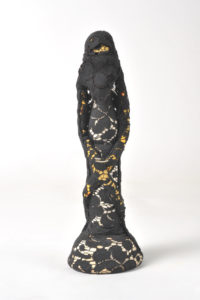 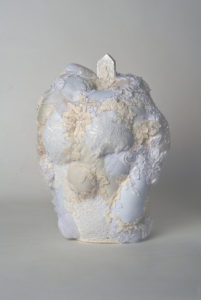