A walk among the most interest..

“Forme Pensiero”, let’s talk about it with Arjan S...

“Forme Pensiero”, let’s talk about it with Arjan Shehaj

Juliet Art Magazine is pleased to interview Arjan Shehaj, a young artist, originally from southwestern Albania, who studied painting at the Brera Academy of Fine Arts in Milan. In Shehaj’s paintings, the attention to the gesture and a great economy of the sign release an energy that configures a new order, in short, an invitation to use the imagination.

Grazia Palumbo: Forme Pensiero is the title of your personal exhibition recently held at the Galleria Bianchi Zardin, in Milan. How was your collaboration born?
Arjan Shehaj: The collaboration with the Bianchi Zardin gallery was born a few years ago, when the latter was still called Carte Scoperte. I met with the gallery’s owner at the exhibition opening of a competition in which I was selected, and from that moment we started thinking together. My personal show, inaugurated on 18th November 2021, was born from the need to collect in a single exhibition the development of my work, from the thoughts that manifest in many studies on paper, that then I develop, where it is necessary, even in large dimensions. I always look for a balance among the various shapes and materials, in the works on display, for example, I switch from the square to the rectangle, but also from the micro to the macro. At Bianchi Zardin it seemed that there were three exhibitions all in one: in the first room there were some works on large canvas; continuing in the second room, there were round works in wood that created an installation which grew up to the ceiling, making it seem almost like a galaxy, with protruding works on the wall; eventually, the last room of the gallery hosted a series of drawings on paper. By doing so, one had the feeling of being in a museum, also the duration of the exhibition, four months, recalls the museum format. The awareness that I could make my art become a job was born when I arrived in Italy, in 2004. Recovering a chronological path, at the age of nine I wanted to perfectly reproduce everything I saw and imagined. Later I wanted to learn how to paint professionally, deepening the different techniques: thus, I began my art studies. After high school I chose to sign up for the Academy of Fine Arts to become an artist, the meaning of this term was completely obscure to me. Now, being an artist is part of my work and of my daily life.

How was Forme Pensiero series born and what weight does planning have in your work?
Forme Pensiero, such as “thought forms”, is a title and a project that was born through reflections between me and the art critic Marco Tagliafierro, curator of the exhibition, together with the gallery owners Gaia Bianchi and Andrea Zardin. I think the title of the exhibition is really appropriate as, through the thought, forms are generated. In some works, this is more clear, and in others it is less, thanks to the superimposition of hundreds and thousands of lines that create abstract shapes on the surfaces. As far as my work is concerned, planning is really important: painting and drawing systematically, and almost daily, it is a need that comes from a mental project which then it materializes.

Behind your signs there seems to be an attempt to extend perception to a timeless, imaginative dimension. How much of reality is there instead?
Due my way of working and the adopted technique, sometimes it would seem that there is no beginning and no end, and, to be fair, many times not even I realize when I start and when I finish. The works do not represent places or specific shapes, everything is stylized. For example, the idea behind the works entitled Mjekrra is to represent beards, without depicting the face, while in some works this face is slightly more manifested. I am interested in presence and absence, in appearing and disappearing. Almost all of my artistic research is based on everyday reality, represented in an essential way, one can simply observe the branches of the trees in the woods or in the parks, all their intertwining, or the ones of the roots… The color present in the works, such as blue or light blue, can recall the sea and the sky, while red recalls the fire, reality is very present. I conclude by saying that I always find everything I need, just looking at what there is around.

And what role does color play?
Color and shadow define the shape of any object in nature, I think it is the universal language of the human, imagine if the world were in black and white: it would be a deadly bore. Black and white are technically not considered colors, they are flat shades, unlike all the others, where a certain depth is noticed. 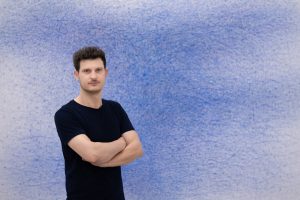 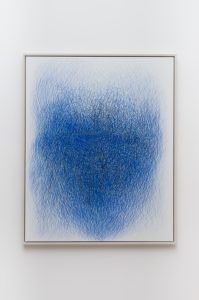 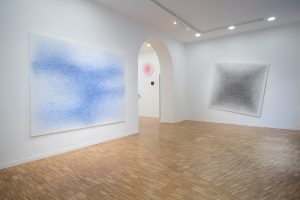