The secular couture of Olimpia..

Erin Shirreff. The object and .. 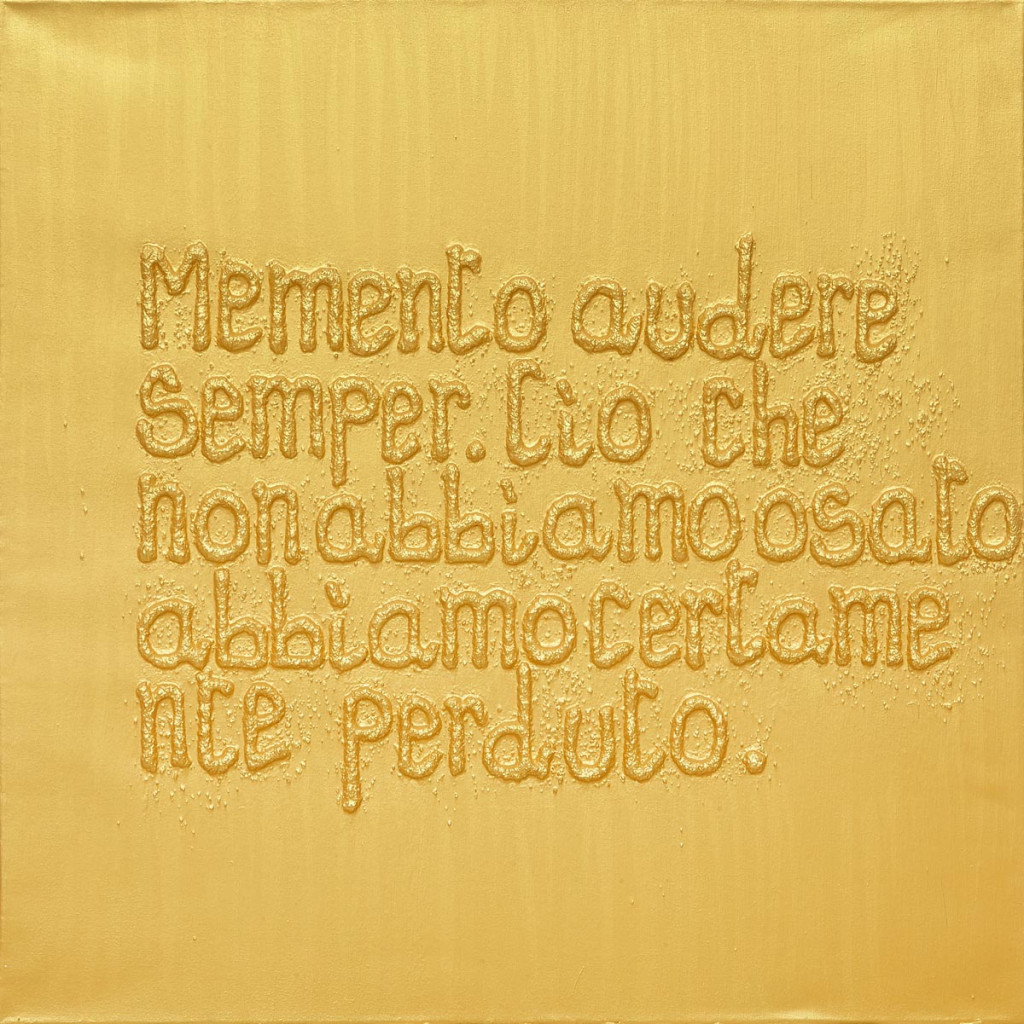 Mucciaccia Contemporary, a contemporary art gallery based in Rome, opened a new solo show on February 16th, named “Francesca Matarazzo. IPERGRAFIE” through march 17th. The exhibition, curated by Giulia Abate, presents an abundant body of works of the Neapolitan artist, who exhibits for the first time in Rome. The itinerary is built on a suggestive alternation of big black, white and golden artworks which start a deep dialogue with Italian and international literature.

The words of Pirandello, Dante, Pessoa, Montale and many more important authors become the subject of the works and occupy their surface, with a slow and rigorous rhythm or filling the entire space,  creating an image hard to read at  first glance.

To understand deeply these artworks we have to take some time, to appreciate the color, the brilliance and the emotional impact, but also because these works need to be read as a book page, a text that invites the viewer to meditate.

Time is a recurring theme in the research of Francesca Matarazzo. In this exhibition the artist seems to fix in time some pieces extrapolated from various literatures, underlining the needing of stopping and thinking about their meaning and their relationship with our experiences. Every phrase is always chosen in connection with the past of the artist, which is made of a knowledge with which now everybody can dialogue and empathize.

One of the most important factor is identity: self awareness, the contrast between how we perceive ourselves and what we really are is recalled, for example, in the famous passage extracted from the Luigi Pirandello’s novel Uno, Nessuno e Centomila. The conversation between the protagonist and his wife about his nose and the other little irregularities of his appearence, focuses on how people are different from the way the others see them. Man discovers a multitude of men inside himself and lives his life by reciting one or more parts to adapt. Matarazzo wants to encourage to get rid of all the masks and live always being ourselves.

Through materic lumps of stones and cement applied on vivid golden surfaces, the artist continues her introspective path, stemming from topics such as love, courage and regret.

Two works quote passages of Pessoa and Wilde with the following lines: “I wear the scars of the battles I have avoided” and “what we did not dare we certainly lost”. Both works can be interpreted as an admonishment for facing our battles without any fear of losing them.

The exhibition ends with a frame from the movie “Salò, or the 120 days of Sodom”, the only photograph installed. The image, portraying a man and a woman, both naked walking hand in hand which embodies the topics faced by the artist in this trip: the nudity representing the deprivation of influences and appearances, the courage of being themselves, the love beckoned  by a man and a woman starting a new path together.

Francesca Matarazzo was born in Naples in 1978. Lives and works in Naples. 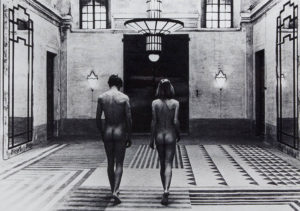 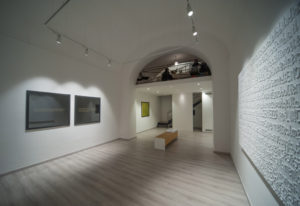