Impronte. At the Lercaro Found..

The fantastic world of Who the..

The Fundación Casa Wabi (located on the coast of Oaxaca, Mexico) is a non-profit cultural organization which, through the applied practice of the various artistic disciplines, aims to promote collaboration and social commitment of the whole community, from the youngest to the elderly, not only with contemporary art exhibitions, but also with workshops and animation courses that examine the local culture and material traditions.

Created in 2014, by Mexican artist Bosco Sodi, the foundation takes its name from the concept wabi-sabi (the Japanese way to a perfectly imperfect life and sometimes described as “imperfect, impermanent and incomplete beauty”), which represents a vision of the world derived from the Buddhist doctrine of anitya. Wabi-sabi teaches us to detach ourselves from the idea of ​​absolute perfection, to rediscover the beauty of an intuitive and spontaneous creation, perhaps incomplete but certainly rich in originality. As an integral part of Japanese culture, wabi-sabi, in its purest and most idealized form, is perhaps just that: an impalpable aesthetic paradigm that can only be fully understood after years of contemplation and only by intuition.

Based on this philosophy, Casa Wabi wanted to create a space conducive to interaction, hosting artists of different backgrounds. The Foundation currently runs two residency programs (Casa Wabi in Oaxaca and Casa NaNo in Tokyo), two exhibition spaces (one in Casa Wabi and the other in Santa María) and a film program on the coast of Oaxaca.

Casa Wabi was designed by Tadao Ando with the collaboration of Alex Iida and the local BAAQ office. The site overlooks the Pacific Ocean on 550 meters of breathtaking beach. The building is a mixture of minimalistic geometric concrete walls (which recall the spirit of contemporaneity) and the local tradition referable to the palapa roofs (made with intertwining dried palm leaves). Ultimately a truly unique project that came to life and grew up in an enchanting place.

Within a well thought out and balanced plan of dialogue between national and international personalities, the residency program in Oaxaca offers each individual artist the opportunity to develop his/her work through interaction with members of local communities and at the same tempo guarantees young Mexican artists the opportunity to experience a full immersion in Japan as a concrete hypothesis of cultural exchange and contamination between different stories and experiences (a bit like Villa Medici in Rome for French artists).

Casa Wabi hosts an exhibition space of 460 square meters where well-structured exhibitions lasting one year are set up. Its particularities (the environment, the interior spaces, the dialogue with the locals) make this space a lively laboratory for artists and curators. The director of Casa Wabi is Carla Sodi, while the director of Casa NaNo is Rafael A. Balboa.

At the moment, throughout 2021, the Fundación Casa Wabi presents the sixteenth exhibition of its exhibition program at the Casa Santa María, hosting Ernesto Solana‘s “Ecología feral” (Guadalajara, 1985). The thematic heart of the exhibition is the Anthropocene, a word used in 2000 by the chemist Paul Crutzen, to define the historical era characterized by the terrible catastrophes generated by the insane exploitation of man against the Earth. A very topical issue given that the exploitation of even the seabed is being discussed worldwide. Basically there are two “protagonists” of these exhibitions: the shell as an organic element, which represents the harmony between humans and other species during the pre-Columbian era; and the bottle of Coca-Cola, a symbol par excellence of global capitalist development. However, there is no shortage of other elements, such as macaw feathers, deer antlers, exoskeletons and pieces of rubber or marble. Through these sculptures, Solana explores the consequences of the Anthropocene and the new relationships between the notions of humanity and nature. For example, the installation “Feral Ecology (Anthropocene Studies)” presents a wide variety of bodies in which we find the artist’s interest in problematizing the taxonomic and anthropological studies deriving from colonialistic methods that have emphasized the tension between natural and artificial.

This project, in all its complexity, was curated by Alberto Ríos de la Rosa. 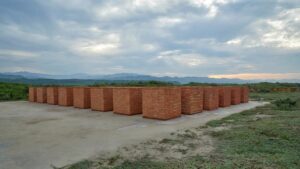 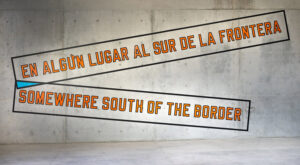