The fantastic world of Who the Bær. The search for...

The fantastic world of Who the Bær. The search for an authentic self

On March 2nd, the Prada Foundation in Milan (currently closed until further notice in compliance with government regulations) should have reopened its gates to the public with an exhibition dedicated to the British- Japanese artist Simon Fujiwara entitled “Who the Bær”.

Over the past decade, Simon Fujiwara born in 1982, has presented his installations on the international scene investigating the automatisms at the root of the ideological constructions that form the concept of identity. An investigation that he experiments with diverse means of communication: from sculpture to videos and performance, with which he records the daily life that he proposes through a personal universe made of absurd events. In his works, Fujiwara brings to light the paradoxical and illogical search of the human-kind for a fantastic, and at the same time, authentic reality.

With his new project, an installation conceived as a site-specific work for the Podium, Fujiwara transports the visitor in a fictitious and dreamlike dimension, inhabited by a bear with a large yellow heart. It is an original cartoon, with an indefinite personality made of its own attitudes, and characterized by a sexual intermediateness that make it impossible for the public to recognize its gender identity, hence the title “Who the Bær” or simply, “Who”.

“Who” only knows that it is a representation, immersed in a flat and visual universe, but open to every possibility life offers, which it explores in the search of an image that can define it. Through the appropriation of the images it encounters, “Who” experiences different types of identities; transforming and adapting to them, making the characters of the subjects its own subjects, regardless of their human, animal or object nature.

Its intermediateness therefore allows “Who’ to oscillate between subject and object, in any space and time, living in absolute freedom, outside those identity boundaries that classify every member of the contemporary society. However, “Who” risks to never be able to achieve its goal, which is to establish itself as something more than just an image.

Fujiwara creates an installation built almost entirely from cartons and recyclable materials, which on the plan reproduce the silhouette of a bear. The journey, a real labyrinth of drawings, collages and sculptures, presents to the viewer the evolutionary process of “Who the Bær”: from its birth as a simple sketch, to the search for one’s own identity through the succession of fantastic adventures in which we see joyful events, alternating with unpleasant moments.

The artist, through the different vicissitudes that “Who” faces in its search for an authentic self, brings attention to the important theme of self-representation and the fundamental role of media, which have lent themselves as perfect tools for manipulating their own self-perception, allowing anyone to reinvent themselves and organize themselves into a new identity.

The project, as Fujiwara himself states on his Instagram page, was born in 2020 and in particular during the first phase of the global lockdown, a period in which: “I started draw again, as much as when I did when I was a child. In that process of doodles and sketches I developed an original cartoon character called Who the Bær“. Fujiwara, as it often happens during the construction of a character, finds himself having to decide what identity to attribute to his cartoon, wondering about “what is the genre, the origin story, subjectivity, aesthetics, character, sexuality? And how would all these decisions of mine manifest through the simple communication of cartoon lines and colors?”

A decision Fujiwara faces by stating: “Making any identity decision on behalf behalf of Who the Bær felt regressive – why should a cartoon animal have to be so defined?”

“Who the Bear” makes its appearance in a historical moment, deeply marked by the rethinking of those boundaries, socially and culturally imposed, that define the concept of identity. Fujiwara, through “Who”, invites us to reconsider our relationship with otherness and how the different has become part of everyday life. 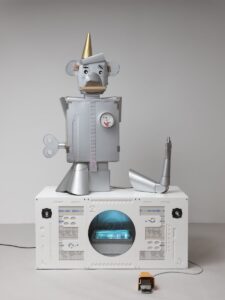 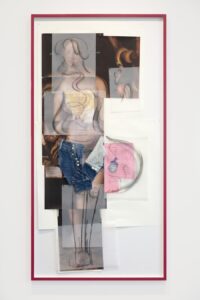