The fantastic world of Who the..

Double Fantasy: towards a new ..

Ida Tursic and Wilfried Mille. Between conceptuality and painting

What could happen if a French artist meets a Serbian artist? What happened to Ida Tursic, born in 1974 in Belgrade, and to Wilfried Mille, born in Boulogne sur Mer, the same year: to give life to an experience of freedom which however does not mean something meaningless, not even a jumble of ideas scattered on the canvas to make fun of the visitor who does not fully understand contemporary art, especially if conceptual is combined with painting.

Tursic & Mille began to work together in the early 2000s in an anti-painting climate, a year that confirmed their choice to become painters, as the principle of association will be the basis of all the works that will follow. The basic idea of ​​their art is that “painting is the favorite food of painting”, noting the obsolescence of the abstract and the figurative, minimal and conceptual fractions in 21st century painting.

The two artists experience freedom in art without binding to pre-built ideas, we could define them as anarchists in the positive sense of the term:  like many contemporary artists who feel the figurative particularly narrow, they argue that the latter is an outdated expression; however art repeats itself over the centuries, the figurative as well as the abstract will not cease to be among the protagonists in the current artistic panorama. The radical nature of conceptual artists lies not so much in looking at art from a passively visual perspective, but in making it a means for a methodological and structural investigation of reality, an interactive attitude destined to develop towards increasingly theoretical horizons.

It is no coincidence that the theoretical aspect of conceptualism in Tursic & Mille stems from the need to experiment with the intrinsic essence of art as a function, which reformulates the pre-existing cultural categories, beyond any convention. So does art reside in the evaluation component? Of course, but not only in that and from this point of view the art of Tursic & Mille which is not only logic but also intuition, however rich in possibilities, is still at a germinal stage, an ambitious project that will certainly find greater concreteness in the coming years, so that the anonymous pictorial material is consolidated more in the change of the traditional domain of painting: pornography, movie scenes of houses in flames such as Landscape that recalls the work of the Flemish Bosch, landscapes and abstract and geometric elements are configured as an overload of the production of images that we see every day.

Tursic and Mille, whose approach to art is both conceptual and pictorial, show us the manipulation, recycling and dissolving of images as if they were waste, as if to tell us that the project is outside the canvas, beyond the images, exploring the relationship between photography and painting. For the two original and ironic European artists, painting is an object and analyzes itself and its parts following the lessons of innovators such as Daniel Buren, Olivier Mosset, Michel Parmentier and the Support / Surface group.

Tursic & Mille have been nominated for the Prix Marcel Duchamp 2019.

Annalina Grasso: How were your works of art born? Why did you choose painting as an artistic application?
Tursic & Mille It was probably an alchemical solution, no one wanted to see the painting in France at the time, and so, we just knew what to do… so the program was to show them all the possible colors, and it seemed like it was the only thing for us to do. The question asked by Mario Merz, Che Fare? We have been working together for more than twenty years, I have the feeling that everything we do, that everything we have done, is built empirically, one painting takes another, in the creative logic of the workshop with a real desire to never freeze things, not to get stuck, not to forbid anything. The history of painting is a sure foundation, as Asger Jorn said, painting is the best food for painting. We face it sometimes in submission, sometimes in opposition … This is how a portrait made in 2000 ends up becoming a still life a few years later, just because we were attentive to the process of painting itself, because the subject may after all be the painting itself.

What do you think about your partnership?
It’s just like to work alone but at two, with a little touch of love.

What quality do you appreciate in each other?
Her tenderness, his bullshit building way of doing things (now you know who is the coolest one).

Does the work Landscape seem to portend an apocalypse taking inspiration from Saint Anthony or is it a reinterpretation of Bosch’s works on the temptations of the saint?
We are making painting today, with of course history of painting…. I agree with you, nothing changes, persistence of the same archaisms.

Who are your points of reference?
The apple and the snake.

What do you feel most innovative in?
Maybe doing our work today, I don’t know…

How would you define the relationship between your painting and time?
Painting is time… so I don’t really have the time to think about it!

Could the nature of your painting be defined as a synthesis of reality and of iconography?
We don’t really care, we are making paintings, maybe we are iconoclasts…

Can photography be painted? Can the two most important dispositions of the twentieth century be convincingly overcome, namely painting and photography? Isn’t there a risk of falling out of promiscuity?
Photography is an object, so yes, it will be a still life transferring in painting…Painting is not a photography, but it still an object… We don’t believe in a competition between the two mediums, painting is an old flesh and mind way of thinking the world, and photography is a great moment of capture (and often good models for paintings). And now there is internet… maybe the biggest change of the last 20 years…

Is your priority conceptual or pictorial intent?
Both, mental and Emmental, a good painting is both, according to us (This seemingly bizarre answer refers to the title of a recently created canvas entitled “The Emmental Thing”, where in the center of the canvas a piece of Emmental cheese is painted, hence the play on words “the thing is mental”)

How important is it for you that your projects are also understood by those who are not in this sector?
We know what we have to do and have great confidence in the intelligence of the public, in addition, thanks to the painting, there are several levels of reading 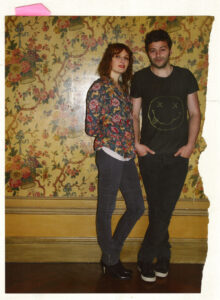 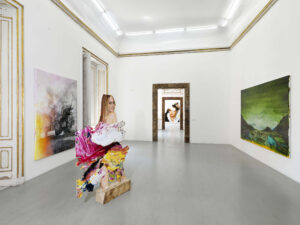 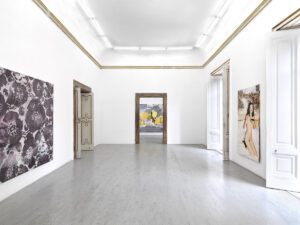 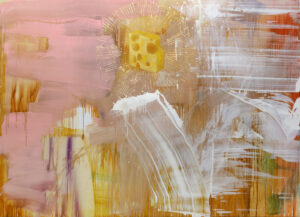 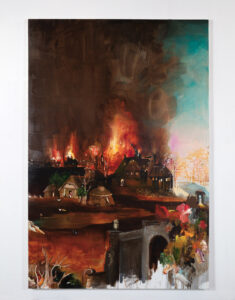