Lida Goldoust. Nature as a sen..

Garage Museum of Contemporary Art (Moscow, 9/32 Krymsky Val st.) is a non-profit project supported by The IRIS Foundation. It was founded in 2008 by Dasha Zhukova and Roman Abramovich as a place for dialogue, training, reflection, archive; in particular, the intent is to focus on Russian art from the fifties onwards without forgetting the comparison with contemporary international art. The current director is Anton Belov.

Now, although the library and museum spaces are temporarily closed due to the ongoing epidemic since 13 November, the café and bookshop remain strangely open to visitors. However, on the program, we find two events awaiting the reopening: the first is scheduled until January 17, and is the second edition of “Garage Triennale of Russian Contemporary Art – A Beautiful Night for All the People”, a great commitment to support of the development of Russian contemporary art. The project of this edition is signed by Valentin Diaconov and Anastasia Mityushina.

In addition, Garage Museum hosts, until March 14, 2021, “Moving Atmospheres” an installation by the Argentine artist Tomás Saraceno. The artist is famous for his very technological and visionary installations, for an innate ability to dominate space and make it enveloping, for the ability to involve people, attracting them to a spectacularization not of surface, but of substance. In particular, with this partially mirroring sphere suspended in the air, the author imagines a world free from the polluting use of fossil fuels and free from predatory and oppressive capitalism. To the ecotraumas produced by anthropocentric man, Saraceno proposes the vision of a new era called Aerocene, when the ecosystem will prevail over the forcing and destruction imposed up to now by the human being against nature. All this also brings to mind the projects of the PAV of Turin and a lot of ecological art that fortunately is gaining ground throughout the West.

With this installation Saraceno takes a step forward towards this new era, working for the first time with a material that places sculpture as a working prototype of a balloon that is able to float around the world, powered only by the air we breathe and from the heat of the sun. The use of ETFE, an extremely resistant translucent polymer, indicates that the work of art makes a crucial step in the development of aerosol flights, a unique undertaking that opens up future horizons and that can make us travel (with the mind) even further the known planets of our galaxy. Already in 2015 Saraceno had reached the world record for the first and longest solar-powered flight. Then, to get to further crossings and borders, in the last ten years, he has started collaborations with scientific institutions of the highest prestige, including the Massachusetts Institute of Technology, the Max Planck Institute, the Nanyang Technological University of Singapore and the institutions of Exhibition Road Cultural Group, among which we remember the Imperial College and the Natural History Museum in London. Still on the wave of this visionary nature, we must remember that the author was the first to scan, reconstruct and re-imagine the intertwined habitats of spiders and that he owns the only existing collection of three-dimensional cobwebs.

These are the premises to understand how “Moving Atmospheres” is not just a project produced by a bizarre mind, but must be considered the link in a much broader and really long chain and which must lead to a goal that everyone can share: living in a better world. 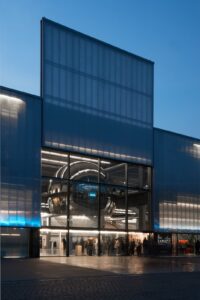 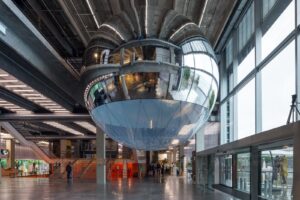